The construction of weather.

Is anyone else paralysed by difficult weather? - As I wrote that I struggled for the right adjective. Weather is simply weather; we describe it as ‘good’ or ‘bad’ according to our own construct of it. And that construct can change over time.

For instance, the recent snow and ice saw me stuck at home. The path from the doorway of my flats to the street was sheet ice and I already have one broken finger - I don’t need a second. But if my grandsons had been here they would have been undeterred by a little ice (they would probably have made it slippier by sliding on it) and I would have clung to the railings beside them so we could reach the park to play snowballs. Snow, for most children, is a playground. For me, it cuts me off.

I know people who are comparably deterred by strong sunshine. The second the sun appears. I’m out there. The slightest glimmer and I’m smiling. But for some the heat is enough to send them to a darkened room - anywhere that might be cool.

However, do we reflect that in our writing? I am sure we have all read (and maybe written) storm scenes with the assumption that they are the context for something terrible to happen. I can’t think of anything I’ve read that includes a character who is energised by wind and rain, thunder and lightning.

That may be an extreme example - but we can’t make assumptions that our characters, or our readers, share our construct of ‘good weather’. And so I know I can only speak for myself when I say that the recent snowstorm made me want to hunker under the duvet for a couple of days until the sun shone again.

Maybe there are even people who look at this picture and wish it included some shade. (Those aren’t rocks, by the way - they are seals. And this was taken in the Galapagos.) 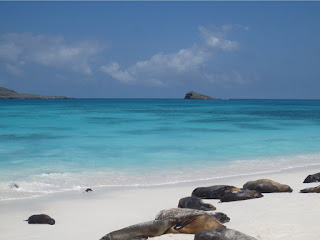 Chris Longmuir said…
Jo, can I make a plea that you add your byline to the title. I had no idea whose post I was reading until I went up to the list of author contributor dates. Not all readers will do this. And I did enjoy reading it.
26 March 2018 at 12:16