of Carts and Horses

I love the adventure of writing a novel. I've heard it said that it is like driving with dipped headlights: enough light to see for the next few yards, trusting that, if you just keep going, there will be road enough ahead to take you to your destination.

When I first tried creative writing, I expected to be able to produce some short stories and a poem or two, maybe some memoir stuff. But not a whole novel. 'I could never imagine a whole plot,' I said to my writing tutor. 'You don't have to,' said she. 'Create some characters and they will tell you the story.'
I thought this highly unlikely - and I accept that it probably is so for some authors - but was amazed to find that it does work for me.

A few weeks ago, I started my fifth novel. I knew it was going to be a time travel one, with some modern characters and some from a hundred years ago. I knew the name of one of the characters because it was finding out about her (my great-grandmother, whom I never knew, as she died long before I was born) that triggered the idea. But, other than that, it was a blank slate.

With all the nostalgia about the First World War the past four years, I thought something about that would probably come into it. Maybe the suffragettes ...

I got going and trusted the process. And it still works. Phew! I now have 13.5k words (four chapters) and, more importantly, three main characters from the different eras, plus an emerging group of supporting characters. I have created files/character studies for each of them and these are evolving as the interaction between them triggers the development of their characters and their back stories.

Is this the cart before the horse? I did a fiction workshop course at Edinburgh University some ten years ago when I had just completed my second novel. We practised creating characters and writing up their appearance and health, education and employment, family and relationships, even their religious/political views. At the end of the course, I had four extremely detailed characters which I decided to use for my third novel (Eleanor's Journey). When I got to the end of writing that novel, I looked back at my course-generated characters and compared them with the ones in the novel. You've probably guessed: there was little resemblance! They might have started off pretty similar but had soon taken matters into their own hands as the action and interaction gathered momentum.

My fourth novel (The Ghost of Erraid) grew out of interest in a setting (The Hebrides) and a vanished way of life (lighthouse-keepers and their families). The characters just appeared along the way and I totally loved them - most of them. Now, with my fifth, I am just at the start of a new adventure and looking forward to meeting, getting to know, and watching the development of the characters. Such fun!

Complete non sequitur: As I write this blog, it is snowing a blizzard here in Central Scotland and we have about a foot of snow. Tomorrow, we are led to believe, is to be just as bad, maybe worse. It is also the first day of spring!  I have a vase of daffodils (Happy St David's Day) at my kitchen window which is looking out on deep snow in the garden. Two seasons in one! 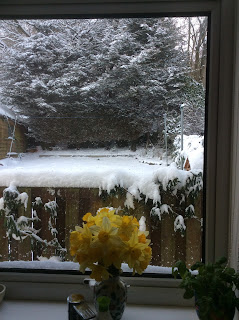