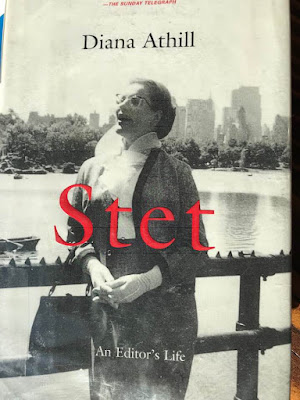 I “found” Diana Athill rather late in my reading life, and I have V.S. Naipaul to thank for it.

A week after Naipaul’s death, Athill wrote an essay about being Naipaul's editor. She described admiring Naipaul’s work but disliking the man, and there was such certitude in her storytelling voice that I was immediately hooked.

I hunted down Stet. Part historical overview of British publishing, part break-room office gossip, it was riveting. Athill had been a well-regarded British editor for fifty years, and her own literary career took off after her retirement; this book was published when she was 83 years old. When I read Stet, Diana Athill was already a hundred years old, yet meteoric in the British literary scene. She became my hero; this rare, ageless female writer, one who discusses literary nuances and sexual romps with great pleasure.

Athill’s editorial training is evident in every crisp, well-crafted sentence. When she announces her inability to care about money – and as most writers earn so little from writing that financial optimism seems a prerequisite for this profession -- she phrases it delightfully so: “Somewhere within me lurks an unregenerate creature which feels that money ought to fall from the sky, like rain. Should it fail to do so – too bad; like a farmer enduring droughts one would get by somehow, or go under, which would be unpleasant but not so unpleasant as having blighted one’s days by worrying about money.”

She has chapters for the writers she edited -- Naipaul, Rhys, Updike – and through her, I discovered the enchantment of The Wide Sargasso Sea. Jean Rhys had a troubled life and left the world some exquisite prose, and Athill has a great deal of respect for even the most difficult of writers :

“The chief difference, it seems to me, between the person who is lucky enough to possess the ability to create – whether with words or sound or pigment or wood or whatever – and those who haven’t got it, is that the former react to experience directly and each in his own way, while the latter are less ready to trust their own responses and often prefer to make use of those generally agreed to be acceptable by their friends and relations. And while the former certainly include by far the greater proportion of individuals who would be difficult to live with, they also include a similarly large proportion of individuals who are exciting or disturbing or amusing or inspiring to know.”

Athill’s imaginary world was boundless, and she looked for writers who opened hearts and minds, especially in difficult times:

“...why books have meant so much to me. It is not because of my pleasure in the art of writing, though that has been very great. It is because they have taken me so far beyond the narrow limits of my own experience and have so greatly enlarged my sense of the complexity of life; of its consuming darkness, and also – thank God – of the light that continues to struggle through.

Stet is an apt title for her memoir; from the Latin “let it stand” it is used on corrected manuscripts to indicate that a correction or alteration should be ignored. This book was, in her own words, meant to live on even after her own life was erased, so that she would “feel a little less dead if a few people read it”.

More than a few people have already read Stet, and those that haven’t yet, a treat awaits.

Thank you for your words, Diana Athill. The literary world is an immeasurably better place for having had you in it.

Dipika Mukherjee is a writer and sociolinguist. Her work, focusing on the politics of modern Asian societies and diaspora, includes the novels Ode to Broken Things (Repeater, 2016) and Shambala Junction (Aurora Metro, 2016).

Umberto Tosi said…
It's a pleasure to read this vivid homage to one of our profession's true giants - not unsung, but insuffienctly celebrated. You bring out the powerful, imaginative, creative spirit with which she infused all of her work.
26 January 2019 at 07:21

Griselda Heppel said…
Thank you, Dipika, for seizing the moment to pay homage to the great, GREAT Diana Athill, one of the sharpest minds and most original writers I've ever read. Her autobiography Stet bowled me over - her ability to spot, nurture and sum up the characters of her authors is faultless, and her own writing style spare, clear-eyed and understated. Her heart-breaking short stories put her right up there with Elizabeth Taylor, Katharine Mansfield and Edith Wharton.
Stet left a huge unanswered question (as Athill intended!). If her difficulty with V S Naipaul (clearly a tricky character himself) constituted the 'second-worst' misjudgement she made in her publishing career, WHAT WAS THE WORST? Did she turn down J K Rowling? Jacqueline Wilson? Colin Dexter? We will never know.
Wonderful post! You evoke Athill's brilliance vividly.
26 January 2019 at 15:00

Dipika Mukherjee said…
Griselda, yes! I still have more of Athill to discover so I was hoping that she reveals this great mystery—perhaps a hint? — elsewhere. I look forward to reading her entire body of work now.
26 January 2019 at 16:48

Dipika Mukherjee said…
Umberto my friend, thank you for reading and sharing always...your literary citizenship is emulation worthy indeed! Susan, get a copy of stet soonest :)
26 January 2019 at 16:50

Umberto Tosi said…
Thank you, Dipika. It's always a pleasure to read your work - and to be privileged to be a contributor to this esteemed group of authors, colleagues, and friends! (BTW - As I approach 82, my favorite line in this post is where you point out that Stet was published "when she [Diana Athill] was 83.")
26 January 2019 at 21:23