By Enid Richemont - October 28, 2019
I have already posted this on Facebook, so lazily scooped up the info and popped it in here, too. I hope some of you might be interested enough to grab a free copy, and if so, that you enjoy reading it.
http://www.amazon.co.uk/dp/B00846FYX0

There is SO much more to say about both the house and the story. The house itself, with its strange and magical name: "Chanteloup", is in the Vendee region of France, and quite remote. It belonged to our Parisian friends who came from that region, and had been in their family for an incredibly long time. When we first went, it was, of course, with them, and quite a long time ago. Later, at their generous invitation, we returned twice, to take holidays there, which was when I made the drawing of it below. 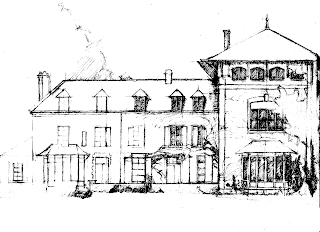 The house was extraordinary, and almost unchanged since the 1930s (we did NOT attempt to take a bath!) Much of it is described in the novel. It had once been a swamp area, infested with mosquitoes, hence a high instance of disease and early death, and during our second holiday there, I did indeed get very ill - one of those flu-like illnesses with a high temperature - which made the house, for me, even more atmospheric, so a haunting was easy to imagine, and the lake in the grounds (not as big as I've made it in the story) felt really sinister.

As Halloween is approaching, I'm running a promotion on "WOLFSONG" - from October 30th - November 1st, the ebook is free. It was published as a Young Adult novel, but according to one author friend, could easily be cross-over, so if you love rural France and very old houses, it might well be your thing.
The house is real, and had a chaotic history, continuing to the present, when someone tried, and failed, to run it as a hotel. It was then abandoned, fell into disrepair and ultimately vandalised, then there was a major fire. Do houses have souls? I think this one has. Nearly wrecked during the Revolution, but (the story goes) defended by a furious old lady who climbed into an apple tree and hurled fruit at the trespassers.
http://www.amazon.co.uk/dp/B00846FYX0

Still on the theme of old houses, but this time England and Jane Austen, I'm currently reading Jo Baker's "Longbourn" - a Jane Austen-type story told from the point of view of the overworked household staff, and it's very, very good. Does anyone know the word 'skivvy'? I can remember my mother using it to describe someone, always female, who was exploited workwise, and she actually had memories of young female relatives who were put 'into service', with one of them quite literally worked to death - we had one of those faded sepia photos of her looking very young and very frail, and she was called, so appropriately, 'Lily'.

One of the main characters in 'Longbourn' is referred to as 'the skivvy', a maid of all work. I remember my mum using it as a verb, too - "I'm not skivvying for you!" Another character in the novel is the son of a slave woman, who is later adopted (as a servant, of course) by the family, even given the family name, but as a family possession, not a legit member, and taken back to England. I'm sure that Chanteloup, in its heyday, had its skivvies. It certainly had a washerwoman.Our friend, remembered, from when he was a little boy, her coming in to do the laundry every week - all those fragile linen sheets and tablecloths, and all those picturebook bubbles!

Rosalie Warren said…
Hi Enid. Thanks for this interesting post. I read 'Wolfsong' some time ago and enjoyed it a lot. It's fascinating to hear about the real house behind that story. I strongly agree that houses can have souls. As for 'skivvy'- my mother used to use that phrase too, and talk of 'skivvying around', meaning doing the household jobs. Good luck with the promotion - I agree the book would work for adult readers too.
28 October 2019 at 09:01

Sandra Horn said…
I have a wonderful photo of my Grandmother in her black-and-whites, looking as miserable as sin. On the back, she wrote 'When I worr a skivvy'.
Facinating post, Enid! Wolfsong is coming with me to the Lake District on Friday!
Happy Birthday! x
28 October 2019 at 09:19

Umberto Tosi said…
And, being a Yank, I always thought skivvies were underwear! Thanks for the amusing post. I look forward to reading "Wolfsong!"
28 October 2019 at 18:33

Enid Richemont said…
Hope you'll enjoy the book, Sandra, and the Lake District, too - so beautiful.
The washerwoman image has always stayed with me, and I've always 'seen' her as a large woman with massive elbows pounding the suds, with bubbles floating skywards. An illustration from a long-ago children's book, perhaps? Must have been exhausting work, though.
28 October 2019 at 21:54

Bill Kirton said…
Yep, Skivvy was a well-used term in our house when I was a kid (although I haven't heard it since my elevation to the middle classes). We also spent a year in an atmospheric house in the Midi when my wife did an exchange with a French teacher. In fact, it was a presbytère and had a cimetière attached. Many of the graves carried little plaques bearing the message 'J'ai prié pour toi à Lourdes' (which struck me as being a bit ironic). Looking forward very much to reading 'Wolfsong'.
29 October 2019 at 11:18

Ann Turnbull said…
Yes, skivvy and skivvying were words used by my mum (from Hertfordshire) and the women where I grew up (Kent).

I must read Wolfsong! Have a feeling I may have bought it a while ago on my old Kindle (which probably still works) but don't think I got around to reading it.
30 October 2019 at 11:07