There’s a wonderful clip on YouTube that shows an octopus disappearing into the background and becoming, as a consequence, invisible. This is an attribute shared by other cephalopods such as the cuttlefish, one of which I met whilst snorkelling in Indonesia.
The water there is very clear, and the colourful marine life is plentiful and varied. I had a great time, swimming through shoals of tiny iridescent green fish, followed by shoals of even smaller blue ones. The seabed was packed with anemones and clams and coral and seaweed, in every colour and design you can imagine. Absolutely beautiful. And then, it seemed to me, a part of the sea floor about the length of my forearm detached itself and started to move in a sedate fashion beneath me.
Intrigued, I swam closer, only to realise that it was a creature of some sort, as it seemed to have some small tentacles at one end. Eventually I got bored, as it wasn’t doing anything interesting, and I swam off. I continued my tour of vivid pink starfish and lemon yellow seashells until I realised that something was behind me. I turned in the water to get a better look, only to see my piece of sea floor had transformed itself into a stripey thing with two round blue eyes that were watching me with great interest in what seemed like rather a friendly sort of way. We remained like that for a couple of minutes, sizing one another up, and then it turned and swam lazily away. I had no idea what I’d seen until I mentioned it to our guide, who got quite excited and told me I’d had an encounter with a cuttlefish.

This started me wondering about what might happen if a land-dwelling creature with malevolent intentions were capable of the same act of disguise. I wrote a book for reluctant readers called The Tree Devil, which I illustrated myself and was published by E-Print, and I base the story around a mad scientist who decides to rid the world of human beings due to their catastrophic impact on the environment. He had used an octopus’s invisibility ability to create a dedicated predator that will only eat human beings. Unfortunately it’s not available in digital form, but it starts like this:

I was on my way home from school when I saw the oak tree move. I don’t mean it lifted up its roots and walked. I don’t mean it tried to hug me to death with its branches. It wasn’t like that at all.
The bark of the tree began to bend in an odd sort of way. It was as if there was another shape inside, trying to get out.
I just stood there, and stared. The bit that was moving looked exactly the same as the bark. Brown and grey, with zigzag cracks. Then I thought I could see the body of an animal. It wasn’t any animal I knew. The legs ended in big flat feet, like flippers, with claws on the toes. It looked a bit like a toad – but a toad that stood on two legs, and was the size of a grizzly bear. Then it saw me, and froze.
The moment it stopped moving, I couldn’t see it any more. I wondered if I was going mad. In the end I decided it must have been a trick of the light, so I stepped right up to the tree, and ran my fingers over the bark. It felt cold and hard, just like a tree trunk should feel. And then it started to feel a bit different. Smooth and slimy, like frog’s skin… 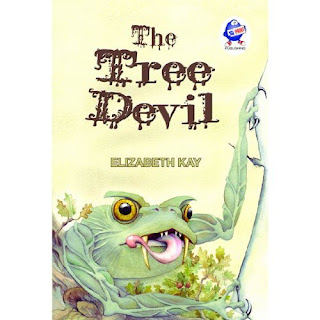 There are all sorts of wonderful senses and abilities that animals have that we don’t, and there was a paper published by American philosopher Thomas Nagel, called WhatIs it Like to Be a Bat? For lots of other ideas about weird biological oddities, I’d like to recommend Olivia Judson’s book Dr Tatiana’s Sex Advice to All Creation. Witty and humorous, this is the blurb:

If you have ever wondered why women always bite your head off or why one guy gets all the girls, if you have ever pondered why some men bring you balloons while others leave you their genitals, then this is the book for you. It explains all this and much more. It discloses the best time to have a sex change, how to have a virgin birth, when to seduce your sisters or eat your lover. Quirky and brilliant, it takes as its starting point all creatures great and small worried about their bizarre sex lives, and the letters they write to the wise Dr Tatiana, the only agony aunt in all creation with a prodigious knowledge of both natural history and evolutionary biology.

I’ve messed around with a lot of creatures in my fantasy books, and sometimes combining several different characteristics can give you really bizarre animals that are uniquely your own. Try it. It’s fun.

Umberto Tosi said…
Delightful! Thanks for reminding us that we need not travel in space to encounter bizarre species with super powers, just look around us more keenly!
17 October 2019 at 13:48

Susan Price said…
True, Umberto -- and Liz also reminds us, with her curious cuttlefish, that the best intelligence on the planet isn't found in the human race! If we needed reminding...
18 October 2019 at 07:54

Elizabeth Kay said…
Thank you both. I think one of the most interesting creatures is portia, the spider that is capable of complicated decision-making. https://www.youtube.com/watch?v=UDtlvZGmHYk