So October is here, and as well as bringing with it an eye operation which I'm trying not to panic about, the next steps in integrating two new cats into the household, and my older son's 40th birthday, which has come round very much sooner than I expected, this means National Novel Writing Month is just round the corner.

Partly because of the impending eye operation, I wasn't sure I would be able to take part in NaNoWriMo at all, or at least not to complete the challenge successfully, something which I would have found hard to live with after more than a decade of reliably churning out 50,000 words every November. However now that I have an early October date for the eye thing it seems a bit more feasible. I've also now managed to decide which of two projects I want to work on next. At one point it had seemed as if I would have to go into 'NaNo rebel' mode and work on a bit of each of them, which I would also have found unsatisfactory. As they are both historical projects and require research into different periods of history, mental overload was quite on the cards.

Now that I've made up my mind, I've done a bit of related research, which of course will prove not to be nearly enough once I find I urgently need to know how long it would take to get from Rye to Hastings using a really rickety old horse and cart, or what it was like living in northern France in the years after the Napoleonic Wars.  I've even started an outline consisting of a couple of pages in a notebook. This is more than I usually do for my present-day mystery novels, for which it's all I can do to work out a beginning, never mind a middle, and don't even mention endings. I always give a hollow laugh when someone says something like, 'Of course you must be so good at plotting to be able to write mysteries'. A reviewer even commented favourably on the plotting of one of my recent mysteries that had been a nightmare to write and needed drastic restructuring during the edit before it even made sense.

I may yet make a more detailed outline for this one, in the hope that this will make it easier to do the writing when November comes. I am not entirely optimistic about this, having once attempted to outline using the Snowflake method. The resulting novel was probably the worst one I've ever written, as well as the least enjoyable to write. But in defence of the Snowflake method, I must confess to not having the stamina to embrace it fully. My efforts produced something that was more like a snowball than a snowflake, in that the goodness in the centre, such as it was, became compressed beyond recognition when I added the subsequent layers instead of producing delicately formed offshoots and getting more and more beautiful, which I assume is the point of naming it after one of nature's wonders in the first place. Or perhaps I had inadvertently invented the Snowdrift method, in which the original idea is quickly covered by random whirling flakes of other ideas and you don't see it again until everything else has melted away and it is left in a puddle of rapidluy melting slush. 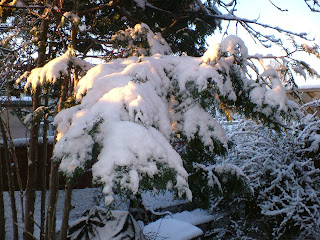 My version of an outline is quite a bit less organised than any of those. At the moment, for instance, I have a sentence or two about the main plot idea, a list of the characters I  know from the 2 previous novels in the series plus the new ones I already know about, and a short (too short) summary of the story, divided into possible parts/chapters. It's already evident that I haven't much idea of what happens in the middle! - but there's still time to work it out before November. Even if only in my head and not in the form of an intricately constructed yet transient thing of beauty.

In other news, I've achieved my ambition of becoming a crazy old cat lady, so there will be more pawprints in the snow this winter.
(apologies for the slightly unseasonable pictures. 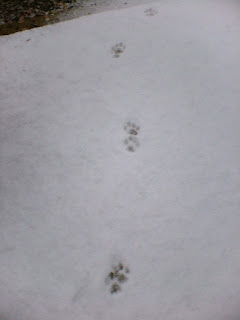 Umberto Tosi said…
Best of luck with the eye surgery and the new novel! I had ocular implants (artificial lenses) ten years ago, and it turned out to be a breeze, and resulted in overnight, extraordinarily restored sharpness of vision! As for writing - with snowballs or pens - I like to think of the Stephen King aphorism: “The scariest moment is always just before you start. After that, things can only get better.” So true, but I still tense up at the start, no matter how much I've written. Just leap through that threshold!
5 October 2019 at 10:58