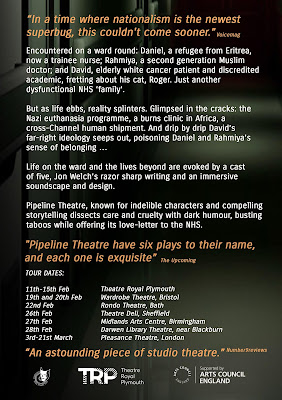 I'm opening this post with a little publicity for a Pipeline Theatre production, currently on tour. It's called "DRIP DRIP DRIP, and it toured the South-West of the UK last year. Now it has its first London booking, at The Pleasance Theatre, Islington, so I'm hoping London-based followers of our blog will come.

My daughter is an active founder member of the very successful Pipeline collective which has already showcased work in the Edinburgh Festival. It specialises in bringing our attention to difficult and often challenging subjects, and "DRIP DRIP DRIP" is no exception, taking a very hard look at racism in our NHS medical system, especially now, when the UK has split from the European Union, and following every performance there's a discussion panel if you feel like taking part. Pipeline routinely gets excellent reviews, so if you can, please go. Oh, and there's a discount on the ticket for anyone working in the NHS.

I was given books for Christmas, among them two very different novels which I'm now reading (had other stuff on the menu before.) The first to be finished was Salley Vickers' THE LIBRARIAN, a book so 'quiet' (to use a current and awful publishers' rejection excuse) that I almost gave up on it, but so glad I didn't. Set in the late 1950s, not a period I'm especially fond of, and in a very English small town (likewise), I became slowly seduced, as was the main character, Sylvia, by both the setting and the people (in Sylvia's case, one person in particular), but eventually by Sylvia's passion for children's books. It's her job to ignite a passion for reading in the town's kids, but with a run-down and neglected children's library, this wasn't easy. So many wonderful children's books are mentioned in the text that there's a recommended reading list at the end of the novel. Anyone remember Philippa Pearce's "Tom's Midnight Garden"? Or the adventures of Professor Branestawm with his multiple spectacles? T H White's "The Once and Future King"? And for me, the most intriguing "My Friend Mr Leakey", by Professor Haldane, which I shall now have to order. If you love children's books, if you have children or grandchildren, do, do read "The Librarian" and you will be richly rewarded.

The second novel, which I'm about halfway through, is Zadie Smith's "N-W", set in Brent, North London - Willesdon. Her ear for dialogue is amazing, but her obviously accomplished writing skills are getting in the way of the story for me. With writing this good, it can happen, and the fault lies probably with me, the reader - drifting seamlessly into a story is so much easier.

And on the subject of stories, whenever my mum thought I was fibbing, which I probably did with great frequency, she'd say I was telling stories. In fact, my mum's word for a 'lie' was a 'story', so how this fitted in with the stories she read to me I don't really know, but wait! I do! Stories printed between the covers of books are respectable, and made up by authors, so that's OK, then.

Casting its ugly shadow over this argument, though, is current "fake news" and its ilk, where the basic fact that it's 'published', and so out there and available, automatically makes it 'true' (or at least worth our consideration.) Freedom of speech is a hard one ethically. A racist children's book published during the time of Nazi Germany has, apparently, been recently made available by Amazon, in spite of complaints, and vicious trolling on Twitter continues unabated. On humanity - when it is good, it is very, very good, but when it is bad, it is UNSPEAKABLY horrid!

Sandra Horn said…
You will love My Friend Mr Leakey', Enid! We had a copy so old and battered with many readings that it finally fell apart, but luckily a new edition came out a few years ago.
28 February 2020 at 09:35

Griselda Heppel said…
Well, Sally Vickers is clearly of the same generation as I am, judging by the book titles. I bet she also includes Noel Langley’s The Land of Green Ginger and Norton Juster’s The Phantom Tollbooth, two huge favourites of
Mine. It sounds a charming book. Though I have to admit my son and I gave
Up on Tom’s MidnightGarden after chapter 10, when still nothing had happened. Children’s books were definitely both slower and quieter then.
29 February 2020 at 06:11