The first time I saw Arturo Toscanini was on a then state-of-the-art, 16-inch, Philco TV set at Frank Puglia's house in Beverly Hills, where my mother and I were regular Sunday guests. It was in the early 1950s. Toscanini was featured on a then-special, coast-to-coast broadcast with a stellar cast, conducting the NBC Symphony Orchestra (specially created for him by the network, now the New York Philharmonic.) performing Giuseppe Verdi's Aida, live from New York. The white-haired, mustachioed, octagenarian maestro electrified viewers even on that a fuzzy black-and-white screen that seemed otherworldly. I was 12 or 13 years old at the time, but knew I was watching history.

Besides having been a musical genius who changed the fundamental of the way orchestras had been conducted, Toscanini was a genuine, anti-fascist, World War 2 era hero, a larger-than-life link to great composers of the 19th and early 20th centuries, having led the world premieres of operas by Verdi and Puccini to name a few. The great conductor had spit in Mussolini's eye back in the then-recent 1930s by refusing to perform Giovinezza (the Italian Fascist Anthem) at La Scala Opera House in Milan. Mussolini's Blackshirt thugs beat up the great conductor shortly after that, which prompted him to taken refuge in America.

I knew a lot of this from a character actor named Frank Puglia, a dutch uncle in my opera-singer mother's extended family of Hollywood creative types. I saw a lot of Puglia in person and on-screen as I grew up in 1940s-50s Los Angeles. He was a piquant storyteller, a mentor, and a dispeller of pernicious Hollywood myths. Listening in on Sunday afternoon dinner salons at his house, I learned about theater and literature and Italian history, irony and human nature itself.

Puglia was by then a long-established actor, who might well have been a writer for all the stories he loved to tell of life on stage and behind the scenes, the silver screens and - now - the magic-box of TV that would change the world from which he came. Himself a real-life, near-legendary screen figure, Puglia seemed to know about everything, especially how to charm an audience or his frequent guests. I remember him as a dashing, slim, balding figure in his sixties - how I'd like to be when I - someday in the almost inconceivably remote future - "got old."

I had seen him in a good dozen films, not half of the 240 films and television features in which he performed over his 83-year lifetime. His acting career began on the Italian-language stage that thrived in New York, Chicago, San Francisco, and Los Angeles into the 1950s. He had started acting at the age of 15 and continued well into the 1970s on TV. His movie career had begun in 1921 with a role in "Orphans of the Storm" starring Lillian and Dorothy Gish, after the film's director, D.W. Griffith saw him on a New York stage.

I still get gooseflesh recalling when my mother took me to a re-release of the 1943 Phantom of the Opera starring Claude Rains, with Puglia as conductor of the Paris Opera. My opera-singing, movie-junkie mother, met Puglia and his wife, Irene Veneroni, while herself performing in those Italian-language plays. He and Irene attended her opera performances as well and she became a regular Sunday guest. They all belonged to a circle of mostly Italian American musicians, singers and actors who made a living - when they could - playing parts in the hundreds of films produced by Hollywood studios during their 1920s-1950s heyday. Some - like Puglia - continued on to television through the 1960s and 70s. Puglia himself was the grand duke of this circle - whose images and names I still see in classic films on cable TV channels - e.g. Renata Vanni, Esther and Silvio Minciotti, Vito Scotti, Tito Vuolo.

He excelled in both comedies and dramas, playing an array of characters, and ethnic types: priests, bartenders, scientists, drivers, madmen, policemen, librarians, jailbirds, sea captains, chefs - you name it. He had a particular gift for parody. But he refused roles as obsequious peddlers, mobsters, and other Italian stereotypes. Although some of his portrayals may seem unintentionally melodramatic or comedic by today's standards, more often he used his gifts to add dimension and piquancy of each role that he played, no matter how small. He was known for bringing an inner dignity to his characters, in the manner of better-known actors like Gregory Peck, whom he admired.

The charismatic Puglia was a notorious scene-stealer - as "Signor Ferarra" a convict pleading for parole in Jules Dassin's 1947 noir classic Brute Force, starring Burt Lancaster. Next time you see Casablanca watch for Puglia playing a memorable Moroccan silk dealer who offers Ingrid Bergman a discount as "a friend of Rick's."

He was one of those personalities who invited my young, formative self to look beneath and beyond surfaces and what I was told, for example, how often those most downtrodden and disinherited produce a culture's most brilliant minds and insightful literary geniuses. He cited his own native Sicily as a prime example - from where many of Italy's greatest writings came - Luigi Pirandello, Giuseppe di Lampedusa, and Salvatore Quasimodo, for example.

His backstage stories were layered with play-within-play, Pirandello-like irony - reminding me of Velasquez's poly-perspective insets. They show up in the funhouse mirrors of my own bent stories - in "The Klutz Soprano" chapter of Sometimes Ridiculous, for instance.

Right now, I'm playing with one that begs to be expanded into a short story. Puglia and his wife Irene often played opposite each other on the Italian-language stage in New York of the 1920s and early '30s. They had an argument one day that they carried on right up until curtain time of a play that featured them as a combative couple. They channeled their anger into the performance, escalating until they were heatedly ad-libbing their own beef into a bedroom spat scene. Members of the audience murmured in apparent confusion as the spat got out of hand.

The scene called for Irene to storm out of their bedroom, which she did with fury. She slammed the door so violently, in fact, that the entire canvas wall of the set began to sway and finally collapsed onto the stage around them. Puglia smile, turned - re-enacting the moment as he related the story - and said, "La commedia é finita!"  Opera lovers will recognize that as the ironic last line of Leoncavallo's I Pagliacci. spoken by the jilted clown Canio after he has stabbed his true-love Nedda and her lover to death on their Commedia del Arte stage-within-a-stage. Roughly: "the show's over." Or as Porky Pig would say. Puglia looked at my mother and me, and added, grinning his impish trademark grin and added: "But the comedy is never over, my friends!"

At this point, I pray that is true. I like to think that, and of stage stalwarts like the Puglias and Toscanini, undaunted in their creative work and holding to principles through times of tragedy, now, especially, in this time - decades later - when the most loathsome and corrupt of us seem to have risen to inordinate power once again in our world. The comedy is never over. The struggle is never over either.

(This article is revised from one of the chapters I wrote for Dream Streets: The Big Book of Italian American Culture - Lawrence DiStasi, editor, Harper & Row, 1989) 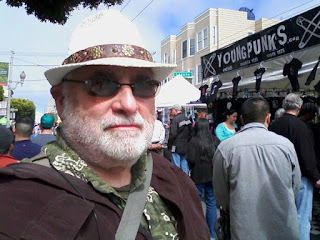 Umberto Tosi is the author of Sometimes Ridiculous, Ophelia Rising, Milagro on 34th Street and Our Own Kind. His short stories have been published in Catamaran Literary Reader and Chicago Quarterly Review where he is a contributing editor. He was contributing writer to Forbes, covering the Silicon Valley 1995-2004. Prior to that, he was an editor and staff writer for the Los Angeles Times and its Sunday magazine, West. He was also the editor of San Francisco Magazine. He has written more than 300 articles for newspapers and magazines, online and in print. He joined Authors Electric in May 2015 and has contributed to several of its anthologies, including Another Flash in the Pen and One More Flash in the Pen. He has four adult children. He resides in Chicago. (He can be contacted at Umberto3000@gmail.com
Posted by Umberto Tosi at 00:00

Umberto, you are a mine of wonderful stories of real people - I loved learning all about Puglia, who I’d never heard of, with insights into your rich artistic, musical and Hollywood film childhood. No wonder you’re a writer! Toscanini I had heard of (mainly as the conductor of Disney’s Fantasia 😊) but had no idea of his heroism against Mussolini. What a brave man as well terrific conductor. Thanks for this excellent post.

And from a British point of view, how poignant to read about a truly vibrant multi-culture society as we sink into the depths of Little-Englanderism. Please God don't let your Boris-clone do it too much damage...

Wonderful! What a story! Thank you, Umberto!

Great stuff, as usual, Umberto. Thanks. Oh, how I wish I'd been in the theatre to see that Puglia and Irene scene you describe.

Such a wonderful journey through a fascinating era full of marvelous people. So enjoyed reading this!

clarabenet90@gmail.com said...
This comment has been removed by a blog administrator.
4 February 2020 at 01:57

Hi Umberto, what a rich cast of characters, and they were real people to boot!

Thanks for sharing your personal connection to all of them. I can see how their stories would be influential for any writer.