Seeing – or not seeing – things rather differently, by Elizabeth Kay

I booked a New Year’s hotel break for myself and my husband in the Lake District, somewhere I’d never been before. I didn’t realise I’d chosen a hotel that caters mainly for the partially-sighted, and it was a revelation. The staff were the nicest, most caring people I have ever met, without exception, and the building, although elderly, was designed with the blind in mind. The notices were all in Braille, as well as conventional script, and the paths outside all had handrails. There were guide dogs galore, the best-behaved dogs you will ever see, who frequently knew one another but never let anything distract them when they were at work. The exception, I was told, was when people stayed for Christmas, and the dogs had their own presents which arrived in a sack that they instantly recognised. They were allowed to go mad for half an hour, after which they all went straight back on duty. I was surprised by the upbeat atmosphere – and boy, did everyone know how to party when it came to New Year’s Eve! We really enjoyed being able to assist in small ways every so often, and there was a boat trip and a visit to Beatrix Potter World.


Beatrix Potter has always fascinated me, as she was a multi-talented woman way ahead of her time. Many years ago I saw an exhibition of her illustrations. Not Jeremy Fisher and Peter Rabbit, but her precise and detailed watercolours of toadstools, many of which are still used by mycologists today. She was scientifically accurate, and discovered the fact that fungi reproduce with spores. No one believed her, because she was a woman. She also led the way concerning the preservation of rare sheep breeds and local farming practices, and bought up a lot of land which she left to the National Trust. The exhibition consists of models of her characters, in beautiful settings. They can all be touched and stroked, and the building is full of sounds and smells as well.  It would work equally well for the deaf, and was thoroughly delightful. Outside we went into the garden, where they grow many different herbs, all there to be smelled and touched. The garden won a gold award at the Chelsea Flower Show a few years back, What hadn’t occurred to me was that partially-sighted people can find their way around a garden by the scent of the flowers, and strongly-scented herbs at the top of a flight of steps are an important safety feature. It was a highly educational visit, and enjoyed by all.


Meals were an important element of the holiday, and the staff were always there to ferry cups of coffee and make toast. It wasn’t gourmet fare, but it was of a high standard and plentiful. The bar was surprisingly cheap, and there was free Prosecco and whisky to welcome in the New Year. There was entertainment, too, which was equally well thought-out. A singer, dressed in white and silver, who moved around a lot and could be seen by those with peripheral or fading vision. Lots of Abba songs, and much audience participation.
The holiday wasn’t what we expected, but it was a totally new experience, and we felt privileged to be part of it. I felt as though I had made a lot of friends, and if I went back again I would be remembered and greeted with enthusiasm.
Some years ago I wrote a blind character in a book. But I now realise that although I think I made a good stab at it, there were so many things I didn’t consider. 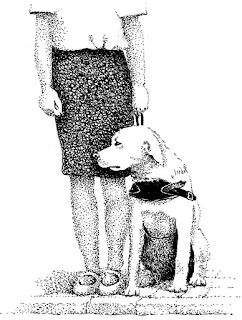 “The pile-up on the M25?”
“You remember that? Everyone remembers that. Apparently the footage of the fire was spectacular.” She was still looking over my shoulder. Suddenly the penny dropped.
She was blind.
“I was driving,” she said. “Isabel lived in the flat upstairs, you see; we’d become… friends. We were on our way to a festival…”
I felt the hairs on the back of my neck stand up. “You’re Angela?” I said, speaking for the first time. “Angela Curtis?”
The woman turned as white as a sheet, and put out a hand to steady herself. A yellow Labrador suddenly appeared at her side, summoned by some sense unknown to us that’s capable of detecting distress.
“Isabel,” she said. “My God.”
“I…” I wanted to say, you had brown hair the last time I saw you, but it sounded crass, mentioning something visual. I could now see that there were snow-white roots beneath the hennaed bob.
“You didn’t recognise me, did you?” she said. “I’m not surprised. But I’d have known your voice anywhere.” A hint of anger was creeping into hers. “Where have you been? What have you been doing? Why didn’t you come and see me?”
“Can we talk about all this inside?” said Tony.
“Is this your bloke then, Isabel?” There was real bitterness in her voice now.
“No,” I said. “He found me in a bus shelter.”
“It’s true,” said Tony. “She’d lost her memory. She was only wearing a raincoat and one shoe. I thought she was a hooker.”
“Really.” The sarcasm was almost palpable. But she stepped back from the door, and ushered us inside. We followed her down the hall and into her sitting room. I felt like Alice going through the looking glass, only I was stepping back into my past rather than another world. Little had changed from the last time I’d seen it, eleven years previously.
“Okay,” said Angela. “You talk, and I’ll listen.”
So I did.
Tony appalled me at one point by taking a couple of photographs – he’d finally twigged  that Angela couldn’t see the flash. I didn’t let on. I still didn’t know how to talk about something visual to someone who was blind.

I’m not sure how well I did that. The dog would have gone to the front door with her, not appeared later on. As writers, we’re meant to be able to imagine what it would be like to be deaf/lose the use of our legs/become disfigured. And researching things like that can be intrusive, tactless, and distressing, however laudable our motives. The one thing I learned over the New Year that really shocked me was how often blind people are robbed. They put a purse down when they’re paying for something, and they can’t see someone else pick it up and walk off with it. It’s hard not to simply be overwhelming glad whatever it was that took away a person’s sight didn’t happen to us.

clarabenet90@gmail.com said…
This comment has been removed by a blog administrator.
17 February 2020 at 12:57