They're only words by Bill Kirton 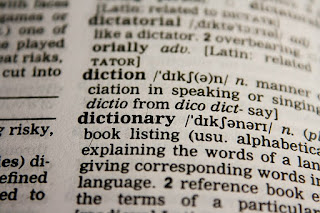 I’ve always been – shall we say, sensitive? – to jargon. So when I read the following paragraph in an old copy of the Guardian, I thought a good cop-out blog for the jolly (despite the state of the world) post-Christmas season would be to share some of the remarks and writings that I’ve copied down in a book I’ve kept for many years. The Guardian’s piece was from an organisation called the Local Better Regulation Office, and it read:

‘We are hosting a master class to take local authorities through the process of developing outcomes and impacts dashboards against their developed pathways. The session will focus on local authorities who have gone through the process of developing their logic model, and now require additional expertise on how to develop indicators to measure achievements against outcomes.’

‘Outcomes and impacts dashboards’, eh? There’s an organisation that knows the power of language. We all love words, the things they can do, the magic they can unlock or create, and when they’re mangled, strangled and kicked to death by committees, evasive politicians and people who should know better, it hurts and infuriates us. On the other hand, the way they sometimes transcend the atrocities inflicted on them to suggest dimensions unsuspected by the speaker is delightful.
It would be too easy to take examples from the ghastly Trump or Johnson (or many of their predecessors, for that matter, although none were quite so far divorced from the norm). The ones I'm referring to were all eminent(?) public speakers who, rather than having a command of language, were in constant conflict with it.

Equally easy targets would be those ‘Instructions for use’ translated from another language, such as the one for a toy car, which warned:


‘on occasion by using it as pushcart for the toddling baby about 12 months since born, the leg comes into contact with the car’s speed and accordingly the baby may be overturned’

or the cleaning fluid for glasses which suggested users should:


‘apply less than one drop to both sides of the lens’.

But I prefer examples from people trying hard to make the words work for them. Like the engineering union official interviewed on the BBC who said:


‘our members’ mood is one of very seriousness’.

And these gems from a British football manager famous for his loquacity. Of his team’s disappointing position in the league, he said:


‘we cannot expunge the last 20 games. What we can say is as a result of the last 30 games, whatever the variables, excuses or praises one wishes to implicate, our position is as it is.’

He also said of another team which just managed to avoid relegation and which we’ll call Acme United:


‘Only a very, very few people were aware of the demeanour of Acme in 1986. Reminiscent of the eerie old haunted house that had been empty for years and was begging for life. No different to the dodo. How joyful for them not to have acrimoniated in the non-league. How delightful for them to be making a success of defeating extinction. Let us hope we are all able to be pulmonic!’

Another football manager – again British – whose team was winning 2-0 but ended up losing the match 3-2, remarked:


‘As I see it, if you’re going to commit suicide, you don’t do it yourself.’

In fact, British sportspeople seem to have a gift for speaking English as if it’s a foreign language. One boxer claimed that;


‘the British press hate a winner who is British. They don’t like any British man to have balls as big as a cow’s like I have.’

A Formula One driver said wisely that:


the proof of the pudding is in the clock’.

One reputedly intelligent footballer’s contribution to the sum of human knowledge was;


‘Football’s football; if that weren’t the case it wouldn’t be the game it is.’

And yet another football manager, coaching a team in , who wanted to stay there because of his garden, told his interviewer:

It goes on and on and on – but in each case, it’s words that provide the delights, even in my final example, perhaps the silliest of all. The first names of a succession of managers of one English team in the were:

Or maybe it just shows how sad I am that I have a book full of stuff like that which I’ve bothered to copy.

Jan Needle said…
Give us more, Bill, give us more! I once bought a suede jacket (my very first, super super cool) which contained a label with cleaning hints. It said, "After washing, you may experience shedding." That was enough for me. I never washed again.
7 February 2020 at 10:35

Sandra Horn said…
Great fun, Bill! Shades of Hoffnung. I have a favourite use of English which is not wrong at all, but inventive: Unless I hear from you by the 8th inst, I shall take such steps as will cause you the utmost damned amazement.
Is it too good to be true, though? I suspect it might be.
Thank you!

clarabenet90@gmail.com said…
what does it take to be a successful author ? I would say that initial reviews and marketing definitely boost your book. I used https://usabookreviewers.com/christmas-gift to get a few reviews and also promote my book. Hopping to be in the top 100 genre lists and see better sales this Christmas season…
8 February 2020 at 08:36

Sandra Horn said…
Nothing could top your football managers list, Bill! Not even our resident pest who is 'Hopping to be in the top 100 genre lists'
8 February 2020 at 10:41

julia jones said…
Brilliant -- you could obviously compile the next edition of Colemanballs with one foot tied behind your back
9 February 2020 at 12:31

You're a logophile like me, so naturally, you would find humour in the mis-use of words.

Friends used to call me the grammar nazi for correcting them when they misspoke. They obviously didn't know people like you were recording their errors!