Squirrels in the Attic (Cecilia Peartree)

By Cecilia Peartree - February 05, 2020
In case anyone is wondering, the title of this post doesn't refer in any way to my mental state or that of anyone with different opinions from me about politics or anything else. The post will literally be about squirrels in the attic, with a few words on the effect of this kind of thing on my writing process. It's mostly a cautionary tale for anyone else who has been 'enjoying' the antics of squirrels around their garden in what has been a very mild winter for us.

We've been noticing the squirrels in our garden for some time now, and Jacques the cat has made various pointless attempts to catch one. Lithe and athletic though he is, he is quite a bit heavier than a squirrel and can neither use the spindly lower branches of our conifer nor the walls of the house to get around, although it's not for want of trying in either case. The squirrels have become so confident that they can stare through the conservatory windows and run across the roof without fear of reprisals. 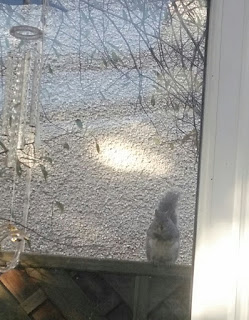 Recently there have been more of them, and they have been even more playful. One of our 'new' cats, Daisy, had a spell of getting very agitated when she saw them running above her head, and I was almost tempted to give in and let her out to chase them. In the light of what happened next, I am only sorry I didn't.

It was on one of many dim, dark days in January that I was having my breakfast when all the lights went off. At first I thought perhaps the portable heater I use in the conservatory was faulty, as portable heaters often are, but even after I had unplugged it, we still couldn't get any of the electricity to come back on. I panicked and called the only electrician I knew of, who had responded to a panicky phone call from me previously. He said he would come round some time that day, so I waited in for him. And waited. And waited. Later I got a grumpy message from him to ask why I had gone out when I was meant to be waiting in. As I had been waiting at the front of the house for hours in case I missed the door bell, I can only assume he did as all too many delivery drivers have done recently, and tapped the letter-box very quietly, then tiptoed away before anyone could hear him.

Later my son managed to re-set some of the electrical circuits and we soldiered on over the weekend without the upstairs lights, which after some experimentation we decided were where the fault lay. Incidentally it was only then that we realised that having acquired a dark grey cat might have been a mistake when we had a dark coloured carpet on the stairs.

On Monday another electrician arrived, told me the blackout had been caused by a faulty light-bulb and left again. About two hours later all the electricity went off again. On Tuesday we finally got hold of a real electrician in a boiler-suit and woolly hat. He listened to my story, brought in his ladder and clambered up to the attic. The news from there was not great, but at least he had found the source of the problem. Squirrels - probably the same ones who had been annoying the cats for a while - had chewed through the electricity cables. One of them had apparently not survived the experience but I can't in all honesty say I'm sorry about that. The man in the boiler-suit replaced a length of cable and everything was back to normal again. They had been chewing on the timbers up there too and according to the internet this can actually cause structural damage to the house eventually. I'm trying not to think about that, but we do need to block up the hole where they were getting in. 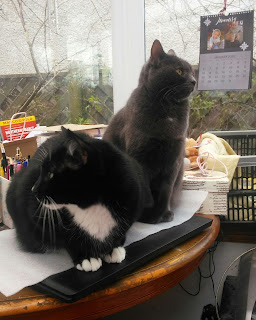 At last, as promised, a few words on the effect of all this on my writing. I am not the kind of writer who needs peace and quiet to write. I can even write with someone else in the room. I've written in cafes, in the corner of the reception area at a garage, on a train and in various hotel rooms. However, I've found it's impossible to focus on writing while there is a domestic emergency going on, whether it's some sort of crisis with gas or electricity, as described above, or a family thing such as childbirth or school phobia or physical illness. So, in spite of having almost finished the 3rd in a series of historical novels when all this started, I was unable to do anything to my draft for the best part of a week.

Sheer fury, on the other hand, I find is quite a useful aid to creativity!

Susan Price said…
You make me feel lucky, Cecilia! We had scamperings and crashing in the attic and our pest-controller originally thought it was squirrels because of the time of year. But, worse, it was rats! Or are rats worse? I'm not sure.

All evicted now, and secured against them. And at least they left the electrics alone!
5 February 2020 at 11:20

Cecilia Peartree said…
Yes, squirrels are definitely fluffier and seem less horrid than rats, even if they do cause greater chaos!
5 February 2020 at 13:18

clarabenet90@gmail.com said…
Beta-readers are indeed extremely important in your process. They will catch mistakes even you or a proofreader didn’t catch, and give amazing tips on how to develop further your story. I used https://honestbookreview.com to get a few reviews and also promote my book. Hopping to be in the top 100 genre lists and see better sales this Christmas season…
5 February 2020 at 15:25

Umberto Tosi said…
Most amusing when it's not my cables being chewed. We enjoy squirrel antics in the mulberry and other trees in our back patio. Fortunately, our condo building has no attic for them to invade. I recommend two literary gems on the subject. Elizabeth McKenzie's best-selling, "The Portable Veblen," a love story featuring a talking squirrel [https://amzn.to/2UoeuxA ] and John Blade's darker "Small Game" from the POV of a suburban nihilist hunting them with long rifle. https://amzn.to/2GZrXUE
5 February 2020 at 20:58