Books for children? Books for all! - by Alex Marchant

As a writer of books for children, you might expect me also to be a regular reader of them. But how many other adults are? And what types of children’s books do adults tend to read?


I remember a beta reader of my first completed (as yet unpublished) novel ‘Time out of Time’ saying she thought lots of adults might enjoy it as a ‘cross-over’ book, owing to the copious references to my 1970s’ childhood. It was the first time I’d really thought about whether my books could be classed as ‘cross-over’. A quick Google search suggests the term might more readily be applied to books enjoyed by both adults and teenagers, rather than children (e.g. https://www.theguardian.com/books/booksblog/2007/sep/19/thegrandtraditionofcrossov), drawing on ‘coming-of-age’ themes instead of aiming squarely at pre-teens as my books do.
But ultimately, after publishing my first two books, The Order of the White Boar and The King’s Man, conversations with buyers and readers (both face to face and on social media), and also various reviews, set me thinking about who might be reading them. 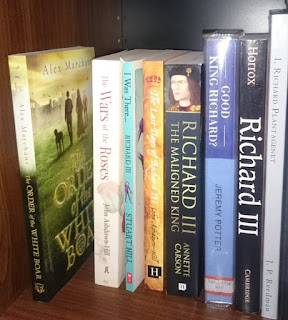 One reviewer on Amazon, Anna, said she doesn't usually read children's novels, but she loved The Order ofthe White Boar. Another, Cecily Anne, said it was 'one of the best works of children's historical fiction' she had ever read and that she would keep it for when her own children were ready. A third, JA Stafford, said she had bought it as a gift for her niece and nephew but had to read it first herself. And a fellow children’s author, Liz Flanagan, who I happened to meet at a local school fayre, bought the book for her nephew, but later sent me a review she wrote after reading it herself. (I can only assume both JA and Liz are less inclined to damage books’ spines when reading than I am, if they were still able to subsequently gift-wrap and offer them as presents…)

Overall, this seems to be a theme with readers of my books – adults, perhaps already with an interest in King Richard III and medieval history (although not always), buying the books for their children, grandchildren, nieces, nephews, children of friends, but first reading them themselves. Several of my beta readers were adults with no particular interest in the subject who nevertheless enjoyed the books – so this hasn't come as a complete surprise to me.
But should it have?
There has in the past been a certain amount of 'snobbishness' about children's books in the adult literary world, and it has been demonstrated in the tiny amount of space traditionally dedicated to reviews of children's literature in newspapers and magazines; I seem to remember even the Guardian and Times Literary Supplement being called out on it in the past couple of years.
Frances Hardinge's The Lie Tree was a very rare case of a children's/young adult book winning a major non-children's book prize when it was awarded the Costa Book of the Year in 2015, following Philip Pullman's success with The Amber Spyglass back in 2001 (which won the Whitbread prize and was also shortlisted for the Booker). Between these two came the enormous peak of success for J.K. Rowling's Harry Potter series, with accompanying films from 2001 onwards. Soon to join Pullman and J.K. in enjoying the Hollywood treatment is Patrick Ness's The Knife of Never Letting Go (following the triumph of the film of A Monster Calls, a book he co-wrote with Siobhan O'Dowd). In the past few months, in addition, both Pullman (again) (His Dark Materials) and Malorie Blackman (Noughts + Crosses) have had children’s/young adult works transformed into major dramas for the BBC – both airing during the peak evening slots at 8 or 9 p.m.

All these books – and many others released in recent years – are masterful treatments of very important and often dark themes and ideas; they write of triumph and tragedy, life and death, extreme violence, loyal friendships, war, illness, religion, ethics, injustice. Sometimes a little romance too. All subjects for people of all ages.
Yet why did Bloomsbury feel the need to release the Harry Potter books in 'adult-friendly' covers? Did some adults really feel embarrassed at being seen reading a 'children's book'? 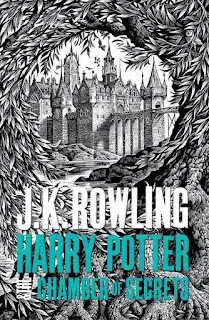 I like to think that this is no longer the case (if indeed it was back in the early 2000s). Personally I've never stopped reading children's books throughout my adult life. Susan Cooper, David Almond, Malorie Blackman, Alan Garner and Rosemary Sutcliff have always rubbed shoulders with Austen, Tolstoy, Mantel, Rushdie and Atwood (to mention just a few on my bedside table at the moment). Is this because I write for children? I don't think so. Maybe, conversely, I write for children because I have always read such books – and understand their value. 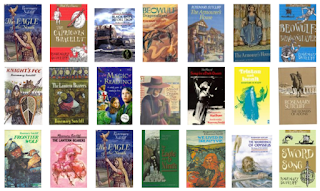 I'll leave it to others to discuss and debate the true value of books for children and young adults – there must be plenty of PhD students and lecturers in universities researching into the subject, gaining far greater insight and knowledge than I ever will.
Or are there?
What do you think about adults reading children's books? Do let me know!

(My thanks to Yuko, Alex, the BBC, Bloomsbury and RosemarySutcliff.com/Library Thing for the images.)


Alex Marchant is author of two books telling the story of the real King Richard III for children aged 10+, The Order of the White Boar and The King’s Man, and editor of Grant Me the Carving of My Name and Right Trusty and Well Beloved…, two anthologies of short fiction inspired by the king, sold in support of Scoliosis Association UK (SAUK).

I'm completely neutral about adults reading children's books, Alex. I read many of my parents' books as a child -- things like David Attenborough's 'Zoo Quest' books -- and read many 'children's books' for the first time as an adult -- 'Alice in Wonderland', for instance.

As children, we shared our comics with our father, who was an enthusiastic fan of the Bash Street Kids and Faceache -- he would then take the comics to work for his workmates to read during their breaks. (His workmates overhauled and repaired electrical motors: a quite highly skilled job.)

And when I was reading picture books to much younger relatives, I was knocked out by the sheer poetry of Sendak's work, among others. So I find the idea that there's a sharp divide between books for children and books for adults a strange one.

Maybe others will correct me but I feel that someone who needs to disguise what they're reading (providing it's not 'Serial Killer's Weekly') must have a lot of anxiety about the image they're presenting to the world. If someone thinks I'm childish because I'm reading a book of fairy tales then they're making a snap judgement they may live to regret; and I can live with that.

I'm enjoying Noughts + Crosses on TV, though must admit I never got around to reading the book.

When I was younger, children's books were exactly that - i.e. for young readers. Books for readers older than about 10 were in the adult section of the library, and I had to borrow my mum's card to take them out. But now we have 'teen' and 'YA' fiction, much of which used to be in the science fiction/fantasy section... that's where I always headed first as a teenager! I read HG Wells at 11... would that be counted as YA now?

There was lots of 'crossover' back when I was a 'older child' - the Library certainly put the 'teen' books in 'adults' to a great extent. So at that kind of age I was reading both what was written for children and what was written for adults - Arthur Ransome and Pamela Brown (children's) and a whole swathe of 'adult' works (back then, writers like John Buchan come to mind, also the Brontes) - also we were reading Dickens at school, and then there was reading more' adult' stuff standing at the stacks in the Library, lest by taking the book home your mum would say it was too grown-up. I read a book by a woman called Penelope something, about a d frustrated, lonely housewife - wish I could remember the title - something to do with pomegranets? It linked up a few years later with the WOmen's Liberation books such a the Female Eunuch but at the time it amazed me... and that was not 'the sex' (was there any?) but the whole thought of women's adult lives at home...