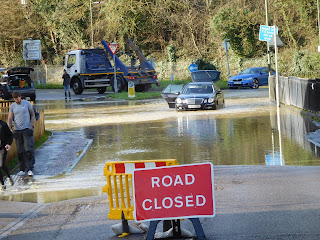 The recent floods in Leatherhead, where I live, brought home to me how much the vagaries of the natural world affect our lives. And because they’re dramatic events, we tend to use them in fiction, both for adults and children. Growing up in England in the nineteen-fifties it was hard to imagine anything momentous ever happening to me, and it led to a real thirst for adventure.

My first opportunity came when I was eighteen, in between school and art college. I came into a small amount of money, and signed up for an overland trip to Morocco, which was not a common tourist destination in those days. It was an eventful trip. There were twenty-one of us, and we drove through France and Spain in two long wheelbase Land Rovers, camping on the way. It wasn’t a trip that health and safety would have sanctioned, and two events in particular could have had very different outcomes. The first was when we were travelling in the Atlas Mountains, and looking for a sheltered place to camp. Our tour leader announced that this dried-up river bed was just the thing, so we drove down into it and set up the tents. I could hear my geography teacher’s words all too clearly, but I was eighteen far too self-conscious to question my elders. “People who are foolish enough to camp in wadis,” the teacher had intoned, “can get swept away in the middle of the night when the river floods.”  A fire was lit, dinner was prepared, sleeping bags unrolled and we all sat down to eat admiring the spectacular scenery of the snow-capped Atlas Mountains. They were made all the more spectacular with a display of lightning and the sonorous roll of thunder in the distance. No rain, though, It was all too far away. I did not put two and two together.
“Oh,” said someone, some time later, “I think one of the water cans has sprung a leak.” But within seconds it became clear that there was far too much water to come from one water can, and it was warm. It didn’t arrive in a turbulent rush, but it rose calmly and steadily and we had to throw everything onto the roofs of the Land Rovers and make our escape. We camped on the river bank in the open air, and the next morning our erstwhile campsite was under twelve foot of water. A few days later one of the Land Rovers got stuck in a gorge. The river started rising, and it was only thanks to the help of some local road builders who winched it out that our trip didn’t end there and then. So did these episodes cure my taste for adventure? Just the opposite. I couldn’t wait to head off again. 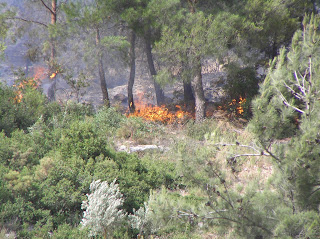 Since then I have been stuck in another river in a taxi in Costa Rica, got cut off on a winding mountain road by mud slides, seen the very rare phenomenon of cloud iridescence which some thought heralded the end of the world, experienced a dust storm in Mongolia, and encountered floods in Slovenia when there was a flash thaw and there should have been snow. I have seen forest fires in Turkey, and watched helicopters scooping up water from a lake and dropping it on the blaze.

However, the flooded wadi remains the most powerful memory, perhaps because it was the first time anything really exciting ever happened to me.   I used it in Back to the Divide.

It was Felix who woke first. It took a moment or two to register what was happening, as he was still half-asleep and he was vaguely aware of a warm dampness. His first thought was that he’d had an embarrassing accident, which was something he hadn’t done since he’d been cured of his illness. Then he realised that there was far too much water for that; it had reached blood-temperature because it had picked up heat on its long journey from the mountains. The wadi was flooding, and the river was getting deeper with a frightening rapidity.
Thornbeak woke up, and squawked with alarm. Then everything seemed to happen very quickly. It wasn’t a sudden wall of water, like a tidal wave, but it was much faster than a tide coming in, and it was carrying twigs and branches that knocked against him as he stood up.
“What is it?” gasped Betony, now also on her feet.
“The river!” yelled Felix. “We’ve got to get out!”

The side of the wadi was quite steep. By the time they reached it the water was up to their waists and it was getting hard to make any progress, especially with the rucksacks on their backs. Thornbeak seemed to be in trouble; her feathers had been soaked from beneath. Rain always ran off her with no trouble at all, but this was different. She flapped her wings and screeched for Ironclaw, but he was having the same problem himself. The deeper the water got, the faster it seemed to flow. Felix got a toehold on the bank, climbed up a little way, and stretched his hand down to Betony. Hauling her out was harder work than he’d have thought possible – every muscle seemed stretched to breaking point, and both their hands were slick with mud. He could see her face in the moonlight, twisted with effort, and for a while there was just pain and panting and slipperiness. Then she was out, and the two of them scrambled up the bank on their hands and knees and out of danger.

I’ve had a few exciting things happen to me since, when I’ve been on my travels, but not what you’d call natural disasters. Encounters with living things, really – scorpions, snakes and bandits. I still need to find a situation in which to use the little yellow scorpions that were everywhere in the campsite in Morocco, but were too small and inoffensive to seem dangerous. Hm. Ignorance is bliss until it stings you… (It didn’t, thank goodness.)

Your post is compelling and so apropos of this seemingly apocalyptic moment - reminding us of our inner coping resources. This too will pass!

Nooo! This happened to me and my husband! Except he was my boyfriend then.
During university holidays we went on an Amtrak trip round the USA. (I know, you're meant to do it by Greyhound but I can't read on buses and some of the stretches were going to be very long.) We loved the trains but there was a problem: most of the spectacular places we wanted to visit had no railway station near them. So hitchhiking from the nearest station became necessary, which is how we found ourselves being driven round the Painted Desert by some friendly people who dropped us near the exit just as it closed.
Now there were signs everywhere saying you can't camp in the Painted Desert but we had nowhere to go and there was this nice, sheltering bridge over a dried-up riverbed and it wasn't raining. What could possibly go wrong? Er... it rained in the mountains. Around 11 pm our sleeping bags - us in them - were hit by 4 feet of warm muddy water. We managed to save ourselves and much of our sodden belongings and drag them to the nearest light, the souvenir shop at the gate. Next thing we knew, a ranger appeared with a torch and accused us of trying to break into the shop without our trousers on....
We were such idiots. And we were so lucky.
Great post and comforting to know we weren't the only duffers!