Moving on by Sandra Horn

This month has seen the usual joyful preparations for World Book Day. I’m long out of it all now, but still in touch, in various ways, of the doings of younger colleagues – delightful photos and stories of happy and less happy school visits. I thought I might feel a pang or two, but no. Anticipation of a day in a school was always part-happy, part-angsty. I’ve had every kind of welcome from staff, from the top end of kind and courteous to offhand and downright rude on one or two occasions – and I see from other children’s writers that it is not uncommon. I’ve sat ignored in staff rooms and on one unforgettable occasion was accosted furiously with this:

Her: ‘My sister writes stories.’
Me: ‘That’s great!’
Her: ‘Hers are VERY good’ (not-quite hidden message: not like the rubbish you write.)
Me: ‘Have they been published?’
Her: (with raging contempt for me) ‘No.’

I remember thinking,  once or twice, ‘Good grief! These oafish people are teaching our children!’

On the other hand, and by far the most often, 'Oh great! These teachers are such wonderful people!’ 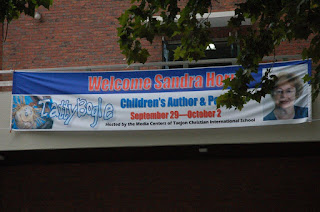 There’s something about being with small children, too, that lifts the spirit – their fresh take on the world, their unselfconsciousness, their wide-eyed enjoyment. 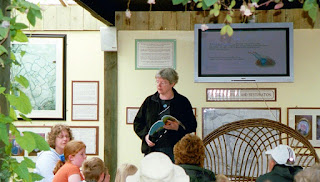 It has been by and large, a joy and a privilege to have had those years of being a children’s author and everything that came with it; some wonderful editors, among which Fiona Kenshole and Isabel Boissier shine out like stars. Some brilliant illustrators, whose skills left me breathless with admiration. No pangs now it’s all behind me? Well, there are still a couple of stories I couldn’t place with publishers, but hey! That’s how it goes, as we all know only too well.

Time to move on.

That’s something of a given in life, the ‘time to move on’ thing. If you are lucky enough to be able make that choice rather than having it made for you by circumstance and/or other people, it can be the start of an adventure. I’ve been able to choose the jobs I did, and to move on when I wanted or needed to; to take early retirement when the bureaucrats moved in and the increase in paperwork threatened to overwhelm everything else. Then setting up the Clucket Press with Niall my husband eased the transition from demanding full-time job to retirement and was the most amazing fun. Our first two books, The Mud Maid and The Giant, are still selling at the Lost Gardens of Heligan, fifteen years on. Tattybogle and Babushka still sell, albeit at a trickle now. We have the last few of each and when they’re gone, we won’t be asking Andersen and Barefoot Books for any more. Our other DIY books have been less successful and they feel now more like a vanity project. Blushworthy. Thank goodness for PoD so we haven’t broken the bank having vast quantities printed!

Accepting that the Clucket Press’s children’s books had come to an end was painfully hard at the time, but we still have a few ISBN numbers… and I have been taking online poetry writing courses with the admirable Live Canon – of which, more in my next blog.

This time of enforced staying at home because of Covid19 has its compensations – lots of time for study. I’m putting a first collection of poems together and I can’t quite believe I just wrote that. Yes, I am. It’s time, at my advanced age, to learn the tools of my trade rather than getting by on seat-of-the-pants as I have before. There will be just a few copies for friends and family (although I seem to be surrounded by people who don’t like or don’t ‘get’ poetry!).

Umberto Tosi said…
Thanks for bringing back some sweet, some delightful and a few annoying memories of being a volunteer teachers' aide at my daughter grammar school, managing a room full of first graders always brought surprises and lifted my spirits, as such experiences have done yours.
20 March 2020 at 09:21

Bill Kirton said…
Me too, Sandra, and alongside the 'part-happy, part-angsty' bit there seemed, invariably, to be the feeling of satisfaction afterwards and the sense that it was worthwhile. Unlike with adults, with kids you know where you are.
20 March 2020 at 10:29

Susan Price said…
Phew! With the title, 'Moving On,' I thought you were leaving us, Sandra! Thank goodness you're not.
Good luck with the poetry collection. I've enjoyed the poems you've shared with us very much.
Oh -- and those downright rude teachers (and others) who are seething with fury and jealousy because you're published and they're not? I've met some too. It always makes me hope that, when I'm seething with jealousy, I hide it better.
20 March 2020 at 11:16