Many of my novels are set in a completely fictitious small town. I realised it would be sensible for it to be fictitious soon after I started writing the first in what is now a long-running mystery series. To begin with I was planning to use South Queensferry as the setting, but I'm very glad I changed my mind. 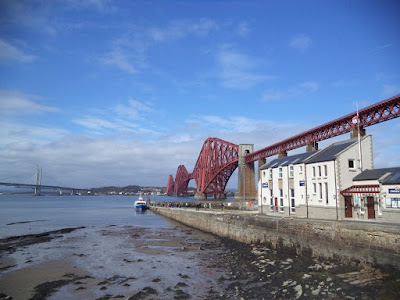 Although its location is interesting, with the original Forth Bridge looming over it and the two newer road bridges at the other side of the town, I don't know it in enough detail to be able to write about it confidently, and then there is always the problem with a real small town that you might inadvertently use a real person's name or invent a restaurant or shop that's in the same position as a real one, or has a very similar name.

This was brought home to me forcefully only a day or two ago as I worked on the 20th in the series. For this one - and I don't think this is much of a spoiler - I had to invent a wedding venue that had to be situated miles from anywhere, for reasons I can't divulge at the moment. This wasn't really a problem in itself, because I've planted  my fictitious small town somewhere between two real ones along a stretch of the coast of Fife which is a bit like the land that time forgot (apologies to anyone reading this who lives in or near the area) in the sense that the main train line passes it by and even the main road runs along inland behind the small towns and you have to turn off on to minor roads to access them. Incidentally, one of the real towns is Culross, which is almost unbelievably picturesque and has been used on occasion as a film set for the 'Outlander' series. 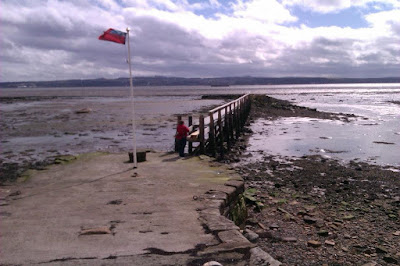 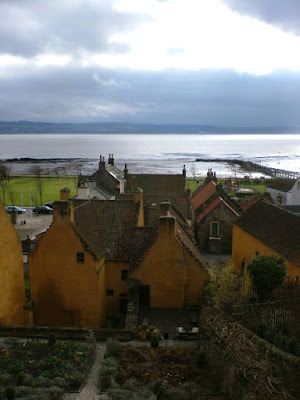 Although it was tempting to set my mystery series there, I resisted for the same reasons I abandoned South Queensferry, although Culross is mentioned sometimes and one of the characters fleetingly visits it in the 19th of the series. I've also borrowed one or two of its geographical features such as the 'island that isn't an island'.

Usually this idea of using a fictitious town in a real location, so to speak, works quite well. But I think I have just run out of luck. I had made up my mind to place my imagined wedding venue on a promontory that I thought would fit neatly into a gap on the coast between Crombie Point and a tiny place called Charlestown. I started to write with this in mind and invented an interesting venue run by a slightly mysterious couple and surrounded by wilderness. As far as I could recall from looking at maps of the area  previously, there was absolutely nothing along that stretch of coast, except for some kind of defence installation which I had vaguely thought I might be able to make use of in the plot, since one of the series characters is a retired spy. Nearly halfway through the novel, I suddenly had reason to check possible bus routes, and as usual the checking overflowed into more general research into other possible situations I could use the location for, and after following a few links I found myself looking at a website advertising a new wedding venue - a real one! - almost right on the shore at Crombie Point.

I've tried to add a link to Google Maps here but can only manage a screenshot so here it is. Crombie Point is at the edge of the part of the coast that bulges out south of Cairneyhill.

In some ways I felt quite pleased with myself for having picked such an appropriate spot for a wedding venue - the building even looked a lot like the one of my imagination, for goodness' sake - but of course I can't use it now. Instead I hope to move the event to the conveniently-placed Devilla Forest, which doesn't have the open views over the River Forth of the original location, being some distance inland, but it is rather out of the way and there is lots of undergrowth, which is important in this case.

I wonder if writers who set their novels in large cities have this kind of problem too. Or maybe they don’t feel they have to worry about people taking exception to their pubs, restaurants or places of work being used as murder scenes. Maybe there’s a kind of safety in numbers, in the sense that if you use a real person’s name or the name or location of their business in a novel set in a large city, it’s quite likely there are lots of people with that name and lots of pubs called The Red Lion, for instance, and it’s harder for them to claim the character or the location in the novel has anything to do with them. Or maybe in the case of well-known writers people don’t mind being mentioned in one of their books.

Griselda Heppel said…
I’d never thought of this. I imagined that provided the place is fictitious you can do anything you want but I do see that if the setting is recognisable - and as you say, unique - you could be accused of maligning it in some way. I sometimes suspect that the boom in fantasy fiction is fuelled by writers wanting to avoid this kind of thing. V interesting post!
6 March 2020 at 17:19

Umberto Tosi said…
Love your descriptions. Your town sounds like the perfect setting for your mystery series.... I've faced similary authenticity challenges setting my stories main in big cities. I'm slightly envious of those writers able to spin village and small town tales, for they have a certain magic that can't be found in an urban setting... Good luck with the series!
6 March 2020 at 21:57