When it’s going well, there’s a certain alchemy to writing. I’ll explain with reference to the last (so far) of my novels, The Likeness. It’s embarrassing to admit that, when it was a WIP (Work In Progress), the IP bit went on for ages. In the good old days, it used to take me about 6 months to write the first draft of a novel, but The Likeness crawled on (and off) for at least 2 years. It eventually made it over the 70,000 word mark but I had no idea why it had been so much like hard work. 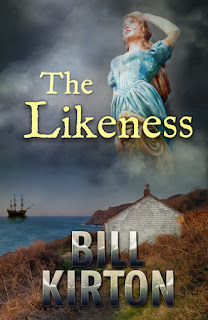 It’s a sequel to The Figurehead, which is a historical crime novel that, in the course of writing, also became a romance, and part of the reason why I’d been dragging my heels was that I wasn’t sure how I intended to resolve the problems of the relationship between a figurehead carver, John Grant, and Helen Anderson, the daughter of a rich merchant. The novel’s set in 1841, when attitudes to marriage and extra-marital goings-on didn’t leave much scope for … well, anything really.

But then something – a bit of alchemy – came out of the blue. As well as the romantic relationship and the obligatory crime/mystery, the story’s structure relied on two separate threads: the arrival in Aberdeen of a theatre group to perform melodramas at the Theatre Royal; and the determination of Helen, an only child, to become involved in the family business. And, without me planning, or at first even noticing it, they both began to reach a crucial stage at about the same time. For me, it was an interesting – and pleasant – discovery. But I soon realised that it was more than just a coincidence and I started looking at them in a different way, not as the writer but as a sort of analyst of how the various elements were working, what their ‘significance’ was. In a way, I started thinking like a potential critic or reviewer. I don’t mean that I did it consciously; it’s just now, writing this, that I realise that’s the best way to sum up the experience. I wasn’t looking at the situation and wondering where to take each thread next; instead I was aware of what turned out to be pretty obvious parallels between them. On their own, which is how it seemed, these two separate elements had started feeding off one another and were moving closer together.

It’s not magical. The two threads were part of my imaginings. They belonged in the same mental space, and were, I suppose, bound to inform and affect one another, but that’s at a subconscious level. The effect it had when I started considering them at the conscious level was to help me to understand them better and see how I could exploit the parallels. It was one of those ‘being in the zone’ experiences which now and then make writing such a privilege.

There’s a secondary motive, however, for choosing this subject for a blog. As I mentioned in a previous blog, apart from introducing me to woodcarving, which I took up as part of my research and still enjoy, The Figurehead  allowed me to indulge in a dream I’d always had – to sail in a square-rigger. For just a few days I was a paying member of the crew of the Christian Radich on a voyage from Oslo to Leith. She’s the ship which featured in the old BBC series, The Onedin Line. If you don’t remember, or don’t know the series, you’ll see just how beautiful she is if you watch the opening of this Youtube clip:

Anyway, as well as the self-indulgence of taking turns at the wheel of such a vessel, it gave me the material for a long short story, Death Ship. It occurs to me that the driving force behind the story springs from the same impulse that drove my novel, The Darkness, revenge. 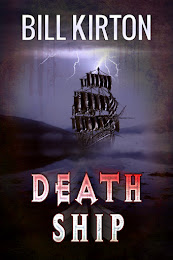 I tried to make it permanently free on Amazon but apparently that can’t be done. So, if you’d like to know what it was like on the North Sea in a fresh South-Easter (with added murders), it’ll either cost you 99p. for a Kindle copy or you can email me and I’ll send you the typescript for nothing.

That's very interesting about the creative process Bill, the two threads coming together your mind as you describe it here. Reading this piece reminded me of many school trips to The Cutty Sark and my love of Joseph Conrad's sea stories. Thanks too for the Onedin Line Film clip. Your story, The Death Ship sounds interesting. I don't have kindle but I'd be interested to see the story. What's the email for you? All best, Peter
7 April 2021 at 11:33

I'm late, what else is new, right?

Did you write a new book and didn't even tell me about it? :D

Reb MacRath said…
I had no idea of the time and effort that went into The Likeness, Bill. But i' a testament to the power of both books that I look forward a new book in the historical vein than another of the mysteries I kept pestering you to write.
13 April 2021 at 15:51

Bill Kirton said…
Thanks for the kind words, Reb. It took some nagging to get me to start on The Likeness and I'd be interested in reading a sequel. Indeed a friend has already suggested it should feature the same happy couple, but be situated in Marseille. Tempting, but going there for research would see me succumbing to the unfailingly tempting French way of life so someone else would have to write it.
13 April 2021 at 17:23