Imagine living under an all-powerful leader who has gone insane. One act of madness follows another, until even his closest advisers and friends begin to realise he is not who they thought he was when he ascended to power. No, I'm not talking about a 21st century leader - however tempting the comparison! I am talking about Rome in the 1st century, when we were merely a barbaric outpost known as Britannia, and the Emperor Caligula was in charge.

Caligula was a nickname, given to the emperor when he was a small boy and accompanied his father on campaign wearing miniature war sandals. It means 'Little Boots', which sounds rather sweet to me, and maybe he was sweet at that age. But, after he ascended the throne in AD 37, something changed. Acts of madness and cruelty abounded, until Caligula's reign as emperor ended with his assassination in AD 41 and his uncle Claudius took over. It was a turbulent period in Rome, giving rise to many rumours, including one that Caligula made his favourite racehorse, Incitatus the Swift, a Senator and Consul of Rome.

Being slightly horse-crazy myself, I can understand why the emperor might want to honour his favourite stallion in this way. Sometimes, horses seem to have more sense than people, and Incitatus certainly could not voice any opinions that conflicted with Caligula's, as the human senators must have done in increasing numbers as the emperor's sanity disintegrated. By this time, Caligula was having fits that caused him to froth at the mouth - possibly untreated epilepsy? Taking his beloved Incitatus into Senate meetings seems a small act of madness compared to some of the other atrocities committed by the mad emperor.
Incitatus was used to luxury. He lived in a palatial stable, ate gold for breakfast, wore jewelled collars, and had 18 slaves to look after him. He was the perfect choice for my next horse-themed historical novel, following in the hoofprints of Alexander the Great's magnificent black warhorse Bucephalus (I am the Great Horse). However, in keeping with the saying "like owner like horse", Incitatus' journey was in the political arena, rather than on the battlefield. Although the emperor apparently accompanied his men to subdue a rebellion in Britannia in the months before his death, Caligula was no great general leading his legions to war astride his prancing white steed. The pampered Incitatus spent much of his time racing around the Circus Maximus in Rome on his quest for glory, while the emperor cheered him on to victory from the safety of his imperial box.

Whether the horse actually became a Consul in history is debatable, but I like to imagine that he did, and more. Incitatus himself must at least have thought he was equal in status to the emperor, so I have given him a small part in each "scroll" (chapter) to tell his side of the story. On the human side, you'll meet Livia, one of the many slaves assigned to Incitatus - her job is to make him look beautiful and braid Charms of Safe Running into his mane for his races, which gives her the perfect opportunity to steal Incitatus' golden oats to pay for her ailing mother's medicine. You'll also meet Marcus, son of one of Rome's equestrian captains, who dreams of winning a race in the Circus Maximus - when Caligula's champion charioteer is killed in a crash during training, Marcus gets his chance to drive a quadriga pulled by four of the fastest horses in Rome, including the emperor's stallion Incitatus. But with his father involved in a plot to assassinate the emperor and restore the republic to Rome, neither Marcus nor Livia can escape being drawn into the Republicans' plans. Bound together by the emperor's horse, both youngsters must draw on strengths they did not know they possessed to survive Caligula's revenge.
The Horse Who Would Be Emperor mixes rumour with legend in a period of Roman history where facts are scarce, and is suitable for readers aged 10 to adult. 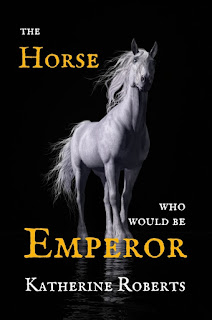 Ruth, it was certainly a fascinating story to research. The history of Caligula's reign is sketchy, and much of what we know about him (and his horse) was written more than 80 years after his death, so there are as many rumours as facts. The horse Incitatus was real enough, though whether he actually became Emperor of Rome is debatable... the joy of fiction is trying to find out!
22 April 2021 at 15:38

misha said…
Just bought the Kindle version and am looking forward to reading it.