Once, years ago, we were at a party which seemed to have more than its fair share of irritating people. I had been working in a special unit for people with what would now be called severe learning disability (assuming I’ve caught up with current thinking). A woman asked me what I did and when I told her, responded with ‘Oh, I couldn’t do that. I’m far too sensitive.’ Major tooth-grinding!  Tight-lipped response from me: ‘In fact, I think one has to have a degree of sensitivity to do this work.’  Then a step away and  a mad avoiding-her shuffle all evening in the overcrowded room. Then there was this man who kept creeping into conversations with ‘I wrote a poem about that.’ – ‘That’ being anything from the price of eggs to existential angst. We laughed, not kindly, about him for years. ‘I wrote a poem about that’ was a silly catch-phrase we often used. Well, it has all caught up with me now. Serves me right (my mother used to say, ‘serves you glad’, which is odd but satisfying, somehow).

Anyway, I find myself biting my lips so I don’t say it out loud, these days. Sadly, dear reader, it’s true. The tree outside the window, the traffic noise, the moon’s influence on the Earth, scoliosis, a memory…you name it, I’ve probably had a go at versifying it. Why? I’m not exactly sure, but it’s something to do with capturing a thing, an event, giving it a form that sometimes seeks to illuminate or memorialise it, make sense of it, or sometimes takes the sting out of it – the thing that sticks in the brain for good or evil and lasts long. There’s no real objective measure of success in the process, only my thought, my feeling. If I’m bold/foolhardy enough to submit it somewhere, its acceptance or rejection doesn’t really change anything. I’ll be elated or plunged into gloom, but the work and its purpose are still there. Editing after feedback my polish and refine, but the essence remains as it was. Does that make any sense? I don’t know.

Here's a thing: I went to a village primary school along with a cohort of other scruffs. In 1952 we were seven or eight years old, born in the closing years of the war. Our clothes were the product of years of make-do-and-mend and we didn’t think anything about it. Brand-conscious? We wouldn’t have known what that meant. 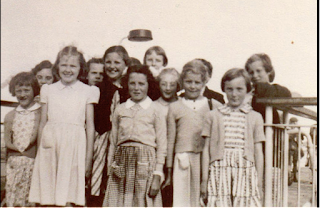 I don’t want this to get all Monty Python, but what has stuck with me over the years, was a nasty incident – an outrage, really,  perpetrated by an insensitive teacher, which produced in us a consciousness that we hadn’t had before. It’s been a bug at the back of my mind ever since. I’ve recently tried to capture it:

We all sat up. Whatever had quiet Marjorie done?

Red-faced and tearful, she clambered onto the chair.

Miss lifted up Marjorie’s skirt to show her petticoat.

There is no shame,’ she declared, ‘in nicely-mended mended clothes.’

What did she mean? We, in our hand-me-downs, our let-out, taken in,

re-knitted, darned, make-do-and-mends, had no idea –

not until then – of the shame we need not feel.

And another ‘bug’ - a much, much nicer one: There is a picture in Helsinki’s Ateneum of  snow-covered branches in a snowy landscape, by Pekka Halonen. I have no artistic skills and cannot conceive of how someone could produce such a compelling image using, essentially, white on white. A puzzle! It buzzed round in my head until I could get some thoughts about it into words:

How to paint a snowscene

Cover your ears against music,

chatter, noises of the town.

Empty your mind of sunsets,

until your blanched skin stings.

Mix china clay dust from the docks at Par

with melt-water from Hofsjökull

Pick up your brush:

Dip into the white clay slip,

And so on. I’ve got over 100 attempts to capture and record the things I can’t let go for one reason or another, for better or for worse. I’m thinking of hiring myself out at parties – a latter-day Ancient Mariner, sidling up and butting into conversations with ‘I wrote a poem about that.’

The photograph is from Memories of Crowborough and Rotherfield, posted by Brian Nye

Susan Price said…
I'm glad you write poems about stuff, Sandra. I especially love the one about painting the snow-scene.
20 July 2021 at 08:38

Ruth Leigh said…
Me too. The world needs more poetry. I absolutely loved your poem, Sandra. Are you going to publish it or enter it into a competition? You should. It's amazing.
20 July 2021 at 09:47

Bill Kirton said…
Lovely, Sandra. I share your experience of thoughtless exposure to a similar 'shame we need not feel' but also, more importantly, to that compelling 'desire to versify'. The difference, though, is that my attempts never reach the gentle, undemonstrative levels of clarity that yours do, and none of them has ever been seen by others' eyes (nor ever will be). Thank you, and please share more of them.
20 July 2021 at 11:06

Jayne said…
What a wonderful piece of writing Sandra! So insightful about the writing process and , Ike a true poet, shing a light on the magic of wors.
20 July 2021 at 20:40

Clare Weiner (Mari Howard) said…
Just caught up and read this - delightful, I love both the poems, and though a bit younger than you well recall THAT kind of teacher- the kind who teaches shame... Years afterwards, sharing memories with friends, we decided our teachers had driven ambulances or been landgirls in the War, and it had made them treat 'boomer babies' roughly. I also remember the clothes: dresses passed down from 2 older girl cousins, jumpers knitted by Grannies, when the bag of hand-me-downs arrived, I'd worry that maybe I'd grown too fast to fit the dresses, they always looked so seductive, and had come as a surprise! That is the mid-50s-early 60s for you...
22 July 2021 at 11:28