Coming for a Walk? by Mari Howard

For July, writing in what we call a heat wave here in the UK, I’ll take you around a nice cool nature walk. We going to the Nature Reserve very near to where I am busy writing, with the Venetian blind pulled down, almost obscuring the sun outside baking the garden in its midday heat.

Entering the nature reserve, we turn to the left, and ducking under the low branches of several hazel trees, approach the pond. Today I am hoping to see that the swan pair, who sadly lost their eggs, probably due to unseasonal snowfall in late April, have not only returned but decided to stay.  White feathers float on the surface of the pond today, which might look alarming but is completely normal, indicating that it is the Swans’ seasonal moulting time. And there they both are, paddling around towards the back of the pond. As we emerge from the shade of the trees onto the flat, dry, muddy preening place, we hear the chirping sound of small ducks, and the call of a Moorhen. 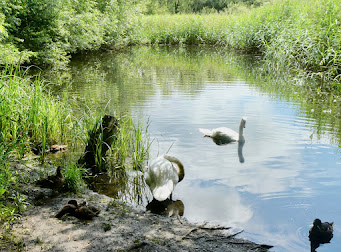 On the shore stands a brown female Mallard, gathered all around are her family of fluffy half grown chicks. I have brought some special duck and swan pellets today, and as we pause and  throw some into the water, the whole Mallard family potter towards the water and jump in. Next comes the mother Moorhen appears, leaving her chick calling from the reeds. Meanwhile the swans increase the speed and purpose of their paddling, and soon the whole group of waterbirds are swirling and swooshing the water, as they vie for the pellets… 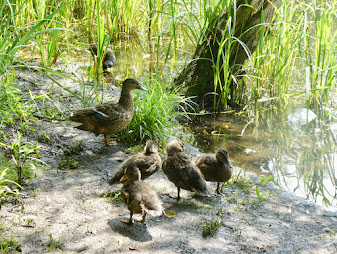 We leave them to their feast and follow a narrow path bordered by lush undergrowth back to the aptly named Frog Lane, which will lead us to the Meadows. Frog Lane was once a main thoroughfare towards a large stretch of common land, a small village and farms. Now it is a muddy track between overhanging trees, with a ditch on one side and reed bed on the other. The air is full of birdsong, occasional small songbirds flutter up disturbed by the noise of our approach, jackdaws argue in the treetops, pigeons flap overhead. 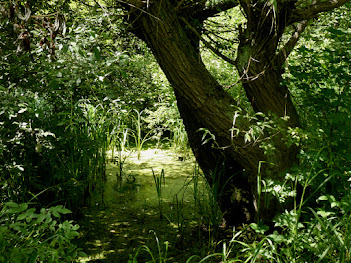 I'm also hoping to see some Dragon or Damsel flies at another smaller pond, but suspect the numbers will be down on last year due to the pond drying up due to a long rainless period after breeding time.  Sure enough there is only one Common Blue turquoise damselfly and one Ruddy Darter, who hover above the surface of water, and refuse to land on the surrounding foliage and be photographed. This whole nature reserve was once a boggy area, and another pond, at present covered in green duckweed, was possibly formed while reclaiming the land.  Looking through the reed and surrounding trees, shrubs and other plants, in this heat and humidity the scene suggests a rainforest. 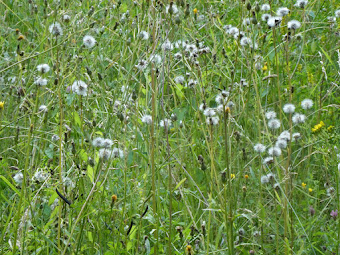 Walking on we reach the flower meadows: they’re slightly past their best by late July, though new flowers will continue to appear until early autumn. Passing the first meadow we note an abundance of fluffy seedheads, among them a few purple Knapweed flowers. Further on a whole meadow is covered in white oxeye daisies, more knapweed, wild carrot, a few bright poppies (which mostly flowered earlier), yellow vetches, Hedge Bedstraw, and the tall Mulleins at the back, just coming into flower.

Butterflies, especially Speckled Wood, Ringlet, and Meadow Browns, flutter between the flowers, and we spot a Cinnabar moth resting on a wild carrot flower, along with a small bee.  (Later, I shall properly identify this moth - it was not a Cinnabar but a Scarlet Tiger. Both those moths belong to the same group, and both are poisonous, signalling this to possible predators by their bright colouring, and that of the their stripy and hairy caterpillars, which feed on Comfry, among other plants,  which grows in abundance in the Reserve. )

Returning by the back path, we pass a meadow bright with yellow Melilot and purpleTufted Vetch, and by carefully turning over something which looks as if it might be chosen as cover for Slowworms (legless lizards) we catch sight of a slowworm and a toad before they hurry off to hide.

The Toad looks extremely strange in my photo, like a little statue of some strange, humanoid creature!) Following a path between blackberry bushes, we notice how the berries are beginning ripen, the jackdaws are still quarrelling, and a helicopter is whirring overhead…

Today the naturalist has won over the sociologist. I’ve taken you on a walk I love to do in all seasons, watching the changing progress of the plants, birds, and animals as they produce their offspring year by year. In winter and early spring, it’s tempting and very possible to photograph the songbirds, or to witness the frog and toads partying (a noisy annual 3-day mating event) in the big pond. Today’s walk is a fairly obvious way of not writing a rant about the inadequacies of our leaders, the vexed question of quite why they’re throwing caution to the winds over mask-wearing, the onward march of climate change, or even some unnamed public contentious issues. How much better to think about the birds and the butterflies, how wonderful to live their lives… or the lives of the foxes and squirrels, who are hiding in the depths of this space

Susan Price said…
Oh, thanks for that, Mari!
It's baking here also and I can't face a boiling hot car journey to my nearest countryside. But with the help of your blog I can imagine cool waters and feep shadw. *My own little pond has almost dried up.)
22 July 2021 at 07:58

Ruth Leigh said…
What a beautiful piece! I loved it. I felt that I was there with you. For those who do not use naughty words, Ruddy Darter sounds like a great alternative. "You stood on my foot, you ruddy darter!!" Love that you chose to take us on a nature walk rather than the alternative. Thank you. It was a delightful diversion.
22 July 2021 at 08:28

Clare Weiner (Mari Howard) said…
So glad this fitted the bill in our present heatwave: thank you allfor your appreciative comments!