A Walk in the Park by Misha Herwin 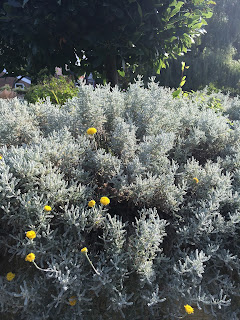 Yesterday I joined a writing walk in our local park. It’s something I’d never done before and had no idea of how it would work.

So much, no doubt, would depend on the weather and in that we were lucky. The sun shone, the day was warm, almost too warm for the scarf, winter coat and Docs I was wearing. Wrapped up against the possibility of any change in temperature, I’ve been caught out too often by the changeable British climate, I set off a little later than I had hoped and got to the meeting place to find that no one was there.

For a moment I was tempted to go back home, it’s only a five minute walk, and I could spend the rest of the day working in the garden or even doing some writing. A glimpse through the black iron gate showed the group already in session so in I went.

Sue, the group leader, explained how the morning would work. For ten minutes we would walk around the park, on our own, or in groups, looking for and noting down, anything yellow. Then we would come back sit on the benches at the picnic site and expand on what we had written. After that we would feed back to the rest of the group.

Although I was with people I know and like, I chose to wander off on my own. Having to look for a specific colour concentrated the mind. I saw the yellow buds and under petals of white roses, the yellowy green fronds of pampas grass, the citron sharpness of leaves and pompoms of flower heads on silver foliage.

With the images came the words. Sitting in the sun, I honed and edited and to my delight a poem took shape.

Walking and writing is something I’m definitely going to do again. I’ve often found that the process of walking frees the mind and imagination, but this searching out of detail opened up so many possibilities.

At the end of the session, Sue gave out a copy of “Colour Walk” by Barbara Hickson; a poem which begins with a “Yellow poster in a window” and ends at the station where “all destinations listed in yellow.”

It’s a structure I’d love to try out, so maybe later this week, if the weather holds, I’ll put on my Docs, take pad and pen and do my own colour walk.

Sandra Horn said…
What a great post! Thank you! I agree absolutely that walking frees up something and promotes creative thoughts.
11 October 2021 at 10:53

Peter Leyland said…
Great post Misha. I have done walking/writing myself but not with a group. The feedback must have been good too. I hope your next colour walk goes well.
11 October 2021 at 15:21

Cecilia Peartree said…
That sounds like a great thing to do. I would never have thought of it, although certainly when walking on my own I've sometimes been able to find the next step in various works in progress.
12 October 2021 at 10:57