Confessions of a word-haunted wimp by Sandra Horn

There are parts of some books I just can’t read because they have such a powerful negative effect. That bit in Wuthering Heights where Cathy’s ghost taps at the window gives me the heebie-jeebies so badly that I can hardly bear thinking about it, much less reading it. I can watch it on screen with no trouble, but Oh! Those words on the page! 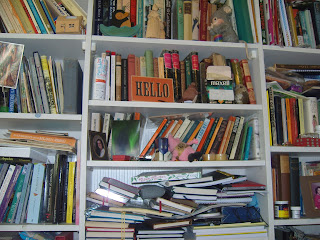 There’s another book I can’t find now after so many years. I’ve buried the author and title somewhere in the depths of my brain. It’s about a young woman who introduces herself as a bastard – illegitimate rather than a nasty piece of work – who meets and falls absolutely in love with an older man who has been deserted by his wife. After he dies, she discovers a message scratched into a window with a diamond: his initials and his wife’s, intertwined, with a date. The date is relatively recent and she realises that he had never stopped loving his wife and that they had met, at least once, since. It haunted me for ages – the thought that she’d had no idea. If I could find it, I probably ought to read it again to see if the sting has gone out of it now. I have recently re-visited Margaret Kennedy’s The Constant Nymph, which upset me badly when I was younger, but now, although the end is still moving, it has much less power.

On a brighter note, words-on-the-page can have me bubbling inside with joy or dreamy with content, or away with the pixies for hours. I don’t think anyone would know, to look at me, that I’m an invisible guest in The Fountain Overflows or I Capture the Castle or The Serpentine Cave, or any of the other beloved re-read books in the stack by my bed, or that, in the way that certain snatches of music can be earworms, so can some words – especially but not exclusively, from poems. They pop up unbidden and at any and all times, no matter what I’m doing. A cold coming we had of it; miles to go before I sleep; in each glint a finger-width of sea; Now sleeps the crimson petal, now the white, I and Pangur Ban, my cat; In doggerel and stout let me honour this country; and ink will spill; Bone of the ranked heights; a long wake of solitude; Mortal, guilty, but to me the entirely beautiful; our sheep-bit thyme; Woolly-bear white, the old wolf is listening to London. I could go on and on, I’ve hardly got started, but I’ll stop the list now; the list of my delightful companions as I walk down the road, dig weeds, knit, bake, etc. Unthinkable to be without them. Here’s the thing, though: there are no visual images with them; just the words. The blesséd words. Sometimes music if they are song words, hymn words, arias, but basically, words that can frighten, depress, delight, inspire or simply be company. Hallelujah! (that’s a good ‘un).

Cecilia Peartree said…
I have a complaint about this post - it was so interesting that it kept me away from what I was supposed to be doing for ages, as I started to think about 'I Capture the Castle' (it was my favourite book for quite a few years and I haven't read it recently) and then about some other books I read around the time I first read it, and then I browsed for them online....

These days I tend to try not to read books I think will upset me in some way, which probably means I am missing out on a lot of really good fiction, but never mind, there is always a lot more to read!
20 October 2021 at 12:08

Bill Kirton said…
Lovely to read, Sandra, and how nice to know that your head’s full of such things/thoughts as you go about your business. Despite the fact that I’m not myself a poet, my equivalents are snatches of (or even complete) poems whose glories counteract (indeed overwhelm) the grotesque misuse of words perpetrated by … well, we all know who, and his name has no place among your own choices or any of those which carry the true power to entrance us even in our most mundane moments. Among many, many others, my own constant reassurance that all’s right with the world (and the many alternative worlds) is Yeats’ Song of Wandering Angeus – especially that final couplet.
20 October 2021 at 15:04

Reb MacRath said…
Lovely, Sandra. My mind is also a-cluttered with snatches of poems I've loved...though I'm sorry none of my favorites made it to your list. (Auden, Cohen, in partic.) I can't think of any words that upset me too much to reread. Maybe because the artistry transcended the sad facts.
20 October 2021 at 22:00