Life Goes On by Cecilia Peartree

Over the last few weeks I've gradually got the feeling that we have come through the worst of the pandemic. This could well be an illusion, of course, and we certainly have other problems to deal with at the moment, to make up for the loss of the constant worry about catching a potentially fatal illness just by doing something that was previously normal such as boarding a bus.

My first glimpse of normality was when my son and I travelled to Llandudno and back by train(s). Even this wasn't entire normal as we wore masks all the way, despite the failure of many other passengers to do the same, and there were seats cordoned off and a lack of refreshments even on the first-class part of the journey (Edinburgh to Manchester). There was more of a sense of adventure than usually accompanies travel within the UK, too.  This more than made up for the hassle of having to change trains three times on the way and three on the way back, and my son didn't grumble at all, not even when we had to wait an hour and a half for our connection at Manchester Oxford Road,  which isn't the most interesting railway station in the world to put it mildly.

After that, I felt it would be silly to try and avoid going into the centre of Edinburgh on the bus, something I hadn't done since March 2020. So on the 24th of September 2021 I set off, masked but optimistic, to meet my grandson and his other granny and great-aunt at the Festival Theatre for a children's show. I love the theatre, and one of my biggest worries during the first phase of the pandemic was that my favourite theatre, the Royal Lyceum, for which my friend and I have had season tickets for quite a lot of years - at least 20 or so - would have to close down for good when it was forced to go dark for months earlier in the pandemic. It was very exciting to be in a theatre again and see something, even if the show had no plot and was accompanied by a good deal of background noise from the very young audience. 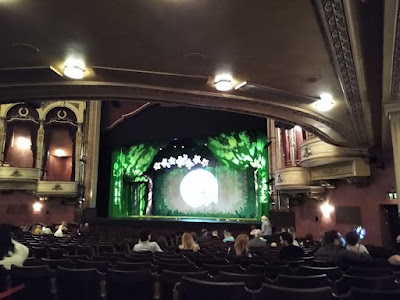 Encouragingly, the next sign of normality was the arrival in my email inbox of the announcement of a new season of plays from the Royal Lyceum Theatre itself. This seemed like a very good omen as I had in fact arranged to meet the friend I always went to the theatre with the following day for lunch, involving another trip into town on the bus. I was pleased to find myself quite blasé about getting on the bus that time, and completely laid-back about eating lunch in a restaurant. As my friend said, it's the first time on a bus that's the most difficult.

If there's a downside to all this activity, it's that I have less time to write. However that isn't necessarily such a bad thing. I don't actually write all day even if there's nothing else to do. I am far more likely to scroll through Twitter for ages or search online for summerhouses, to name but a couple of distractions. Going out into the real world and interacting with people for a while gives me a lot more 'inspiration'!

Umberto Tosi said…
Thanks for sharing your first post-pandemic "coming-out" adventure. Vaccinated and boosted, my inamorata and I have ventured forth, step-by-step as well, noticing damn little that's back to normal, but making a start. Sunday we attended an art gallery opening - masked, except to partake of a banquet table of wines, cheeses and other tidbits. The theme of the show was "survival" featuring several artists' interpretations of the pandemic - an initial set of impressions not all of which had found their voices.
5 October 2021 at 14:38

Reb MacRath said…
How refreshing it was to read this post of an uptick in the pandemic that has seemed like forever. Later this year I plan to make a few excursions to the cinemas. And next spring I have tickets for a cross-country trip by rail. The return to more life in our lives can't help but be good for our writing.
5 October 2021 at 23:14