Wrestling with an octopus -- Misha Herwin 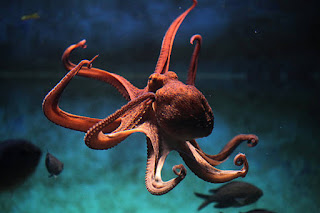 When it comes to writing a novel, I’m a planner not a pantster. Once I’ve got an idea, I can sit down and do a chapter by chapter synopsis. This isn’t necessarily the final version but it is more or less the shape the book will take. From then on it’s fairly straightforward. I sit down, I write and, when I have finished, I edit. The editing might involve a little re-structuring but it general this is fairly minor.

That’s how I usually do it. With my current WIP the whole process is more like wrestling with an octopus.  There are so many tentacles to drag me down and when I escape from one, another is waiting to twist and tangle my thoughts. I have a basic narrative. I have characters that I'm growing to know and mostly to like, but it wasn't coming together and after 40,000 words I was at the point of giving up when I posted my dilemma on various writers’ forums and on Twitter.

Fellow writers were quick to help. Some people suggested putting the m/s away for a while and coming back to it. I could see the sense in this, but I was afraid that if I put the novel in a metaphorical drawer that would be in the end of it and even in the midst of my despair I could see that my story had potential. And I didn’t want to lose the characters, even though it was their interplay that was causing me problems.

Another solution was to start from a different point of view, which made sense to me as my central character wasn’t fleshed out enough and telling the story through someone else’s eyes might work better. My protagonist wasn’t going to let me go, so I tried various other tactics to learn more about her, one of which was to change her name and some of her history.

At that point things began to fall into place but it still wasn’t right. Because it was proving so difficult, the only way I could keep going was to make myself write for at least twenty painful minutes a day. Going to my son’s for Christmas put paid to that and in a break from writing and worrying about the writing, the tentacles loosened, my subconscious clicked into action and I woke up one morning not only knowing that the book had to be written in the present tense, but itching to get on with it.

It’s still slow going. Re-writing what I already had and adding to it as I go along isn’t easy, but finally the novel is evolving and it’s no longer a case of forcing myself to do the twenty minutes, but being desperate to find more time to write.

For the time being, the octopus has slunk away under its rock. I’m not saying it’s gone completely for there are still problems to solve and I wish I was further along with the narrative than I am, but for now I think I’ll go back to my WIP.

Peter Leyland said…
Love that Octopus metaphor, Misha. Thank you for an entertaining post about writing a novel. Will keep it n mind...
11 January 2022 at 15:00