By Debbie Bennett - May 06, 2022
In an effort to forget that April 2022 ever existed, I’m going to try to find something upbeat and positive to fill my blank screen today. Last month was stressful, dealing with elderly parents, emergency hospitalisations and Alzheimer's. I’d like to thank our very own Julia Jones, without whose help and advice on John’s Campaign, I’d never have had the knowledge and mental fortitude to stand-up to NHS bureaucracy, and my dad would have been left alone in hospital for over a week with no visitors … Julia – you have my eternal gratitude. 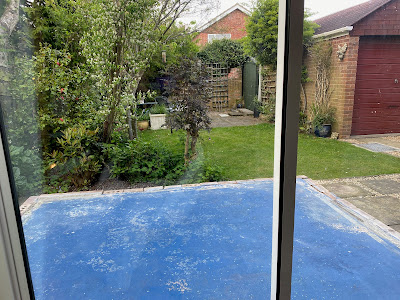 Moving onwards to May and I sit here looking out of my dining room window to a large blank space where the conservatory used to be ... Well I say conservatory - it was more of a lean-to with a polycarbonate roof, blown double-glazed windows and single-skin leaky, rotten wood base panels. A room that was impossible to heat in winter as it lost heat faster than it warmed up! 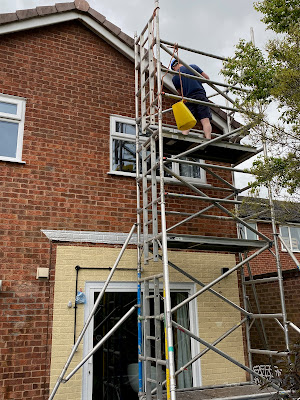 So we took it down last week. Or rather Andy did. Then - while we had the space before the new conservatory arrives tomorrow - we hired a scaffolding tower to repair and replace all the dry verge across the back of the house.
We used to have our own scaffolding in the last house. Bought for a few quid off somebody, it lived behind the garage and consisted of a huge pile of metal poles and a load of bolts - it was solid and heavy, but not particularly safe, especially with only a couple of old planks to stand on (they kept getting repurposed for other things ...). We left it behind when we sold the house as this place doesn't require anything like as much exterior maintenance and there was nowhere to store it anyway.
This kit we hired (four days for the price of two thanks to early delivery and a bank holiday) was so light and easy to put together - with huge poles for extra stability, a built-in ladder and a series of little trapdoors in the floor of each stage, so you can't fall very far.
So who has scaffolding in their books and is it a good thing? Scaffolding gives you the ability to construct things - imagine trying to build a house with no scaffolding and no way of getting to the upper floors safely in order to put the roof on? Scaffolding gives you a strong base to stand on with lots of support. It holds you up as a writer and makes you feel safe ...
But who wants to feel safe? in the picture above, we had to keep removing the supports, taking off the top layer, moving the whole thing a few feet to the left ad then reassembling it all again for the next few bits of plastic. So much faff, just to have something strong to stand on, whereas with some bravery, a ladder and a figurative leap-of-faith, we could have had endless possibilities and been finished a whole lot quicker! Or Andy could anyway - I don't do ladders or scaffolding.
In reality, it's all a bit of give and take, isn't it? We use scaffolding for the genuinely hard stuff where you really need a strong platform, but for a quick fix and to keep flexibility, sometimes a ladder is just fine! It's all about balance.
At least that's what Andy said. And he's the one who'll be putting up the new conservatory next week.
building conservatory construction debbie bennett scaffolding

I wrote a response to this last week from my holiday in Corfu, but they never seem to get through unless I use my PC at home. Anyway now I'm back I just thought I'd say I liked the scaffolding metaphor for writing. Even the essay such as I write has to have a structure. I try to have a beginning a middle and an end, like a story.

I wish Andy every success with the conservatory. My neighbour has been putting his up for six months and it doesn't look any nearer completion. Now I know the reason - no scaffolding!
10 May 2022 at 14:46