On Research and Writing by Wendy H. Jones 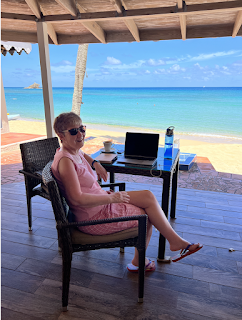 How can you resist a writing blog that starts with a view like this? In case you're wondering, that is the Caribbean Sea, and that's me writing. Before you think I spent two weeks drinking cocktails whilst channeling my inner Hemingway, that wasn't quite the case. Let me backtrack. I was fortunate to receive a research grant from the Society of Authors in order to got to Antigua and research Nineteenth Century Naval History and Antigua in the Nineteenth Century. Therefore, I was actually out there doing research. Yes, I really was and what an amazing time it was.
So, how does one go about doing research in another country? The perfect starting point is by realising that it's not going to flow as smoothly as it does in the UK. You really are on Caribbean time. Now, don't get me wrong, everyone is lovely and really keen to help and support, it just takes a little longer than when it does in the UK. The people in the archives were amazing, bringing out a microfiche and threading the tapes in for me.
I spent several amazing hours checking out the local newspapers of the time which really did contain everything. One quickly realises that you are several pages in before you get to anything of importance. Or do you? That may seem the case but it is not. The newspaper may start with advertisements but they are a wealth of information. Take, for example, the image below. 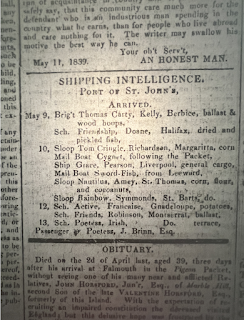 This is the local shipping news which tells you what ships had arrived in Falmouth Harbour. This was of great interest to me but it got me thinking, why would it be of interest to those living on the island. The answer came in several other adverts for goods which had arrived on those ships. Every single thing they ate or used in Antigua, apart from sugar, came in on ships. Nothing was grown or developed locally apart from sugar for export. I discovered, despite the plethora of fish and seafood in the seas around the island, all fish came in barrels from the UK e.g. herring and salmon from Scotland. Now, my books are about a Naval Surgeon from Scotland and he would have been eating fish from his native country whilst several thousand miles away. That blew my brain when I thought about it. I loved looking through the news which actually told me what was happening in the UK at the time, or at least three months earlier as the news took three months to arrive in the Caribbean colonies. I was surprised that they were all interested in news from the USA. I read a letter from Queen Victoria announcing her engagement and a president's speech. It was absolutely fascinating.
I was also fortunate to get access to the local museum archives and spent time reading excerpts from Admiral Lord Nelsons letters - yes I know it's too early for me but who could resist. I mean, I was in the Royal Navy for six years, so come on. They also pulled out this book which was a wealth of information. 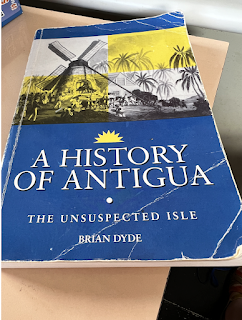 A private tour of Clarence House the original naval Commanders house gave me an outstanding view of both Falmouth and English Harbour, as well as the forts that defended the entrances to both from the French with whom Britain was at war. I could imagine the Commander watching the harbours from his wrap around verandah watching the forts as the soldiers fired on the French ships. This sort of situation is almost impossible to envision unless you have your feet on the ground and are walking the walk. It was amazing.
Just in case you think it was all work and no play, work was also a joy. There was a long weekend while I was there, with everything shut, so my office moved back to the beach where I consolidated what I was doing. And, I channeled my inner Hemming way by inventing a new cocktail I give you - Writer's Ruin. 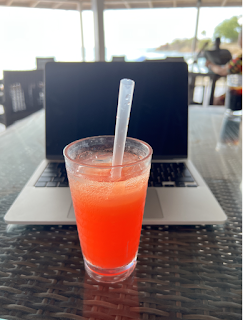 T conclude I can highly recommend visiting the places you are writing about. If they happen to be somewhere sunny and hot, all to the good. If not, I would still recommend you do it. There is no replacement for walking the walk. Thank you once again to the Society of Authors for this amazing opportunity.
About the Author
Wendy H. Jones is an award-winning, international best-selling author who writes adult crime books, young adult mysteries, children's picture books and non-fiction books for writers. She is also a writing and marketing coach, runs the Writing Matters Online School and is the CEO of Authorpreneur Accelerator Academy, The president of the Scottish Association of Writers and hosts The Writing and Marketing Show podcast. She is currently writing a series of historical fiction novels based around the life of a 19th Century Surgeon in the Royal Navy.

SC Skillman said…
It sounds fascinating Wendy. Wonderful when you go to research something and discover all sorts of other unlooked-for things as well. Antigua looks a lovely location too!
16 May 2022 at 20:02

Peter Leyland said…
Great post Wendy. I love sea stories but would like to channel my inner Conrad rather than Hemingway.
16 May 2022 at 22:17

Jenny Sanders said…
Wonderful! Love that Writer's Ruin cocktail too. I'm fairly certain that all my time in South Africa over the past umpteen years will eventually filter its way though to some stories. There's nothing like a bit of local knowledge to bring authenticity to the narrative. Since you've already brought Dundee to life, it will be fascinating to 'visit' Antigua soon too.
17 May 2022 at 03:32

Joy Margetts said…
Can't tell you how jealous I am. Not of the sun, sea and cocktails, funnily enough, but of the unlimited access to such rich historical source material. The thing of dreams for me.
20 May 2022 at 11:04