Memories of Ukraine – by Elizabeth Kay 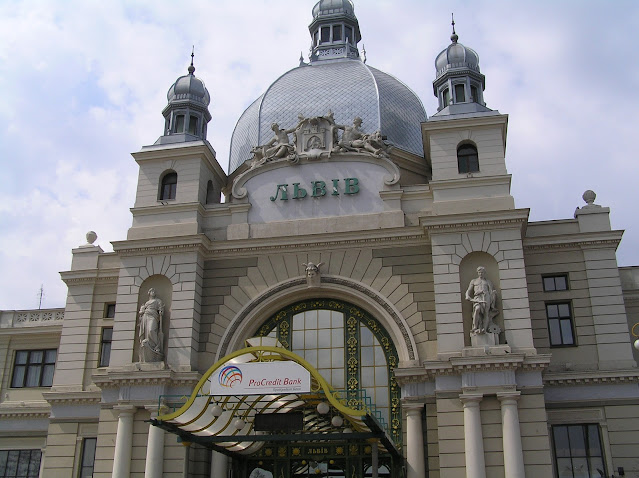 Lviv Railway Station, an exit to safety for thousands

As I am having an operation on my wrist I am writing this post some time in advance, because I won’t be able to type for a while. I thought I would devote it to my memories of Ukraine, as I attended a poetry event at the Ivan Franko University in 2006, and a children’s writing conference in Lviv in 2007.

My father was born not far from Lviv in 1900, and considered Lviv (Lwow as it then was) to be Polish. Ukraine, like Poland, has changed hands many times in the past. However, when it comes to Russia the two countries are 100% united, and recently Poland has been helping Ukraine as much as it can. I was brought up to regard Russia with grave suspicion. I remember at infant school (I must have been six) going up to the teachers for some spellings when we were all writing about what we did at the weekend. The boy in front of me wanted to know how to spell banana. I needed to know how to spell Khrushchev and Bulganin.

When my father went back to Poland for the first time in twenty-five years I went with him. I was sixteen. I had never been abroad, let alone behind the iron curtain, and it was a shock. I had grown up in a country where you could say more or less what you liked. In Krakow, we had a code word which meant don’t say any more. My father only dared to go back once he had been naturalised British and had changed his surname to Kay – everyone called my mother Mrs K because no one could spell or pronounce Krzewinski. I had been accustomed to buying more or less whatever you wanted in the shops. The unavailability of many things was as surprising as seeing soldiers with submachine guns on the street, and the absence of private cars. Transport was tram, lorry, horse and cart – or a Mercedes, if you were a high-ranking party member. When I went there it was for Christmas, and it was very cold. Every time we went outside we had a tiny shot of vodka, from a bottle kept in the centre of the table. It is only recently that I have realised that the toast of “Do Centrala!” didn’t mean a salute to the bottle, but a highly sarcastic reference to the central committee of the Communist Party. 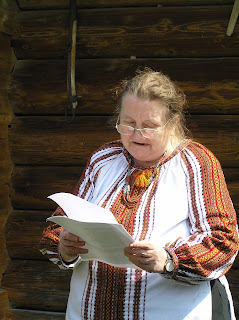 My friendship with the extraordinary Vera Rich presented me with the opportunity to visit Lviv, and do a poetry performance at the university. It was an emotional moment for me, as my father, to whom I had been very close, would have received his degree in the same hall and I was able to read a poem about him. I even found the house where his family used to live. This was a man who had been deported to Siberia at gunpoint by the Russians, and walked through Kazakhstan and Iran to Palestine, and from there to Monte Cassino. He was an artist, and painted what he saw. Many of his paintings are now in The Imperial War Museum. His wartime experiences made him kind to all living creatures. 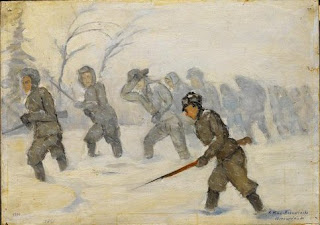 Separate our births.  A rime

Of white hairs and nightmares his legacy;

Pigtails and nightingales mine.

I can hear something fluttering -

In the sealed-off chimney

That once served a range.

He nods.  Fetches a hammer.

Wages war with a cold chisel,

Trapping debris in a curtain.

Iron hits the wall, each blow

A polished detonation of sound.

Bricks and mortar flake away

A telling background of silence.

Appalled at such destruction.

Whoosh.  A cascade of soot -

Echoes.  A black hole opens up.

A scratching, a scrabbling,

My father opens the door -

And, smiling, sets it free.

I have been watching the news with mounting horror, as the places on the news are so familiar to me and the naivety about Russia is extraordinary. I couldn’t believe it when Europe started buying gas from Russia. Couldn’t  anyone see what was going to happen? Other than Have I Got News for You, that is, with its opening cartoon sequence of Putin turning off the gas. Comedy can be adroit at telling unpleasant truths, and is sometimes the only way to make a point.  Zelensky’s Servant of the People is a masterpiece.

I have visited Lviv many times now, the last being in 2019 when it was an anniversary of Chernobyl. I attended a service at the Fire Station, and some of the original firemen who survived the making safe of the reactor were there. The shelling of the surrounding area in March was yet another example of irresponsible lunacy, and the soldiers concerned are, I believe, being treated for radiation sickness. I know the route the Ukrainian refugees have been taking to Poland, I know the station in Lviv, the train from Przemysl to Krakow, the change from Russian to European gauge and the ambience (!) of a Soviet train; huge, clanky, uncomfortable, no frills. Like the Russian state.

I remember Lviv as a friendly, bustling city, an intellectual and artistic hub, full of statues and churches and wonderful coffee shops.

Peter Leyland said…
That's a powerful piece Elizabeth. Although I've never visited Ukraine, I just love Poland, have fond memories of walking in the Tartras, and would have been in Wroclaw in March had it not been for my concerns, probably misguided, about the Ukraine war.

That poem about your father rescuing a dove from the chimney is just wonderful - an artist too, he must have been an amazing man. I am going to take some lessons here about autobiographical writing.

Peter Leyland said…
PS. Just looked at the pictures in more detail and what a lifetime is there. I do like the picture of the soldiers in the snow. I tracked it to the Imperial War Museum. Monte Cassino - I have an amazing book by Matthew Parker on that, 'the hardest fought battle of World War Two'.

Umberto Tosi said…
Thanks for this timely and moving post, Elizabeth. I happen to be involved in developing a special issue of Chicago Quarterly Review showcasing Ukrainian writers, which we've scheduled for February. I will refer this to my CQR colleagues and to the anthology's guest editor, noted translator Halyna Hryn, editor of Harvard Ukrainian Studies.

Joy Margetts said…
A moving piece, thank you Elizabeth. What a gifted artist your father was! And such evocative photos and memories. It is genuinely heartbreaking.
20 May 2022 at 11:02