The A -Y of Mysteries - Sarah Nicholson 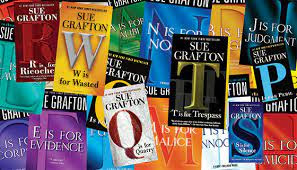 Sue Grafton, born in Kentucky in 1940, was the daughter of mystery novelist C. W. Grafton and she decided to write her own series of mystery novels because these were the books she had been raised on.

"The mystery novel offers a world in which justice is served.

Maybe not in a court of law," she has said,

"but people do get their just desserts."

She created her protagonist Kinsey Millhone in the late seventies and freely admits she is her alter-ego.  “a thinner, younger, braver version of herself, living a life she may have led had she not married and had children at a young age.”

“She is a marvel for which I take only partial credit,

though she probably claims all the credit for me.”

Millhone, 32-year-old, twice divorced licensed PI, started solving crime in the fictional city Santa Theresa California in 1980 in the first book of the series “A is for Alibi”. Grafton made a conscious decision that Kinsey should age one year for every two and a half books. By the time we reached the latter stages of the series, in “V is for Vengeance”, Kinsey is 38.

She never got to celebrate her 40th birthday, not because she died on a perilous case, although she came quite close on occasion, but because sadly in 2017 her creator died before she finished the last book “Z is for Zero”. The alphabet series of mysteries came to an abrupt end. The final book in the series will forever remain “Y is for Yesterday”.

“The alphabet now ends at Y,”

Whereas the Stieg Larsson Millennium series, featuring the unparalleled Lisbeth Salander have continued with a new author taking over the helm, Grafton never wanted anyone else to write about Kinsey.

It’s a little frustrating to not know if any of her romantic liaisons ever progressed to more serious commitment, but perhaps it’s comforting to know we will never have to deal with the grief of losing her loveable octogenarian landlord Henry or any of his remarkable siblings.

Kinsey and her assorted “family” have been a part of my life for many years. I am a huge fan of Sue’s writing and because of the first-person narrative it is easy to warm to Kinsey, she is everyone’s badass alter ego fighting crime and righting wrongs.

I really would like to read the whole series again someday, I’ve even toyed with the idea of making “Kinsey Millhone and the Alphabet series by Sue Grafton” my specialist subject on Mastermind, which would give me the perfect excuse to dive right in and re-live the 1980s. I probably can’t remember all the plot twists, so they would seem fresh, even if dated, set in the eighties with no internet or mobile phones.

But something holds me back from re-reading, maybe it’s the huge to be read pile on the shelf that entices me to read something new I’ve never read before. If only there were some undiscovered Kinsey stories for me to read… 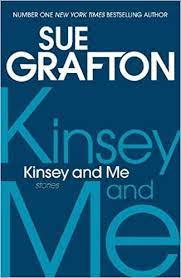 And that’s when the book caught my eye in the library.


“Kinsey and Me Stories” by Sue Grafton isn’t a new book; it was published in 2013 between “V is for Vengeance” and “W is for Wasted”. It features nine short stories about Kinsey and a collection of stories about a character called Kit Blue.

The book includes a short preface and introduction which offer much to those interested in Grafton’s writing process as she explains the subtle differences between a crime, mystery and detective story, the necessity for fair play, how the reader must see every clue the detective finds and the killer cannot just pop up in the last paragraph out of context.

It’s like a masterclass in just a few short pages of what has made her such a superb story teller. I’m almost loathe to return the book to the library, even if crime is not a genre I would ordinarily write.

She writes about her research, how she read books in “forensics, toxicology, burglary and theft, homicide, arson, anatomy, and poisonous plants” to educate herself for each case Kinsey takes on. She tells us the 1974 VW that Kinsey acquires in “H is for Homicide” was a car she originally owned and jokes that while she didn’t object to Kinsey using it, “with her driving record, I refused to put her on my insurance policy.”

The “all-purpose dress” is real and it gets an outing in this book of adventures but these short stories have no place for the “peripheral characters” we know and love as “such indulgences are stripped away”.  Misdirection is “pared to a minimum”. Grafton’s words give a writer so much to ponder, comparing the short stories with the much longer novels is fascinating.

There is even more insight to be gained about Grafton’s own family history when reading the stories in the second half of the book about Kit Blue, a “younger version” of herself written as a way to come to terms with the grief she felt after losing for her mother.

I would certainly recommend this book to anyone who loves the Kinsey Millhone novels and also to those who enjoy the writing process and want to see behind the curtain into the world of a much loved and prolific mystery writer.

that she will live in this world long after I am gone.

I trust that you will enjoy her companionship as I have.”

Joy Margetts said…
So obvious how much you appreciate Sue Grafton's writing here. A lovely tribute. I haven't read the A-Y series but am now intrigued to. if only my TBR pile wasn't already toppling!
5 May 2022 at 11:06

Griselda Heppel said…
What a prolific writer! How frustrating that she got so near to completing the whole alphabet of book titles, but still staggering that she got that far. I'm not a great crime novel reader and to be honest, I find that sort of alphabet series off putting. I mean, a trilogy is one thing... but a twentysixology? Gulp.
9 May 2022 at 19:20