The Science or Art of Indexing (Cecilia Peartree)

During April 2022 I did something I had never done before. This is not as exciting as it sounds, though I was unreasonably excited by the result. I think my former career in database-wrangling played a large part in the excitement, because I spent at least some of my working life trying to make it easier for people to search for information. These efforts were often foiled by people’s reluctance to use the search tools available, but that’s another story.

I’ve already written on this blog about the family history narrative I published last year. Although it was framed by my own search back through the generations, I did include a list of sources, which because of the subject-matter incorporated places to visit – not that it was possible to visit most of them in real life at the time I published. However it was only recently that I thought of adding an index to the book. I don’t know why I didn’t think of it in the first place, but it might have been because I imagined any readers, who would all be drawn from my close family anyway, just starting at the beginning and reading through to the end, whereas in fact some of them might have wanted only to look up certain topics or places or family names and go straight to the right page.

In any case I had always thought of the task of compiling an index as something that would be beyond me, partly because of my complete ignorance of how to go about it, and partly because I vaguely recalled a friend having to do this some years ago, right at the end of the publication process for her scholarly book about a specific aspect of 17th century history. It sounded like a gruelling task, the way she talked about it. I pictured her wearing her fingers to the bone working on a manuscript by candlelight, although in fact this didn’t happen quite as long ago as the image below might suggest. 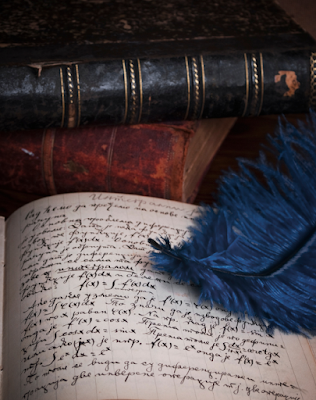 I didn’t think Microsoft Word would have the answer, but because I’ve previously managed to persuade it to do many things I had imagined were beyond its scope, such as starting the page numbering of a document on page 3 or 5 instead of the first page, and creating a table of contents with more than one level of headings, I thought I would have a look at the menus there and see if there was an ‘Index’ option. Sure enough,  there it was under the heading ‘References’.

There were a few false starts but not nearly as many as I had expected. Unlike the use of sections to get the page numbering right, which I used to have to work out again from first principles every time, it was fairly obvious how this worked. You had to use the ‘Mark Entry’ option to mark the words you wanted to appear in the index, and then click on ‘Insert Index’. I marked a few entries one at a time, not daring to select the ‘Mark All’ option, before realising that using ‘Mark All’ would in fact painlessly gather up all the matching words and combine them into one entry in the resulting index.

I suppose the ‘art’ aspect of this is in choosing the right words to mark up – in the case of the subject-matter I was working with, this wasn’t too hard. I mostly included family names and place names, with a few other keywords I thought might be of interest, such as calico, cholera and explosives. The men in that branch of my family were not terrorists but quarry workers, by the way.

Apologies to anyone reading for whom this is all really obvious – I just couldn’t believe it was so simple.

Here’s an image of a page from my index, which I can’t help gloating over! 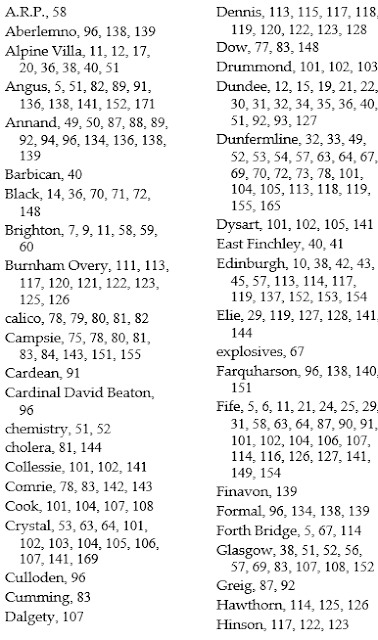