This week my books arrive from the printers. I am waiting in eager anticipation to open that box, redolent with the scent of newly printed paper. Longing to handle the weight of the book, to hear the pleasing creak of the spine as I flip through the crisp white pages. And to see the cover in all of its resplendent glory.

I have had an image of the cover in a computer file for months, and it is stunning. Everyone who has seen it has remarked so. I am really very pleased with the design, and am eagerly anticipating what it will look like ‘in the flesh’. Will the colours be as vivid as I hope, will it stand out in a crowd, will it draw the eyes of potential readers, look good on the shelf of a bookstore? 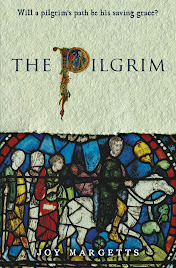 This particular cover was a collaborative effort. My cover designer had worked on the first book and so certain features were repeated for this, the second. The font, the stunning illuminated capital, and the off-white torn top section that represented the vellum used by medieval monks. But the main image I found myself. Finding a representation of 13th century pilgrims was not easy. And then in a moment of inspiration, I remembered where I had seen such an image.

In the Trinity Chapel of Canterbury Cathedral there are a series of spectacular stained glass windows, known as the Miracle Windows – thus named for the depictions of miracles attributed to St Thomas a Becket – martyred on the altar steps of that very cathedral. Among these are a few panels that depict pilgrims – those who were among the first to travel to Canterbury – long before Chaucer wrote his tales. And one of those images depicts a group of travellers, unusually several of them on horseback. This fitted perfectly with my tale of pilgrims traversing a well worn pilgrim route on horseback.

We had found a beautifully colourful authentic looking illustration of early medieval pilgrims for my book cover, but I didn’t realise when we did, just how authentic this panel of coloured glass was.

In the late Victorian era, Samuel Caldwell, a distinguished glazier had worked on the Miracle Windows, replacing many broken panels and recreating missing stained glass images. Because of the brightness of the pilgrim image, and the crisp clear colours, modern experts had assumed that this panel was indeed one of Caldwell’s recreations. But a modern glass expert, Rachel Koopmans, by chance, found images of the panel dating from before Caldwell’s restorations. She and her team were given permission to remove the two and a half foot square panel for further investigation. A closer examination of the panel determined that the majority of the glass was medieval in origin, and the painting techniques likewise. Not only was it medieval, but it was early medieval, dating to around 1180 when the construction of the Trinity Chapel was completed. This was barely twenty years after Thomas a Becket’s death.

Even more exciting for me, 1180 was barely twenty-five years before my novel, ‘The Pilgrim’ is set. I could not have a chosen a more authentic source for my cover image than this. And I did so without knowing it's provenance. More info about the stained glass panel can be found here:

Update: happy to say the books have arrived and are just as lovely as I hoped! 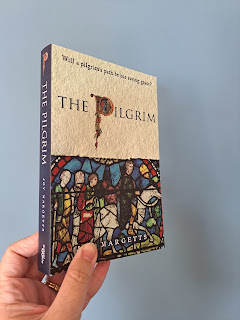 Peter Leyland said…
That looks pretty amazing Joy. I know the cathedral well as much adult ed. is based at Canterbury Christ Church University just next door. One year I went on the pilgrimage around there led by one of our delegates.

Joy Margetts said…
Thanks Peter! Canterbury was my 'home' cathedral for my formative years... I grew up in Thanet. It's very many years since I last visited, but the longing to do so is ever greater now.
23 June 2022 at 13:51

Susan Sanderson said…
I went to Canterbury Cathedral on a Sunday school outing. The guide was very enthusiastic about the stained glass. In fact she bored at least one of the younger children, who said, 'I never want to see another stained glass window!'
Looking for ward to this book, Joy!
24 June 2022 at 07:24