Reading for the Jubilee by Sarah Nicholson

Having a competitive nature, whenever a special book list is compiled, I immediately scan the list and count how many I have read.

The BIG READ list in 2003 was decided by three quarters of a million votes from the British public, to determine the nation’s best loved novel.

There are 200 books listed, many popular novelists feature more than once, including Pratchett, Rowling and Austen, so if you have devoured any of their writing you can score highly.

I admit I have read all of the Harry Potter books and all of Jane Austen’s novels and my total for the Big Read List is approximately 50 out of the 200. I’ll say approximately because some I think I remember reading at school and might have skipped a few pages and then there are audio books – do they properly count?

But even allowing for the multiple books by a single author my tally isn’t as great as I thought it would be.

The BIG JUBLIEE READ of just seventy books has been drawn up with totally different criteria. There was much consternation in some quarters when JK Rowling didn’t make the cut, but then neither did many other worthy authors and this particular list has been very carefully curated. 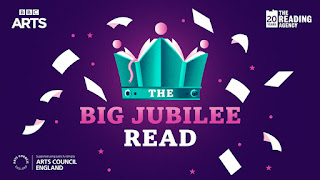 It is divided into decades, ten books for each with titles chosen by authors from across the commonwealth reflecting a wide range of genre as well as some over-arching themes for each decade.

Scanning the list there were so many titles and authors I’d never even heard of. Counting up, I discovered I had read ten, only a seventh of the list (I’ve just bumped it up to 11 by finishing The Handmaid’s Tale this week).

At least I reached double figures and have run out of fingers to count on!

My total had been helped greatly with the inclusion of some book club reads I might not have picked up otherwise. And that is precisely the reason for such a list, these are a diverse set of books that can really broaden our experiences, teaching us about other places in the world and different perspectives.