It can be hard to work out how much reality to incorporate in your fiction. I have just published (yet) another mystery novel in a lengthy series that is set in a fictitious small town on the coast of Fife near the very picturesque real-life village of Culross. Over the years I’ve drawn inspiration for plots and sub-plots from real life in several cases. For instance, a story that revolved around an inheritance was based on something that really happened in my own family, though happily without the murders I introduced into it in the novel. My mother was contacted out of the blue by a firm of solicitors who were trying to track down the relatives of one of her first cousins who had died intestate. The task was particularly tricky because of the number of cousins and the extent to which they had dispersed across the globe. In the novel I brought many of the cousins back to Scotland for an ill-fated family reunion. In real life, however, they just stayed where they were and waited for news of their share of the inheritance.

In another mystery in the same series I used the scenario of a winter that was particularly cold and resulted in blocked roads and cancelled buses, even in Edinburgh city centre, as the background for one of the novels. Ice and snow are particularly useful for mystery writers, especially when people become stranded together miles from anywhere, as in the Orient Express scenario, or perhaps they meet with some kind of accident that prevents them from going to the rescue of another character. I’ve occasionally borrowed elements from my former professional life too, though in rather different settings, and I’ve used odd isolated characteristics of real individuals in my fictional characters. It’s impossible not to do this I find. Fortunately the individual they usually resemble most is me!

This latest novel is set in the local college in my fictitious small town, and I’ve drawn on my past experience of attending a fairly similar place more than twenty-five years ago. I suppose colleges have changed a bit since then, but I wanted to use a particular scenario from one of the classes I was in, which everyone just accepted at the time but seems a bit odd now that I look back on it. I only had to give it a little twist to make it quite sinister, or at least I hope that was what I did.

Oddly enough, only the other day I happened to be talking to the mostly older members of an activity group at our local community centre about quite an important issue we are waiting for a decision on from outside the organisation, and some people in the group got quite over-excited and started talking in terms of marching with placards and even chaining themselves to railings if the decision didn't go the right way. I was pleased to witness this, not so much because I thought any of these protests would have an effect on the decision, but because one of my recurring elderly characters had spent some time in the above-mentioned latest mystery novel making a placard and trying to organise a sit-in. I came away from the meeting with the sense that life and fiction had come together in rather a pleasing way. 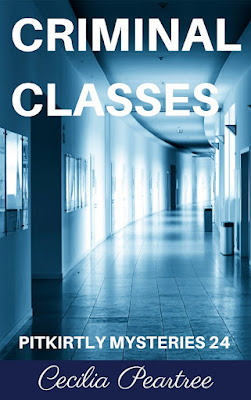 Criminal Classes - now available from Amazon and other online retailers

Griselda Heppel said…
Very satisfying when you find people really do go the way you imagine them to in your fiction! Especially when it’s against a lazy assumption I bet a lot of people make about the elderly ie cocoa and slippers by the fire rather than making placards and chaining themselves to railings. I hope whatever the issue is, their views are being taken into account.

What a rich set of different circumstances in your life to draw on for characters and plots. The missing beneficiaries of a will… ooh there’s lots one can do with that. Thank you for this fascinating post.
16 June 2022 at 16:21