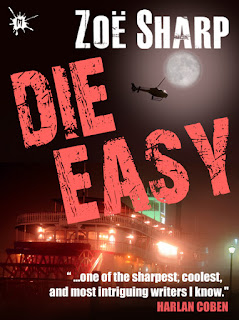 It seems hard to believe, looking back, that it was only a little over a year ago when I brought out my first indie e-book. It’s been one of the best moves of my career.


But I had no idea when I first started planning this around April 2011 that it was going to be at all successful. In fact, I’d been warned against it by industry professionals who made gloomy predictions that a) all the books would be immediately pirated, and b) that nobody would buy them anyway.

But it was a decision born of frustration as much as anything else. Time and again I was told by potential readers that they always preferred to start reading a series from the very beginning. The early books in my Charlie Fox series had been out of print since my UK publisher was bought out by a larger house, and the US small press who’d contracted to produce them folded after the death of the publisher, while my mainstream US publisher considered the European-set early books “too British” to find an audience.

In Killer Instinct: Charlie Fox book one the character starts out as a self-defence instructor with a murky past in the British Army that ended in disgrace. It’s in this book that Charlie turns a massive personal corner from being a former victim to someone who proves she can take care of herself. She gradually grows over the course of the first three books, meeting up again with one of the army instructors who played a part in her downfall and going undercover into a close-protection training school in Germany. Her first proper job as a bodyguard happens in First Drop: Charlie Fox book four, and that was where my first US publisher chose to pick up her story. Back in April last year, I decided that everyone who wanted to would be able to catch up with Charlie’s past and find out how it all began.

When you write a series like Charlie Fox, where the characters develop as they go on, any missing episodes are keenly felt. Having the first five novels largely unavailable was a huge gap in the character’s backstory, and―understandably―readers were put off giving the later books a try because of it.

E-books allowed me to bridge that gap. I was able not only to make the early books available again, but to give them a recognizable series look they’d never had before. And just as an introduction to the character herself, I put together four existing short stories that featured Charlie into an e-thology, adding a brand new tale to the mix, an excerpt from Killer Instinct, a character sketch and author biog, and calling the result Fox Five: a Charlie Fox short story collection.

And the result? I was amazed that the books started selling almost immediately and have continued to do so at a rate that far exceeded anyone’s expectations, least of all my own. For the first time I know exactly how things are going, all the time. And it’s been both a liberating and inspiring experience.

Twelve months on, I’m now bringing out my first digital original novel, Die Easy: Charlie Fox book ten. Yes, it’s part of the existing series, but it has not previously been conventionally published. My current US publisher, Pegasus, went to contract before the book was even written, so they’ll be bringing it out in the States and Canada in January, but the rest of the world is down to me. Kindle first, then trade paperback and other e-formats to follow.

So, why is the backlist doing so well―better, in fact, than it ever did via the conventional publishing route? The truth is, I don’t know. I’ve tried to include enough extras to appeal to my readers, including excerpts from the next book in order, and guest excerpts from other mystery and thriller authors I admire.

I always felt the books were good, and the character engaging. The reviews and award nominations seemed to echo that, and Lee Child was generous enough to write a Foreword for Killer Instinct. Maybe the difficulty of obtaining the early books was the major stumbling block. Distribution is one of the bugbears of a great many authors. Bookstores and supermarkets can’t stock everything, and they tend to go with the same safe familiar names. If you’re not in that clique, you’re not going to get the exposure you’d like. But digital books are available all day every day, everywhere. Maybe that’s enough to tip the balance.

Whatever, it’s given my writing career a huge boost. I’ve been able to completely retire from the day-job to write full time. It’s enabled me to work on other projects, too, including a standalone crime thriller which will be out before the end of the year. Suddenly, being able to publish more than one book every twelve months has made me realise that there’s nothing to stop me writing more. And I can explore other genres. The latest project has been a supernatural thriller. The next will be a trilogy with a new character, possibly a new series.

But that’s not to say I’m going to abandon my roots. Charlie Fox is where it all started for me, and for as long as she has a journey, I’ll tag along for the ride.

Zoë Sharp opted out of mainstream education at the age of twelve and wrote her first novel when she was fifteen. She created her no-nonsense ex-Special Forces trainee turned bodyguard, Charlotte ‘Charlie’ Fox, after receiving death-threat letters as a photojournalist. Her work has been nominated for the Edgar, Anthony, Barry, Benjamin Franklin, and Macavity Awards in the United States, as well as a CWA Dagger, has been turned into a short film and optioned for TV. She blogs regularly on her own website, www.ZoeSharp.com, and on the acclaimed group blog, www.Murderati.com.

The latest in the series is Die Easy: Charlie Fox book ten

‘Sean didn’t remember finding out that I wasn’t to blame for ruining both our careers – that I’d nearly died for him. He certainly didn’t know that I’d killed for him.’

Professionally, she’s at the top of her game, but her personal life is in ruins. Her lover, bodyguard Sean Meyer, has woken from a gunshot-induced coma with his memory in tatters. It seems that piecing back together the relationship they shared is proving harder for him than relearning the intricacies of the close-protection business.

Working with Sean again was never going to be easy for Charlie, either, but a celebrity fundraising event in aid of still-ravaged areas of New Orleans should have been the ideal opportunity for them both to take things nice and slow.

Until, that is, they find themselves thrust into the middle of a war zone.
When an ambitious robbery explodes into a deadly hostage situation, the motive may be far more complex than simple greed. Somebody has a major score to settle and Sean is part of the reason. Only trouble is, he doesn’t remember why.

And when Charlie finds herself facing a nightmare from her own past, she realises she can’t rely on Sean to watch her back. This time, she’s got to fight it out on her own.

One thing’s for sure—no matter how overwhelming the odds stacked against her, Charlie Fox is never going to die easy …
Posted by Debbie Bennett at 05:00

Great to see you here, Zoe, and to read your post. Fascinating. We've been rubbing shoulders for quite a few years at Harrogate, although I'm not sure you'll make the connection. Like you, I embraced epublishing in March 2011, and I haven't looked back. The Indie world's a great world, free from publisher's shackles, and I intend to enjoy it as long as I can.

Hi Chris. You are always one of the highlights, Chris, so no need to be modest :)

Congrats on the epublishing. Fun, isn't it?

I did the creative Thursday at Harrogate a few years back. Keep meaning to do the full weekend when I have some spare cash!