It's a “Multi-Platform” World - Andrew Crofts

By Andrew Crofts - October 27, 2012
This week the cameras started rolling at Twickenham Studios on a pilot episode of “Steffi”, a dramatisation of my book, “The Overnight Fame of Steffi McBride”, which is destined to be broadcast over the internet and then go on to television through a maze of deals involving a variety of major sponsors and agreements so complex they make your head spin. In fact, I haven’t even tried to understand them, having total faith that the producers at Emerald Films know what they are doing in this “multi-platform” world.

The cast are a mixture of established television actors, pop stars and internet stars and the producers have been working on the whole package for a couple of years since first expressing interest in the original book.

In that time the print version, published in the traditional way by Blake publishing, has pretty much sold out and there are negotiations under way for them to produce an e-book version.

Blake Publishing has always been one of the more fleet-footed, broad minded and innovative of publishing houses, so I suppose it should be no surprise that they have also been open minded enough to give me the go-ahead to put “Steffi” up on Wattpad, (where her mother, “Maggie de Beer”, is about to pass the 300,000 hits mark with her memoir “The Fabulous Dreams of Maggie de Beer”). I have commissioned a new cover from the talented Mr. Elliot Thomson, making this the fourth cover he has done for me.

What an interesting new world we are living in. 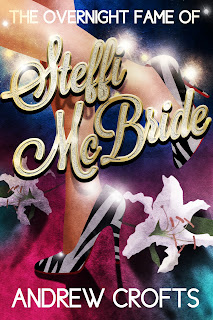 Stephanie Zia said…
How exciting. Many congratulations, also on another fabulous cover there.
1 November 2012 at 09:59