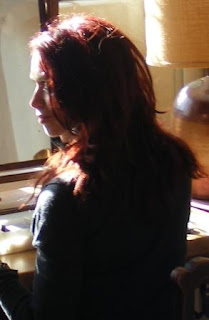 So we sit down, wake the laptop, place coffee beside keyboard, flex knuckles, stare meaningfully at the ceiling, put on headphones... and begin.
What's going into our ears? Something pure like birdsong? Something contemplative and thoughtful for the earnest business of noveling?
Not necessarily. It might just as easily be grinding guitars and ripping vocals.
My blog series The Undercover Soundtrack has been going for a year now, and more than 50 writers have so far shared the music that helped them invent and hone their novels.

Soundtracks
Undercover Soundtracks are not the songs their characters like, or the music played at their weddings. They are writers' secret ingredients, meditative antechambers where they can study their characters’ true natures, conjure an atmosphere or examine the nature of an elusive moment.
Among the first contributors were members of this group. Dan Holloway searched for nostalgia and directionlessness. Catherine Czerkawska puzzled over whether the book came first or the music. AE founder Katherine Roberts dreamed up her novel to folk and Celtic music and former member Nicola Morgan drenched herself in Coldplay until her family yelled ‘Noooooooo’.
Another early AE, Linda Gillard, scored a hit with readers when she explained how a Philip Glass piece rescued her novel's structure. And if you're a fan of John A A Logan, watch out because he's coming soon with the sounds that serve his dark imagination. In fact, just watch out.
Some soundtracks are historically literal. Katherine Langrish chose the troubadour songs of the 12th century for her tale of lost love. Ellie Stevenson found possibly the last song ever played on RSS Titanic for her novel Ship of Haunts. Erika Robuck evoked 1930s Cuba with Cole Porter.
Indeed Cole Porter trots through quite a few Soundtracks regardless of period, as does the film composer Hans Zimmer. Other writers’ favourites are Seal and JS Bach . (There's probably a joke in there.) 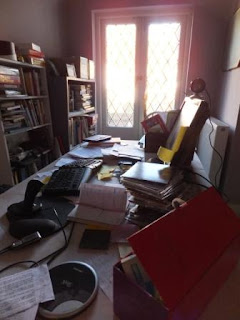 One or many?
Sometimes a writer's soundtrack is a few sacred pieces, even stretched across multiple novels. Sometimes one novel alone gets a soundtrack longer than a Broadway musical.
Undercover Soundtracks also mark how we draw on our real lives. Jessica Thompson used a track with desperately romantic associations to recreate a scene between lovers  Catherine Ryan Howard made a musical time capsule to revisit long-ago adventures for her second travel memoir.
Some writers find lyrics are unbearably intrusive. Others happily ignore them and give themselves to the emotion, as though the words weren’t there at all. Once a song enters a book's landscape, it means whatever the writer wants. While I was writing My Memories of a Future Life, a perfectly famous song ambushed me from the radio and it was as if I heard it for the first time.
Ritual
For some writers, music is a ritual. Jennie Coughlin repeats The Boxer for hours, a rhythmic slave driver, drumming her to the finish. Catherynne M Valente has a special piece that begins every creative day.
Ask a non-writer to set up an author’s desk and the last thing they would probably furnish it with was music. But so many of us are completely fuelled by sound, writing in a state of semi-possession. Maybe, as one commenter said, it's because music can punch so much experience at us without a single word, goading us to bend our own artform a little better. Many contributors cheerfully - or ruefully - admit they can't read a note yet they find that music makes fundamental sense. 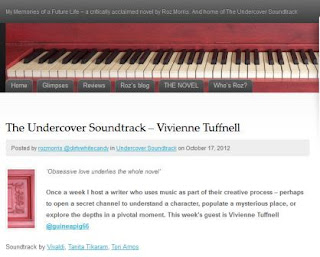 Whatever theory you favour, these pieces seem to turn a novel inside out. We come away - or I do - having glimpsed the soul of a book - and of a writer too.
Does music tell you stories?

Roz Morris is a bestselling ghostwriter and book doctor. She blogs at Nail Your Novel  and has a double life on Twitter; for writing advice follow her as @dirtywhitecandy, for more normal chit-chat try her on @ByRozMorris. Her books are Nail Your Novel: Why Writers Abandon Books And How You Can Draft, Fix and Finish With Confidence, available in print and on Kindle  She also has a novel, My Memories of a Future Life available on Kindle (US and UK) and also in print. You can also listen to or download a free audio of the first 4 chapters right here.
Posted by Roz Morris aka @Roz_Morris . Blog: Nail Your Novel at 00:00

Being a tone-deaf philistine I settle for any background noise as company - usually the TV! At the moment it's Time Team repeats.
Writing marvellous prose to evocative music sounds wonderful but is possibly beyond me ...

One of the things I've done for the one or many question is use different soundtracks for different characters. I find, especially when I'm writing alternate chapters in different voices, that having a CD I always listen to for each character helps me get straight back into voice

I heard a famous short story writer interviewed on TV once, explaining why he couldn't write a novel, despite trying. Finally, he said that all his author friends who did write novels had a love of music (which he didn't have), and he wondered whether there might be a structure in a long narrative that is somehow analagous to musical structure.
I hope THE BOXER mentioned there as inspiration is Simon & Garfunkel's song...if so, I loved that song when I was 15, used to play it over and over...but it was as much the story told in the lyrics that fascinated me as the music.
Folk music has those old stories, which Simon & Garfunkel often tapped into...
But I remember being fascinated by those albums, like BAT OUT OF HELL,which came with the lyrics printed on the album sleeve...that fusion again of story and sound...
DIRK WEARS WHITE SOX by Adam and the Ants too (!)...had great little stories buried in each song...and printed on the album sleeve to read...
But then I think films should be brought in too...like Kubrick saying he found the music for BARRY LYNDON first...and then built the film up from there...sometimes each movement of an elbow or finger in that film is synchronised with the music...even down to a glance or pen signature on a cheque...orchestrated to beautiful music by Bach, Vivaldi, Paisiello, Mozart, Schubert...
Don't worry Roz...my UNDIE SOUNDTRACK won't be TOO pants...and is still a-percolatin' in da rhythmic pipeline!

Fascinating to read about all these different experiences - and how music influences us all! Ice Dancing has had a completely different 'soundtrack' and I've been obsessively playing 'Hockey Songs' (We Will Rock You, Who Let the Dogs Out, Cotton Eye Joe, Nothing's Gonna Stop Us...) but especially in the car while I drove and did a lot of thinking. Lord knows what fellow drivers have made of this music emanating from my little blue Polo.

Hi guys! Been away so I wasn't able to reply immediately....

Madwhippitt, I've never heard of writers using TV as background, but as Cole Porter would sayL anything goes!

Dan, the character CD is a nice idea, especially with multiple narrators. Funny how music can be such an instant mental switch.

John - yes, Jennie was indeed using S&G. I remember becoming hooked on it when I was a teen as well - there were some terrific story songs around.
And that's funny what you say about music structure and narrative. There must be so many parallels between the two artforms - repetition, expectations, themes and textures. When I was researching for My Memories of a Future Life I remember coming across an explanation of the various musical forms, which might have themes, developments, expositions, recapitulations .... all with recognisable counterparts in prose stories. Definitely looking forward to your Soundtrack...

Hi Catherine - you've changed musical personality completely for your Ice Hockey book! What a difference - and I wonder how such a change of pace and mood might have gone down in the old days when publishers liked authors to bring out similar books every time. If you'd like to come back for another Undercover Soundtrack piece you're most welcome.