I self-published my first thriller Hamelin's Child back in February 2011 - a giant step after many years of "we love it, but we can't sell it" rave rejections from the traditional publishers. Even being long-listed for The Crime Writers' Association Debut Dagger Award didn't seem to make me a marketable proposition.

So I decided to fly solo - but first I needed a cover. My first attempt at cover design was using a lovely graphic by a talented friend of mine that just didn't work as an ebook cover - there wasn't sufficient contrast at the small size you need for amazon and other ebook retailers. But I attracted the attention of a traditional author who introduced me to my current designer JT Lindroos and held my hand through the design process. Thus the cover for Hamelin's Child was born - and I learned a lot in the process.

I recently asked JT to design me a cover for the sequel Paying the Piper, which I hope to have out before Christmas, so I thought I'd share the cover story here. I contacted JT saying I wanted something that would clearly be a part of the same series as Hamelin - something with a gritty, urban feel to it. I suggested tower blocks, playgrounds, wasteland etc as ideas for backdrop. JT came back with the first three versions on the right.

Versions 1, 2 and 3 are all essentially the same, but with different colours. The font is the same as Hamelin and pulls the two books together. While I liked version 1, the colour combination doesn't say "thriller" to me - it says DIY manual (I don't know why!). Version 2 had a good colour, but the black text was lost at thumbnail size and the turquoise just a little too close to the blue of Hamelin. Version 3 was a great colour combination but it was so strong that the image disappeared at thumbnail. And I wasn't fussed about the actual image - it was too stylised and lacked context. I also didn't like the exact 45 degree text angle.

I went back to JT and said could he find a better image? I had a play around on image websites and marked a few photos that I liked - not necessarily "right" but pictures that appealed or had the right tone:

I've no real idea why these specific images appealed to me. Since most of the story is set in Cheshire and South Manchester, I looked for tram images, cities and urban decay (all such cheerful stuff!). I have an idea in my head of how I want the overall cover to look, but I'm not particularly good at communicating that to a designer - in that respect, I find JT brilliant to work with as he's very intuitive and can work out what I want better than I can!

JT came back with  version 4 - a tram of some sort which looked OK and more of what I had in mind. The text is at less of an angle and there's more context to the image. But then there was version 5 as seen below which was pretty near perfect and coveys the exact atmosphere that I wanted. There's a figure for context and a depth to the image that rivals the original Hamelin. Side by side, they are similar but different.

Sp pull the text away from the edges a fraction so I can get postcards printed and still leave a margin for bleed and we have a new cover for my next book: 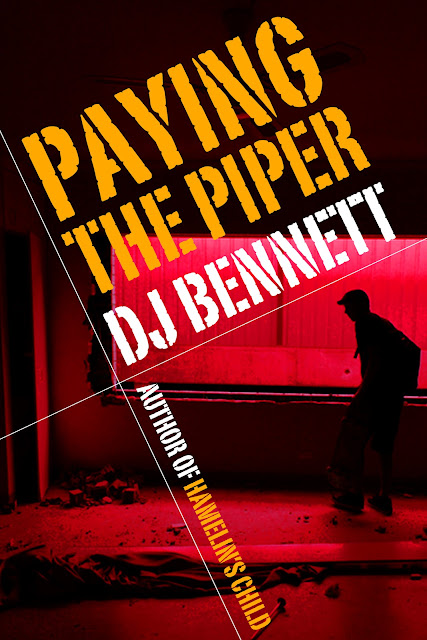 Lynne Garner said…
Having redesigned the front cover of a book already released because I wasn't happy with it I understand the trials and tribulations of cover design. I think the cover you've chosen works well. What is the font called? It has a good feel to it.
6 October 2012 at 09:56

Chris Longmuir said…
Of the top three covers I did actually like the third one. I thought it had a striking effect even if the detail was lost. However, I think the one you've settled on is excellent and I wish you well with the book.
6 October 2012 at 10:57

Kathleen Jones said…
I really like the one you've chosen Debbi - exactly right. It's so difficult - Neil and I had about a dozen goes to get the Sun's Companion and then finally found exactly what we wanted on Shutterstock. But isn't it good to be in control of the 'look'? Yes!!!

Debbie Bennett said…
Haven't a clue on the font, Lynne. I can probably find out for you though.

Enid Richemont said…
Great cover image - will add your designer to my list of illustrators.
8 October 2012 at 17:55