Crimefest was a Blast by Chris Longmuir

By Chris Longmuir - June 19, 2013
I’m shattered, worn out, and just want to crawl into a corner and sleep! Why? Because I’m just back from Crimefest, ’s own convention for crime writers.

Why do I do it? Why did I trot off to Crimefest again this year? Well, it’s simple really, because as well as being a shattering experience, it’s also a stimulating one. There’s a buzz at this crime conference that you don’t get anywhere else.

The place hotches with readers, writers, editors, publishers and agents. Some writers attend hoping to attract the eye of the latter three, but I’m afraid my interest is mainly the readers and writers. Since going my own way I’m no longer interested in a publishing deal or agent representation. I’m happy to be independent.

The panel I was on, aptly named ‘A Suitable Job? Diverse Characters in Crime’, was moderated by Adrian Magson, and he did a brilliant job. The other panel members were Mary Andrea Clarke, Roz Southey, and Nev Fountain. Mary and Andrea write historical crime, and writes humorous crime. I read his book and it’s hilarious. So, apart from , I was the only one writing contemporary dark crime, which I felt gave me an advantage. Our panel was the first one, therefore I suppose we opened the convention. The experience was great. The audience were lively and full of questions, and people came up to me all over the weekend with comments relating to it. Oh, and the other thing, the spin off, if you like, was that I sold just over 100 downloads of Night Watcher over the convention period. You can imagine, I came away chuffed to bits.

So, why do I do it? Well, it’s because I meet so many nice people there, make new friends, and come home revitalized, stimulated, and ready to jump into the fray again. That’s after I catch up on my sleep, of course.

Roll on next year and I’ll be heading for Crimefest again. 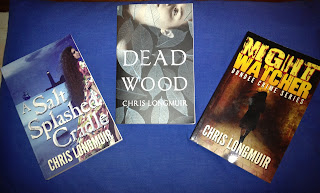 Lydia Bennet said…
I was just told the other day that you can't get onto panels in the crimefests now without your publisher applying on your behalf, is this not the case? How does a bold indie like yourself keep getting onto panels if it is? Anyway good for you, these events are great fun, and crime writers a great bunch to be with, as I found at Harrogate when The Rotting Spot came out - though there has been some scorn for the ebook and indie revolution...
19 June 2013 at 10:01

Chris Longmuir said…
That's true of Harrogate, but any author who signs up for Crimefest has a chance, particularly if you're an early booker, which I was for this year's Crimefest. Last year I booked later, but got a 20 minute Spotlight session, which is one you do yourself in one of the smaller rooms. Crimefest is smaller and cosier than Harrogate, and I think I like it better.
19 June 2013 at 10:06

Bill Kirton said…
Knowing you, Chris, I suspect your enthusiasm for the genre and the business is part of the reason you're a popular panellist. I'm glad (but not surprised) to hear that it went so well. Next stop the Edinburgh ebook festival again.
19 June 2013 at 10:15

Lydia Bennet said…
thanks Chris for the info!

julia jones said…
Wish I'd been there Chris (and it's a great photo btw). I was on a panel a few years ago at the Bouchercon in Indianapolis and there were lots self-pubbers attending and many different ways of reaching out to potential readers - either in the formal or the informal sessions and by disseminating marketing material. Never seen so many bookmarks and postcards in my life! Everyone had to pay the convention fee (except no doubt the grandees whose publishers paid for them) but even having one's name on a list felt quite good. Probably reflects how much bigger the self-pub market is in the US. I agree one might be made to feel like a low form of life at Harrogate

Debbie Bennett said…
I've always fancied doing one of the crime festivals but never had anyeone to go with and don't fancy being a Billy-No-Mates ...
19 June 2013 at 19:20

Lynne Garner said…
Never been to a lit festival - keep meaning to. I do however try to attend at least one gathering of authors per year, as like you they inspire.
20 June 2013 at 08:58

Catherine Czerkawska said…
Everybody seems to enjoy crime festivals so much that it makes me wish I wrote crime novels of some sort. I never hear anything but good of them, unlike a few other festivals which sometimes seem to be a bit more po faced! I suppose I could just go as a reader! Sounds excellent, Chris.
20 June 2013 at 10:13

Chris Longmuir said…
Debbie, I'll be at Crimefest next year if you want to give it a go. As for Harrogate, I'm seriously considering whether this should be my last year. Not much leeway for Indies there!
20 June 2013 at 12:13