Reb MacRath's Dear Sir: It is My Honourable Duty to Reject the Disheartening Doodie of Your Form Rejection

By glitter noir - May 12, 2014
As I packed for the move to Seattle this fall, I made decent progress on all but one front: a, mountain of personal papers. Imagine 3000-5000 pages--everything from old love letters to leases, poems, resumes, professional correspondence, contracts, published articles, ancient receipts...Okay, now imagine all of that thrown into a barrel with 600 rejection letters dating back 20 years--picture all of this shaken wildly, then removed in handfuls and tossed pell-mell into boxes. 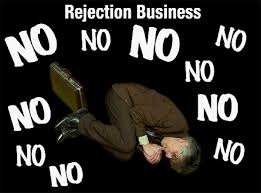 I faced something like that. And I suppose I could blame it on a half-dozen cross-country moves...or on a crushing divorce. But I think the truer answer may lie in the staggering number of rejections received over the course of two decades (after I'd published four novels preceded by twenty more years of rejection. Or to put that another way: twenty plus twenty years of failure with five years of success in between). I believe I numbed myself in ways I never knew. As I started to sift through the wreckage, I found unopened envelopes--which I'd rightly guessed to hold tiny form rejections. They'd have broken my back on the rack at that time. And so I tossed them into drawers, along with unopened bills...and an important personal letter I'd never known I'd gotten.

I felt ready to quit after two hours' work. Why not bundle the lot of it into a bag and then lug that off to the dumpster? Who needed further reminding of so many years of neglect and abuse?

But on the project's second night, my heart began to rally. I wanted these papers in order and, by God, I needed to keep them. The greater risk lay in forgetting the System I'd chosen to fight, writing the novels I felt born to write as well as I could write them. Whatever my problems, whatever the cost, I held fast to my love of my art.

I've gone on to publish six ebooks, with a seventh on the way. So let me give the many No's their burial inside a box--and get on with the Yes of the life and the career I enjoy now.

I've also learned a dire truth: we don't always know how badly we've been hit. We need help if we go to the mailbox with hands raised before us in terror like a villager in an old fright flick. We need to do something to counter the cumulative impact of year after year of rejection. And I believe that 'something' should be a pursuit we enjoy and at which we excel: whether sport, martial art or origami. The knowledge of excellence there, on the left, buffers the sting of the snubs on the right.

In a way what we're doing is transferring funds from one account to another:

The richer the sense of our personal excellence elsewhere, the more surely we'll cope with the cold-hearted rebuffs.

madwippitt said…
Some rejection slips are nicer than others and help keep the flame of optimism burning bright. Like reviews, just keep the nice ones! Although it sounds like you have a massive job on your hands sorting out all your papers - good luck with it!
12 May 2014 at 06:54

Nick Green said…
I prefer form rejections. No details to obsess over.

Lydia Bennet said…
I agree with Nick. most of the rejections I've had for novels were via agents, and so the publisher has to be 'nice' about it and invent a reason, I soon realised it was madness to take these seriously and try to change the book, as each letter said something totally different and someone on the 'inside' told me they just put anything. basically all that matters is they either take it or they don't.
12 May 2014 at 15:39

glitter noir said…
Thanks,Sue, for alerting me to my name omission. Nick, the worst rejections were the ones I called ' the strippies'. To economize, agents would print the same crap form rejections as many times as they could on one page, then cut these into strippies. When you received what felt like an empty envelope, you'd gotten a strippie.
12 May 2014 at 19:10

cherokee blacke said…
The bigger agencies may receive 500 queries a day. It would take over SIX HOURS to give five minutes to each of those queries. It's safe to say, I believe, that most queries are doomed in ten seconds--if they're even . Looked at.
12 May 2014 at 19:19

glitter noir said…
Thanks, Cherokee. Math isn't my specialty but I think the situation is worse than you suggest. Let's go with 500 daily queries. And let's assume that no agency can afford to spend more than 4 hours daily processing the queries. 4 hours is 240 minutes. They'd have to 'read' two queries per minute to get through 480. Oh, well, even if an agency's 'only' receiving 500 queries weekly, not daily, your point still remains. We can work on our queries until we turn blue--and get strippies spit out my robots.
12 May 2014 at 20:32