What to write about when all you want to do is go sailing? by Julia Jones

"Sir Walter Elliot, of Kellynch Hall, in Somersetshire, was a man who, for his own amusement, never took up any book but the Baronetage; there he found occupation for an idle hour, and consolation in a distressed one." If, for "baronetage" you substitute tidetables -- or better still charts -- then, at this time of year, I am your Sir Walter.

It's August, for heavens sake. The barometer is steady, the weather settled, winds are generally favourable, the crew are gathering -- all volunteers, not a pressed hand amongst them. I have a new chart. My lovely lovely older children are standing-by to stand-by on the caring front. So WHY am I still at my desk?

The annual Peter Duck sailing holiday is reliably the highlight of my year. It's short and it's oh, so sweet. The date is negotiated months in advance -- at Christmas usually . Not because flight reservations must be made or hotels booked but because they don't.  All that is needed is that my son Bertie, my brother Ned, his daughter Ruth and I all synchronise our diaries and steadfastly refuse to allow an iota of deviation, variation or wavering from The Week. Once the Date is reached, then where we point our bows is in the lap of wind-gods, the wave-shapers and the siren singing of the harbour nymphs. 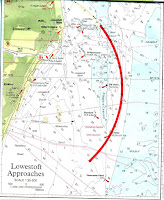 We talk about possible voyages, of course we do, when two or three are gathered together... Couldn't we visit Amsterdam? Come to Cornwall, Mum! Will this be the year we make it to the Baltic? That one's like a grail. We know perfectly well that we'd need several weeks, not just the seven days which is all that collective commitments will allow. So we give each other books about the Baltic when it's Christmas -- rather in the same way that I sold my bookshop customers sumptuous cookery or gardening books, complicit in the understanding that they were unlikely actually to re-landscape their 12' x 16' road-frontage patch into a sequence of water lily pools and cascading features...When I write, I surround myself with charts to give a sense of reality to my dreams.

This year we were tending to agree that we might initially head for Calais and then consider turning east for Dunkirk or south for Boulogne. But what would you do if you met a migrant, Mum? Welcome him, her and all their friends and relatives on board, I hope.
So, shamefully, when we leave our home river (TOMORROW, as I write this!!!) we'll be turning north instead of south. My newly purchased chart (Imray Y9) is for the North Norfolk coast and the Wash -- I'm attracted and terrified by its shallows and sands and complex shifting channels. Rather like a poor man's Riddle of the Sands -- though when I checked the distances reaching the Wash is almost as far as a full-scale Friesian island expedition. From Woodbridge to King's Lynn, for instance, is almost twice as far as popping across to Calais and there are long bleak stretches with very few ports of refuge.

WE're not demanding. Anything north of Lowestoft, even the briefest peep around the Yarmouth-Cromer bulge would be good. We nosed into Oulton Broad one year. There was no real room to sail but negotiating the railway bridges and the locks was fun. 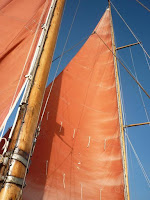 WE don't wash much, we eat rather badly, there's no privacy and minimal comfort. I get seasick and quite anxious. There are at least two deck leaks that I haven't managed to trace. So why am I counting down the hours with such pounding anticipation?


Yesterday I was in the middle of an intense conversation about Margery Allingham with a researcher for a forthcoming BBC Woman's Hour programme. I'd been hours entering figures into a business spread sheet (a private obligation that I'm not allowed to go away until Golden Duck figures are with the accountant) and, interspersed with that, I'd been tweeting and emailing for John's Campaign. It's all necessary and worthwhile etc etc but it's so sedentary and cerebral. There's no space for magic in my head and when a car turned into the drive and it was some of my children and grandchildren, arriving unexpectedly,  I felt bewildered as I struggled to re-orientate myself away from the world of screens and marketings. That's why I need Peter Duck. Even a few hours on board begins to clear my head and reminds me who I am.

And, from tomorrow, I have a whole week -- and a chart.

Susan Price said…
Wishing you a wonderful time, Julia - you deserve it.

Penny Dolan said…
This all sounds such a wonderful and much needed adventure, Julia. Please can we hear about the voyage afterwards too?
9 August 2015 at 09:45

Lydia Bennet said…
Smooth sailing Julia, hope you don't encounter Missee Lee in one of her bad moods! A well deserved break from responsibilities of other kinds. xx
9 August 2015 at 10:11

Catherine Czerkawska said…
Happy voyaging. My husband would seriously identify with this. He did make it to the Baltic one year, and even St Petersburg where the boat was impounded for a little while and they almost got deported, but that's another story! His holy grail is now Iceland, but he can't get anyone else to sail there. Me, not so much. I'm a fair weather sailor. But I can well understand that need to re-orientate yourself by going away and doing something completely different.
9 August 2015 at 10:48

Bill Kirton said…
I'm not bothered about visiting places but the thought of just being on a boat, sails up, no-one around, is soothing. Have a wonderful trip, Julia. You've earned it.
9 August 2015 at 11:17

Dennis Hamley said…
How ashamed you make me feel. I too have sailed all round the Baltic and luckily avoided being deported from St Petersburg, but I went with a thousand other people. Nothing wrong with Missee Lee, Valerie. 'Cambridge best for scholarship, Oxford best for marmalade.' A woman after my own heart.
10 August 2015 at 10:55

Kathleen Jones said…
May the wind be in your sails, Julia, and the sun at your back! Have a wonderful time and come back renewed!

barb said…
Both you and PD deserve this, Julia. I love that you are cherishing this opportunity to break free and enjoy the elements once again. Fair winds - Jon Tucker
14 August 2015 at 11:14