For God's Sake, Get Your Sexy Back!--Reb MacRath

By glitter noir - January 12, 2016
It happens to the best of us on both sides of the Pond: we sigh goodbye to our Sexy in time. Then we wonder endlessly how to get it back.

Now, of course, in an elegant group like AE we're far more likely to discuss our plumage than our poundage. Nor do we begrudge the few who never lost their Sexy:


Still, as some Italian or other once said, I found I'd come to a dark wood. And in that wood I feared the loss of the wild young stallions who'd coursed through my soul. You know, those writing Glory Days: before we find ourselves saddled with rules laid down by addle-brained agents...and fear of rejection or failure.

Pay attention. This next part's important:

You may not know your Sexy's gone until it's hit the road. Or as some say in the UK: until it's upped and left y'all. And this was driven home to me in a spectacular fashion last year. Location: San Francisco, where a strayed loin is the quickest way to get from Pant A to Pant B. Event: a walk through Chinatown. Down time before starting the next Boss MacTavin mystery, which I'd spent months researching.

As we walked, a friend remarked that he dug Boss MacTavin...but still preferred the series I call The Fast and The Furies. The four standalone titles I'd written so far had three things in common: they're stylish; they're streamlined; and they're all about running from karma. The series came more from the heart, my friend felt.

And so they had. But lately I'd started to wonder if I'd write a fifth. For more and more my thoughts concerned what works in Ebooklandia...what I must do to make my way. Now, suddenly on Grant Street, a wild idea possessed me:

Dead Again meets Julius Caesar today with a dark twist of The Sting. 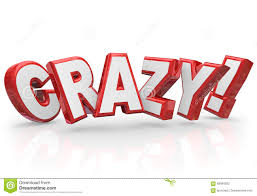 With no outline, with tons of research to do, and with no assurance that anyone would read the book, I started writing the next day. The creative free fall would last a full ten months. And the resulting book became at once a new departure and a coming home for me. It embodied my lifelong interest in suspense, mystery, Roman Lit, theories of translation, Julius Caesar, reincarnation, verbal razzle-dazzle. Furthermore, it was a powered by a blazing new conviction: that those could be smoothly blended without the stink of bookishness. A rousing entertainment. 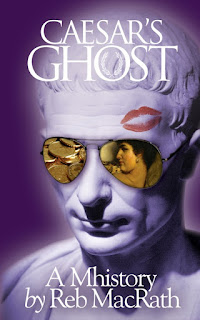 Caesar's Ghost, I'm pleased to say, did bring back my Sexy. Brought it back with a new twist: the experience and strength to yoke those horses and teach them new tricks.

Come. This bold ghost will lead the way to your own Sexy wrapped with a royal gold bow. And Cleopatra may show up to give you a kiss.
artistic integrity Caesar's Ghost Cleopatra Donna Tartt George Bernard Shaw Julius Caesar Sexy Tom Wolfe Yukio Mishima

Bill Kirton said…
Good grief! When I read (and enjoyed) it, I had no idea I was witnessing the new, improved, (gulp) sexy (gulp) Reb. If I had, I'd have made sure I took my medication first. However, I survived, and can confirm that it's a bloody good read.
12 January 2016 at 10:17

glitter noir said…
Thanks, Bill. And just think, I wrote it before returning to jogging.

Sue, the same artist I've used for Red Champagne, MonsterTime and the three rebooted Boss MacTavin covers. She does great work, I think. Her name is Jean Schweikhard. If you do read the book, I'll connect you. :)
12 January 2016 at 13:31

glitter noir said…
Thanks for the kind words, Jan.

Lydia Bennet said…
I see what you mean, Reb, we do sometimes struggle to keep our mojo working, and even wonder why bother - glad you are happy in your renewed Caesar salad days! As I did classics for many years I'm intrigued to know what you've done with that naughty emperor (each man's woman and every woman's man, as he was called in his day, and still finding time to fight battles etc, clearly he could get the staff) and look forward to reading it. It is a good cover, I see you are using mhistory as a crossing genres thing, interested to know if that works when people are browsing book covers.
12 January 2016 at 16:28

Dennis Hamley said…
'With no outline, with tons of research to do and with no assurance that anyone would read it...' Oh, how I empathised with those words. But it sounds great, Reb, and I'll buy it today. Monster Time review review son. At last.
12 January 2016 at 22:54

glitter noir said…
Thanks, Valerie. Time will either tell or toll on the cover's working power. But I still feel the artist did a remarkable job in getting these big things across: it's a contemporary tale with deep roots in Roman history...my Caesar is split down the middle between his undying love for Cleopatra and his drive to rule the world again (those dueling lenses on his sunglasses)...and the tone (not ooky-spooky, not comic...but cheeky--the lipstick on his forehead).
And, oh, the wee book does not evade JC's sexual rogueness.

Dennis, I hope you enjoy it. I'll look forward to your MT review.

And, both of you, I'd be very interested in your reaction to the classroom scene, in which my doomed teacher talks of artists through the ages facing the same plight: to find a niche that's theirs alone before it disappears.