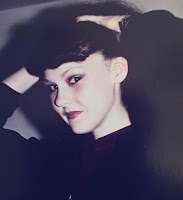 I was a weird kid, well weird for Nelson where I went to school. I was terrible at sport, obsessed with books and reading, wouldn't wear make up and thought there was something wrong with girls who covered their rough books with pictures of David Cassidy and Donny Osmond. Luckily back then school finished at sixteen and I was able to go to sixth form college. I was still weird, but it mattered less. I fell in love with my subjects, and with a few boys, started wearing (rather a lot of) make up and was angst ridden, academically ambitious but essentially happy.
I bother you with all this because yesterday I made the four and half hour train journey that took me back to my old sixth form college and thirty seven years back in time.
As soon as I got off the train I smelled it: a tang of something in the damp northern air, the scent of my past. I marched up the road in the wind and rain, head down and someone said' All right love?' and I was - extremely all right: you can take the girl out of Lancashire but you can't take Lancashire out of the girl. My inner northerner perked up and smelled the bacon butties.
The College isn't the same. There is a new building and it sort of hums with efficiency. We had a down at heel common room with a juke box. Now there is a proper lecture theatre and computers and lots of steel and glass. Everyone back then had a lot of hair and I don't think conditioner had been invented; we were spotty and badly dressed and not at all like the students of the new improved college. I half expected to see my old teachers, Doc Collins and Mr Monroe but they were long gone though the new ones were every bit as impressive: my old college is now one of the best in the country.
Everyone was so lovely to me that I felt rather fraudulent - particularly as it turns out - I was talking as an 'inspirational alumnus.'
You might wonder what this has to do with books and writing and to be honest so did I when I was planning my talk. What could I tell these sixth formers? I had no tips to give, no secret of my
( somewhat dubious) success. I suppose the only thing I could say is that writers aren't born but made of whatever is at hand. Most of us, I humbly suggest, are like everyone else only maybe less good at staying where we are put: we are always elsewhere in our heads. We are made  of awkwardness and desire, long solitary walks and book fed imagination, a little bit of millstone grit and a strong sense of our own importance.
I looked for the girl I'd been in the audience among all the polite girls sitting quietly and affecting interest in my ramblings. She was there, I know she was, looking at me cynically, wondering who the hell I thought I was trying to tell her anything.  So I didn't try to tell her too much.  You can't, can you? So I told her everything is grist to the mill, keep going and know that it is OK to be weird. There are a lot of us out there.