It's Research: But Not as we Know it by Wendy H. Jones 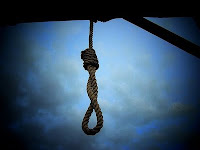 As a crime writer I often find myself doing research. This can take many different forms. but sometimes it can take surprising turns. Despite the fact I write contemporary crime novels, I recently did a lot of research on hanging. I now know how to make a hangman's knot which traditionally has 13 loops. However, some hangman's knots have 9 loops. I also now know how to tie a cowboy's Lasso  or lariat knot. These skills are essential in any crime writer's arsenal. Guns, bullets, knives, swords, crossbows, yep, I can tick them all off my list. This probably has me on some sort of government watchlist for my online habits. I'm expecting  the local police, Interpol and the FBI to come storming through my door any minute now. How is this different I hear you say. It's just the sort of research I would expect any crime writer to do. Of course you would be right. However, sometimes research can take a very surprising turn indeed. 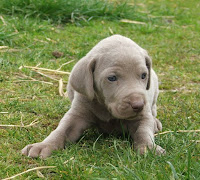 The little fella in the picture is a Weimaraner puppy. Now, to put this into context, I have no dogs in my house and I have no intention of getting one. But, yes, I was researching the care and feeding of said dog. I know they are cute little things with paws which are far too big for their bodies. Haling from Germany they were originally bred to kill deer, wolves, and bears. However, despite still occasionally being used as hunting dogs, they are mainly just soppy family pets. They're particularly soppy as they like to be very close at hand. This gives them their other name of silver shadow. 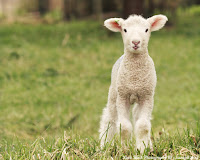 Yes, you're right, Lambs did feature in my research. I, and probably many other people, thought that lambs were born in spring. We see them gambolling in the fields and it reminds us that the weather has changed and spring is on its way. Lambing at this time is called early lambing. Then we have late lambing in April/May. Fall lambing can happen September - November.

So as you an see researching crime novels can take a lot of surprising turns. Why am I doing research on animals when my genre is crime. Well that's for me to know and you to find out in future books. All I will say is, no animals were killed in the writing of this blog, or any book I write. Bosses, however are fair game for anyone. If you go to my website you will be able to download a free DI Shona McKenzie Mystery, DI Shoan McKenzie's Guide to Killing Your Boss.