By Leverett Butts - March 23, 2016
Last month it took me far too long to discuss metafiction, though I must admit that I'm now halfway wishing they'd reboot Moonlighting.

They're doing it for The X-Files and Twin Peaks, why not Moonlighting?

Anyway, let's start right in on the countdown, shall we? 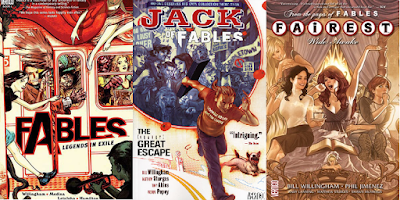 This title is a shoo-in for this list. It's very premise about metafiction: Characters from fairy tales, fables, children's literature, and other folklore are  literally aware that they are characters in stories. They have moved into our "mundane" world as refugees from a murderous tyrant, known only as the Adversary, who has conquered each of their worlds (each of which is part of a loose conglomeration of fictional universes called The Homelands). These refugees, who call themselves Fables, now live in either Fabletown, located in a secret building in Manhattan or, if they are unable to take human shape, on land in upstate New York appropriately named the Animal Farm.

From the beginning, then, Willingham's genius lays in his understanding of what his audience already knows (or doesn't know) about his characters. He then toys with these expectations as he draws out his plot.
The Big Bad Wolf, for example, has taken human form and become Fabletown's sheriff, in a nod to Walt Disney's Sheriff of Nottingham (because who better to sniff out wrongdoers, than a wolf?). However, Bigby (as he is called) is not the antogonist of the story, but the protagonist. Throughout the series, he makes it plain that his actions in the Homelands were not done through "evil' but through his wolfish nature. It is now his nature to protect his pack, his former erstwhile victims, from the greater danger of the Adversary.

However, it is one of Fables' several spin-offs that is particularly appropriate for this countdown. About a quarter of the way into the Fables run, Jack (of the Beanstalk, the Nimble, and the Giant-Killer), an ineffectual con-man, leaves for Hollywood to make a film about himself (and to have his own comic where he can be the hero).

It doesn't take too long before he finds himself captured and imprisoned in the Golden Boughs Retirement Village, a retirement home for Fables run by Mr. Revise and the Page Sisters, who call themselves Literals and are the exact opposite of Fables. Here the staff has made it their goal to keep Fables out of the public eye until they are forgotten and their stories fade to memory and disappear completely. Willingham then populates the Village with literary characters who are in reality all but forgotten (such as Little Black Sambo, Cú Chulainn, and Winken, Blinken, & Nod) or who are increasingly unknown by his younger readers (the Cowardly Lion, Tin Man, and Babe the Blue Ox).


During Jack's imprisonment, Willingham uses the storyline to examine not only how folklore develops, but how it is forgotten. After Jack escapes with his friends (including Revise's grandfather, Gary the Pathetic Fallacy), he then journeys through almost all literary genres starting with the Travelogue and moving through fantasy, mythology, and science fiction before his spin-off comes to a close.

Jack of Fables, though, only does obliquely what Fables and its other spinoff Fairest do more subtly. All in all, Willingham's comics do more than spin an entertaining yarn about our childhood literary characters all grown up. They examine how folklore remains vibrant and alive, and by using so many near-forgotten characters, Willingham does what he can to preserve this folklore in a more vibrant way than, say, the Brothers Grimm, Charles Perrault, or all the other folklorists that have come before.
Big Bad Wolf Bill WIllingham children's literature fables Fairest fairy tales folklore Jack of Fables metafiction