Opera and Me - Umberto Tosi

When I was five years old, my aunt Nina dressed me in a little blue suit and took me to a New England Conservatory of Music production of Giuseppe Verdi's Rigoletto at Jordan Hall in Boston with my mother in the role of Gilda. Being as this was my first live opera, my aunt sat us unobtrusively in the last row of a side balcony, with an exit handy in case I didn't last.

Before each act, she explained the story of the opera, based on a Victor Hugo play, as best she could in terms I could understand, censoring the racy parts about Duke of Mantua's womanizing. Just before the third act, she sketched out the tragic conclusion in which Gilda is murdered by an assassin – Sparafucile – who had been hired by her doting father, the hunchback jester Rigoletto himself, to kill the Duke. Gilda is stabbed by Sparafucile as she enters an inn by night trying to save the Duke, whom she loves despite his perfidiousness.


As we settled into our seats, I whispered a question to my aunt: “Does he really stab her?”

She whispered back, waving a finger: “Yes, just like I told you. The assassin puts her body in a sack and gives it to Rigoletto.” Aunt Nina pantomimed as she whispered. “He opens the sack and discovers his dying daughter instead of the Duke. It's very dramatic. Now hush. It's about to start.”

The curtain rose and the act unfolded with the sublime quartet – “Bella Figlia dell'Amore.” Soon a cloaked and hooded Gilda approached the entrance to the inn.

Just before the fated moment, however, I jumped out of my seat and ran to the balcony railing screaming: “Mommy! Mommy! Don't go in there, he's got a knife! He's gonna kill you!”

I remember my mother's pale, mystified face looking up and out from her black velvet hood and fixing me wide-eyed just as my horrified aunt snatched me up, kicking and yelling, and carried me from the hall. I recall that particular moment clearly – and there was no forgetting the rest, because my mother and aunt relished telling the whole story every chance they got as I winced well into my teens.

As you've guessed by now I was an opera brat. In fact, I wouldn't even be here if not for opera. Starting at age 12, my mother – then Alba Alessandrini – had been the prize pupil of Luisa Ardizzoni Tosi, a then-renowned early twentieth-century diva with many recordings, who, by the 1930s had become one of New England's most respected vocal teachers. My mother met and, by age 18, married one of Madame Tosi's tall, strapping sons, Renzo – most likely in haste – and had me.

I had no urge to sing, but by the time I was four, I could pick out tunes on my grandmother Luisa's Steinway baby grand. I fancied myself growing up to be a conductor like Arturo Toscanini, whose NBC Symphony broadcasts we heard often on the radio. He was a hero, not only as a musical genius, but as an Italian cultural icon who had stood up to Mussolini and gotten his head cracked by Fascist thugs before leaving Italy in 1931, something made present ever time I watch the news and see Donald Trump rousing ugly crowds against dissenters and the press in their midst.

But a musician's life was not in my stars. My father thought it impractical for a young man, and urged a business career. He gave me a second-hand Smith-Corona typewriter instead of the upright piano that my mother asked. I set to pounding a different keyboard, but to a different drummer nonetheless. Taking equally impractical path I became a writer instead of a musician – or as close to what I could imagine defines one. I'm still trying to figure that out.

Fast forward to 2016. I found myself up against another yet deadline writing this post – familiar territory after so many decades sweating over Qwerty keyboards. February 29, Leap Day, a scant 48 hours from post time and I hadn't a clue what to write for this March 3 turn. My mind an intoxicated grasshopper, I mused about Leap Day – a creative achievement that keeps our Gregorian calendar on course with minimal wobble, considering that earth's daily rotation doesn't fit well with its revolutions around old Sol. Talk about creativity! Talk about miracles! Pope Gregory XIII– nee Ugo Boncompagni – manifested a brand new day out of thin air when he introduced his new calendar in 1582, and we've gone along with it every four years ever since.

It's also Gioachino Rossini's birthday – composer of 39 operas, gourmand, cook and bon vivant – to whom I can definitely relate (even though I'd rather be more like Verdi, because the older he got, the better he got.) Fitting that a composer known for his great wit should have picked such a hide-and-seek birthday. I loved the Barber of Seville as a kid – and not just because I'd seen my mother singing the role of Rosina. I didn't understand its commedia dell'arte derivation at the time, or its characters' gyrations in pursuit of love, but Rossini kept me laughing and I begged to hear it over and over on our old Victrola. I virtually memorized the Italian libretto. It was a short step and a giant epiphany to go from Rossini's lively Barber to Mozart's divine Marriage of Figaro. But that came a little later. When I would hear the Lone Ranger theme on the radio, it not only conjured the masked hero, but summers picnicking at the  Hatch Memorial Shell by the Charles River with Arthur Fiedler conducing the Boston Pops Orchestra in Rossini's William Tell Overture. 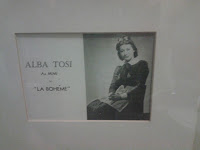 Yes, growing up with divas made me a weird kid. But opera also proved my portal to all the arts, particularly to literature, theater, Greek tragedy, history, mythology, philosophy and even psychology – the great novelists of three centuries whose works have been both influenced by and adapted for the musical stage. As my musical experiences widened and deepened, so did my knowledge of the aesthetic and historic roots of all that melodramatic musical theater – of Wagner's Norse mythology and Verdi's love of Shakespeare, of Mozart, Schubert and Beethoven's Vienna, Debussy's Paris, Bach's connection to Fredrick the Great and the mathematical mysteries of his fugues, to America, Gershwin and jazz and Scott Joplin's opera Treemonisha, straight to contemporary operatic explorations like John Adams' electrifying “Nixon in China” and “Oppenheimer.”

There's been no getting away from opera. A dear friend, MarshaCoupé from California days – an American expatriate living in the UK, has often told me that my life “is like grand opera.” It makes me smile and shudder at the same time, remembering the ups and downs of four marriages and several career tracks. I like to think of it as less so in these serene days of dotage and creative bliss with my inamorata, artist Eleanor Spiess-Ferris. All I can say, is I'm with Duke Orsino. If music be the food of love, play on!
------------------------------------------------

Umberto Tosi is author of Ophelia Rising, Milagro on 34th Street and Our Own Kind. His short stories have been published in Catamaran Literary Reader and Chicago Quarterly Review, where he is a contributing editor.
He studied improvisational theater and played onstage with three groups in Northern California, where he was editor of San Francisco magazines and wrote extensively for newspapers and periodicals nationally.
Posted by Umberto Tosi at 00:00

How I envy you that early introduction to opera, Umberto! I came from a family who - put off, perhaps, by its entirely false reputation as an elitist art form - shunned opera. I was well into my late teens by the time I discovered it for myself - and by then, luckily, I was living in a city with a thriving opera company. But having an opera singer as a mother - now that is amazing!

What an amazing life you've had Umberto! it must have been very traumatic for you at only five to see your mother about to be stabbed, it's a wonder it didn't put you off opera for life!

B R A V I S S I M O Umberto!
Your life is an opera, my darling. How could it not be with your talent and lusty appetite for music, literature, art, food, and dare we say divas. Love the story of your first opera. What a wonderful legacy your mother and grandmother gave you. I want to be a woman who adores opera - but in truth it's always best when enjoyed with you.

Wonderful first opera story, Umberto! I had a similar but non traumatic introduction, when my opera loving mother let me go to the lavatory on my own in the Kings Theatre in Portsmouth when I was (I guess) six or seven. It was in the middle of an act and she couldn't bear to leave her seat.

Anyone who knows me is aware of my amazing facility for getting lost (I'm still a world champion), and I ended up wandering aimlessly round the back corridors, not the slightest bit abashed. Unlike my mother, who at the interval saw me on the stage with an official, who looked into the audience and asked if anyone had lost a brat. For me, it made opera even more exciting and exotic.

Jan - now that's the way to enjoy an opera! You're always an original.

Umberto - thanks for another great post. May you continue to enjoy life operatically.

Wonderful post, Umberto! My mother (half Italian) was a lovely amateur singer, as was her aunt and I was brought up with opera on old 78s with a wind-up gramophone. My parents were big fans of Jussi Bjorling but my Italian grandfather loved Gigli. Like you, I loved the stories as well as the music and maybe that's part of the reason I'm a writer. Opera has it all - the drama, the music, the story, the visuals - the ultimate art-form!

What a great post, Umberto. And what a story! While you were leading the heady life of the young 'opera brat'with Verdi and Rossini, I was singing Strephon in Gilbert and Sullivan's Iolanthe at school. Quite a cultural difference. But then, at that age I knew no better. Oddly, while opera led you into literature, theatre, Greek tragedy and the rest, mine was the reverse procedure - they led me to opera, which has become a habitual love relatively recently

I think i always hear Gioachino Rossini's musical background in some cartoon flicks.


I found the best Indiana Puppies for Sale

I am so honored to have sat with you and your mother watching operas in San Francisco!! Yes -- your life has been a beautiful opera and one that I am so glad that I have gotten to watch for the last 20 odd years. Blessings!