Travelling to the Edge of the World - Finally! by Kathleen Jones

By Kathleen Jones - March 05, 2016
As I write this, it’s minus 2̊ C below and snowing outside.  If you live in the north of England, it’s been a long, soggy winter and it’s been hard not to get depressed.  Particularly as the aftermaths of flood and flu have brought work-in-progress almost to a standstill.  I’d hoped to have my Haida Gwaii book out before Christmas - originally to coincide with the Paris Climate Change conference [COP21] - without realising that Nature had other ideas. 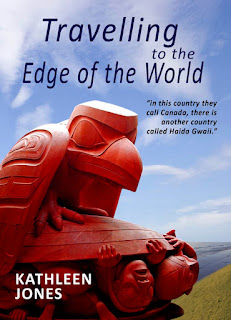 But this week the book is finally complete, with illustrations, fancy chapter headings and inter-active reference notes, all put together by my in-house book designer and editor at The Book Mill, Neil Ferber.  There have been a few hiccups - having an editor who is also a life partner can be tricky at times!  Suddenly realising that you’ve got to alter chapter 3 at the very last minute because you’d forgotten something doesn’t go down well. And it can be a delicate matter communicating the fact that you don’t like the cover they’ve just spent hours slaving over. Anyone who has experienced a Life/Work partnership will know what I mean!
Last night Travelling to the Edge of the World was finally loaded up to Amazon KDP as the first step in a complex publishing process.  As Neil and I are on opposite sides of Europe we did it using Skype.  When you connect via Skype you have the option of sharing computer screens with the other person, so although I was the one logged on to Amazon, Neil could read the pages and talk me through the process of tagging and uploading.  That way I could choose my own publishing categories for the book (travel and history)  and we could decide jointly on pricing. We've decided that, during the month before the paperback comes out, we're offering the book at a discount - £2.99. This may seem rather high, but for books with illustrations Amazon charge quite a lot more for downloading - and then there's the VAT.  Pricing has become increasingly tricky.
Many people have asked me why I’ve chosen to publish this title with a tiny ‘boutique’ publisher, since the book is very commercial and currently topical.  And they are exactly the reasons why.  If I had simply sent the book to my agent, by the time she’d secured a publishing contract and the publishing house had fed it into their system, the book would have been completely out of date.  It takes about 6 months for an agent to read and respond to a manuscript, another 6 months for it to be sent out to publishers and get a response, and there’s currently a 9-12 month lead in for publication after signing the contract.  That means the whole process can take 2 years!  So I’m putting this book out there via our own publishing company (we publish 4 other authors).
Neil is currently working on the paperback design, which is slightly more complicated than the ebook because this title has so many illustrations.  It’s essential to make sure that you don’t have a separation of text and photo with big white gaps, but this makes formatting difficult.  In the ebook, there’s a way (see Guido Henkel’s Zen of Ebook Formatting) of locking pics onto the relevant text and making them vary in size depending on the size of text selected by the Kindle reader.  If you’re into advanced ebook creation then Guido Henkel is your man.  If, like me, you favour a slightly easier approach, then how to Self-Publish Your Book by Jessica Bell (part of her “Writing in a Nutshell” series)  is probably all you need. For the paperback, Neil uses InDesign’s professional edition and it looks like hell on a computer screen - my creative mind goes fuzzy just looking at it! But using InDesign means that the finished result should look exactly the way you’d imagined it, wherever and however it’s printed.
We’re hoping that the Create Space edition will be available at the end of March.  In the meantime we’re also going to be trialing Ingram Spark for worldwide sales on all other platforms including the i-store. Ingram do marketing and distribution for the big corporate publishers, but they were very quick to realise the power of independent publishing right at the beginning of the self-publishing revolution.  Their Spark offshoot has enabled self-publishers to use all the expertise available to the Big 5. They charge roughly the same as Amazon for marketing your work, so you still pocket the biggest share of the cover price and they seem to achieve better results than SmashWords.  We visited their stand at last year’s London Book Fair and talked to their representatives and were very impressed by their expertise and the range of options they offered, including E-libraries in the USA.  Ingram Spark are also recommended by the Alliance of Independent Authors.  I will report back on the experience once I’ve seen how it works for me.
The official launch of Travelling to the Edge of the World won't be until the beginning of April and I'm planning a small party in a local bistro with a few glasses of prosecco thrown in.  Everyone's invited, virtually and actually!  It will be almost a year since I set off on a journey of discovery to the furthest reaches of British Columbia - a journey that has changed my life.

Find out more on Kathleen's own Blog A Writer's Life