When I was a lad, DA stood for District Attorney on US TV shows and Duck’s Arse in barber shops. (For younger readers, I should explain that a DA was the back bit of a Tony Curtis, where the hair was swept back on each side to meet in the middle of your occiput.) 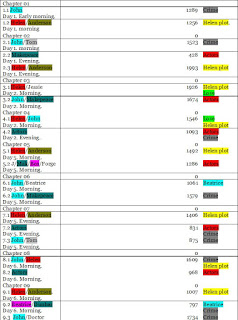 The reason I’m telling you all this is that the illustration represents my latest displacement activity (which I’ll now call DA to save time). We all have DAs, but the essence of a really good one is that it pretends not to be. It gives you the impression that you’re not wasting time but actually working. The best ones even manage to go a bit further – with them, you’re not only working, you’re working on whatever it is the DA is helping you to avoid.

In this instance, not only have I spent a pleasant half hour creating the table represented here, I’m now spending more time explaining it to some imagined readers, which is a sort of ne plus ultra DA in that it’s not only a DA itself, it also has another DA as its subject matter. Result!

Anyway, what you see is a table of progress on my WIP. I felt that there was some unevenness in the various chapters and parts I’d written so I decided to list them, along with the characters appearing in them, the word count of each, a summary of what happened and a one word label for the specific theme to which they related. This is the first time I’ve used Scrivener to write a novel, so the collation of material was easier than it would have been when I used to write it all in Word.

When I’d done all that, I was faced with the prospect of getting back to the novel and writing another chunk but then I had the idea of highlighting the various characters and themes using different colours. It would give me an instantaneous picture of my overall progress and reveal which elements were being short-changed and needed to be revisited (which is a lovely mixed metaphor, unless you’re a dodgy bailiff in which case it’s a job description).

I’ve managed to extend the displacement period a little by experimenting with ways to display the whole table (of which only part is reproduced here), on a single screen – so far without success. I may have to resort to printing it out and sellotaping the bits together to create a single chart, which would extend the DA by maybe another 15 minutes or so.

(By the way, the wide space between the coloured columns is in reality occupied by the scene summaries but I deleted them for the purposes of this blog in case you read them, decided the story was rubbish and wondered why I didn’t just go and get a real job.)

And now, this blog has added another 500+ words to my daily output so, after a little more tweaking of the chart and some brief notes on the next scene to be written, it’ll soon be time to turn all this off and have a glass of wine.

Quite a productive day, really.

Chris Longmuir said…
Pleased to see you're getting to grips with Scrivener, and I hit the same problem with my current book, the main character was getting elbowed out of the way by the minor characters and subplots. Scrivener's ability to highlight this with different colours is a boon and helped me get a better balance in the book. My book is now out of Scrivener and I'm doing the revision, rewrites and edits in Word.
7 June 2016 at 09:24

Ann Turnbull said…
I love this! Really serious DA! I'm planning a re-write, and I'd allocated myself a two day writing retreat while my husband is away - so I spent all my writing time yesterday doing something similar to your Scrivener plan, but with the aid of post-its, paper clips and cryptic handwritten notes. So now it's all sorted. And I can begin, can't I? When I've had a cup of tea and done a bit of tidying up, and - oops, here I am looking at blogs...
7 June 2016 at 10:14

Susan Price said…
Truly inventive DAing, Bill. You are a credit to Authors Electric.
Anybody can go and go the gardening or washing up instead of writing - but to come up with a DA that has every appearance of writing - that's true DAing talent.
7 June 2016 at 10:21

Lydia Bennet said…
I've never used Scrivener but now will consider it if the likes of you and Chris speak well of it. I have loads of DAs to the point where I need some new DAs to escape from them.
7 June 2016 at 17:23

Bill Kirton said…
Thanks, all.

Chris, I remember you talking/writing about Scrivener ages ago. I know I’m only using a fraction of the things it offers but it’s been a revelation with this one. The ease of finding things, checking back, getting rid of repetitious material, its general organisational tools – it’s a godsend. Like you, though, I’ll be doing the final edit in Word.

Ann and Reb, you too are clearly gifted when it comes to DAs. I don’t think I could use your post-its and notes method, though. Mine would be impenetrably cryptic.

Susan, if it’s not too ‘Oooh Matron’-ish, thanks for the endorsement of my credentials.

Jan, you’re so outrageously old-fashioned. I bet you even wear a smoking jacket when you write.

Lydia, it took me a while to commit to it but I don’t regret it in the least. Maybe a book on DAs would sell well to writers.

Umberto Tosi said…
Works for me. Thank you, Bill, for a fun DA spent reading this and organizing my time-wasting productively. You have hit upon one of the strange loops of writing - a protean literary paradox. Nobody really knows how writing works for sure. This gives us something to do while the process proceeds.
8 June 2016 at 16:57

Catherine Czerkawska said…
Looked at Scrivener, but it's not for me and I'm pretty sure never will be. I just don't work that way. I do a lot of rewrites though, and various printouts that I work on. Once I have a printout I can see and feel where the balance is wrong and address any problems. I would have no idea what the theme of each chapter is. People sometimes tell me what it is once I've finished the book! I do wonder, though, if it's different for crime fiction and think I might find it more useful in that case.
9 June 2016 at 11:54

Bill Kirton said…
I agree about printouts, Catherine. It's easier to get to grips with the seemingly 'fixed' nature of the printed word. You may be right about the crime novel thing - I always need to go back and check whether a certain 'clue' has already been set, etc., and it's the instant accessibility and findability of references and characters that save so much time.
9 June 2016 at 16:09