Again With The Covers... by Susan Price

Announcement: The Sterkarm Handshake is on offer at $1-99 all day on the 24/06/18 at Early Bird Books. Since the US is some hours ahead of us, there might still be time to grab a copy.


Meanwhile, on I go with the work of publishing my back-list.

ElfKing would have been out sooner if I could have tracked down a better image for the cover.

I tried using another wikimedia image from the Sutton Hoo hoard... the famous 'man between wolves' from the purse-lid. The original is infilled with scarlet enamel and some think it represents the god Odin (who is a character in ElfKing.) 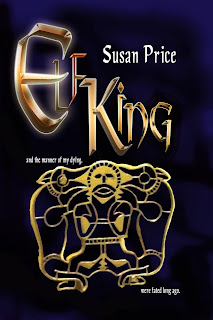 Besides, my brother said the man 'had a silly face.'

So I used another image, one taken from a helmet plate. The book contains a couple of characters who are almost a Norse version of the Greek 'Heavenly Twins.' (There are some hints that Norse Myth did once have twin brother gods, a little like the Gemini or Dioskouri.) 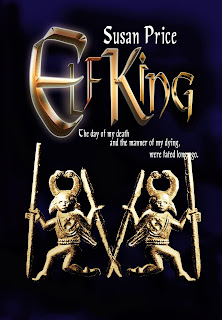 This works a little better as a design, I think but although the prancing warriors are authentically Viking Age, they are, well, a bit silly.

Just a bit. With their chubby little legs.

I decided I just had to get a cover done and stop messing about with PhotoShop. So I decided on a sword.

As my colleague and friend Katherine Roberts remarked a couple of days ago, a sword isn't a very original image for a fantasy cover. But it says, clearly, 'This is a book with sword-fighting in it. And if you like books with sword-fighting, you might like this.'

Sometimes, you just have to get on with stuff. 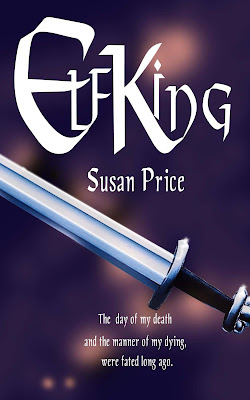 After all the work I put into the gold lettering, I decided that the plain white lettering looked much better. So much so, that I went back and made the lettering on Elfgift plain white too.

The slogan on the front of the book, says, 'The day of my death and the manner of my dying were fated long ago.' This isn't really mine. It's a deliberate misquote from the Norse Myths. The god Freyr sends his servant, Skirnir, on a dangerous mission into Giant's Home, to demand the beautiful giantess, Gerd, in marriage. Asked if he isn't afraid to make such a journey, Skirnir replies, why should he be? The length of his life and the day of his death were fated long ago. If he's fated to die in Giant's Home, he will. If not, not. His being afraid won't make any difference to Fate.

(I used the first part of Skirnir's reply in Ghost Drum. Skirnir says: 'Fearlessness is better than faint-heart for any man who puts his nose out of doors.' In Ghost Drum it became, after various rewrites, it bcame the homelier, 'Whenever you poke your nose round the door, pack courage and leave fear at home.'

The Norse Myths have been a constant inspiration for me. I don't know if I would even have become a writer if I hadn't collided with them at eleven.)

Oh well. The next task is to get the books up as Kindles. If I can remember how.

Starting from today, you can buy the ebook of Elfgift for 99p.
Then the price will rise to £1-99 for a few more days, before returning to its usual price. 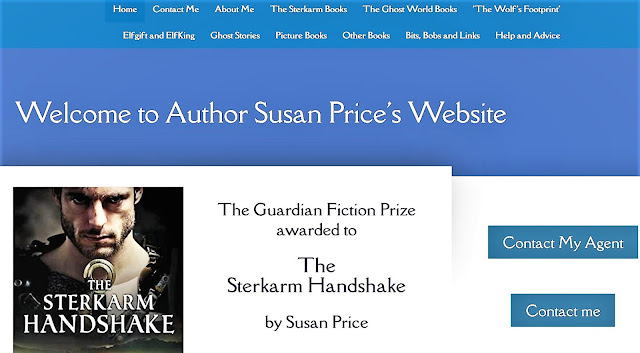 julia jones said…
"Sometimes you just have to get on with stuff" - such wise words. Both sets of lettering looked good to me but I think that clear -- "stark", even -- is almost always likely to suit your style best. Glad you found the Norse myths when you did. For me it was British fairy tales (Amabel Williams-Ellis) which I found puzzling because so unglam. Stayed with me though.Lettering on those should probably be woven rushes
25 June 2018 at 08:02

Katherine Roberts said…
Swords are always good for fantasy... and not being too original seems to work for covers. They need to give readers visual clues as to the content.

Mind you, I quite like those prancing warriors, too... but I know exactly what you mean. Sometimes you just have to get on with stuff! I love your title treatments.
25 June 2018 at 21:32