Lev Butts Lists the Best of Self-Publishing I

Most people assume that if a book is self-published, it is because the work was not good enough to be picked up by a traditional or indie publisher. There are a few reasons, however, that a perfectly good book doesn't find a publisher:

None of these reasons necessarily imply a lack of quality in the writing. In fact, I have found while researching this series of posts, roughly the same amount or more of good self-published writing as traditionally published, and I literally went in expecting to find a fair number of good books in a sea of bad.

The biggest problem good self-publishing has is one of promotion: Most self-published authors don't have the budget for ads nor the clout to get professional reviews. In other words, most of us don't know about the good stuff, so it shrivels on the vine.

Well, I'm here to do my part in helping good self-published work find an audience. This won't be a countdown in the traditional sense because that implies an increasing or decreasing quality, and I am uncomfortable doing that to a field that already has so many strikes against it. I'm simply providing a list in no particular order of self-published books I've run across that are genuinely good.

You may notice an overabundance of fantasy in my list, but that is due more to my methods of finding books, which I will discuss next month.

In the meanwhile, lets look at a good book, shall we?

1. Fields of Gold: The Orchid and the Rose by Jim Stephens 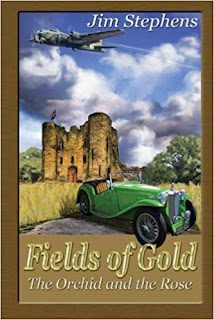 I'm a sucker for coming of age stories and good World War II dramas (one of my favorite WWII stories is Herman Wouks' duology The Winds of War and War and Remembrance). Jim Stephens' Fields of Gold: The Orchid and the Rose is both, and it is really well done.

The novel tells the story of Matt Weldon, a spoiled and arrogant young American who finds himself in London on the eve of war. He very soon falls for a mysterious woman he meets at a party. Shortly after this, he must decide between her and the girl from his past as the forces of history sweep them in its wake. This dilemma, played against the backdrop of the world at war, forces Matt to mature in ways he never expected, to learn the value of hard decisions, and to appreciate the effects such decisions have not only on himself, but others.

Is the story perfect? Of course not; few books are. There are places that might use a bit more editing: words that need consistent spelling, sections that tend to retell the same stories, and incidents that may seem unnecessarily gratuitous. But this, for the most part, is a matter of opinion. I found most of the scenes other reviewers deemed gratuitous to be effective attempts to establish historical touchstones, thematic parallels, or effective ambiance. Most of the retold stories are slightly different versions from other points of view, so that we generally get a new interpretation of the events on subsequent retellings.

For me, the novel has two major aspects for recommending it: Stephens is adept in his historical research, and it shows in his ability to weave a fictional story around the historical details of the 1930's and 40's. Secondly, he experiments with his points of view: some sections are told in third person, others in first, and others through letters exchanged between the main characters. (Anyone who has read my work knows I am particularly interested in how a story is told as much if not more than what the story actually is, so I appreciate a good point of view shift).

Fields of Gold: The Orchid and the Rose is available in paperback and eBook here.
Fields of Gold Jim Stephens self-publishing

Chris Longmuir said…
I agree with you that there are many self-published and indie books that are the equal of their traditionally published counterparts. Several years ago I was appointed crime writer in residence for the online Edinburgh Indie Book Festival, not the one that meets in Edinburgh every August but its online counterpart. I read 95 indie/self-published books over that summer to meet the requirements of a daily blog and only discarded 4 out of the 95 as being below the standard I was looking for which meant 91 of those books measured up to their traditionally published counterparts. At the end of the festival, I published a book with my assessment of those 91 books. It was a fascinating experiment.
23 June 2018 at 08:23

Fran B said…
I find you are more likely get a wider range and more edgy, experimental stuff in the Indie marketplace. The big publishers especially got for a safe sell and - let's face it - some of the prolific, famous authors can become a tad pot-boiling after a bit. You sometimes get the feeling they could write their weekly shopping list and it would be trumpeted a 'the latest blockbuster from...'