As Captain Jack Sparrow says in Pirates of the Caribbean, ‘It’s a funny old world, innit?’

And isn’t it strange how much can change in just a couple of weeks? After all my worries and fears charted in last months’ blog – about readers’ expectation of that tricky second novel, of whether I’d finish everything I needed to in good time for publication day, whether I’d manage to have any sort of launch – everything seemed somehow to come together. Very suddenly. Or, perhaps I should say, just in time, despite my tendency to do everything at the last minute (...like this blog. Less than 12 hours until I’m due to post it. But it has been a busy week – or three.)

To backtrack... My second children’s novel, The King’s Man, was due to be launched on 26th May – a date chosen for one very good, and another less sensible, reason. The former – because it was the Saturday at the start of the UK spring bank holiday weekend, and therefore the school half-term holiday throughout the country. This would mean that, if any of my big ideas for a launch came to fruition, it would be a good time to stage an event that children could attend. The latter – well, it’s a personally significant date for two reasons (one family-related, the other football-related), and I thought it would be nice to add a third!

A week before and I was all set for publication: the button was pressed for ebook preordering on Amazon, all paperback proofs had been received and approved, a bulk order made for sending out review copies and for private sales. And that was when I realized – I didn’t actually have a launch arranged. My big ideas hadn’t come about, of course – and I didn’t have any small ideas for back up.

Cue the start of panicked arrangements for a virtual launch.

‘Panicked’ particularly because, though I’d heard of such things, I’d never actually attended a virtual launch, let alone arranged one – and frankly I had no idea where to start! And it’s at times like that that you discover just what a fantastic, collaborative bunch of people authors are.

I created an event on Facebook at only a few days’ notice and asked a few fellow writers for advice. And before long, not only did I have plenty of ideas for how to run the event, I had four (yes, four!) guest authors lined up to take a slot (and also take some of the pressure off me). As a result, I extended the time from the original two hours to three – and on the day, the time passed so quickly and the discussions were so lively that it seemed not nearly long enough. Although it has to be said I was more than ready to crack open that waiting bottle of bubbly as the event drew to a close... 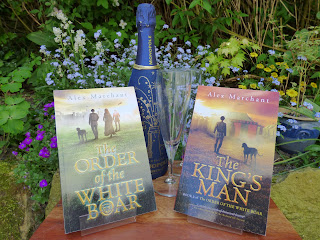 The event guests – of whom there were around 50 – also seemed to enjoy themselves, being very complimentary and very much getting into the swing of things – entering competitions, posting questions, entering into lively debates about my characters (mainly King Richard III of course). One had even already read the ebook (16 hours after publication) and offered up my first review. Another (one of my fellow authors) even put together a fantastic video for The King's Man (https://onedrive.live.com/?authkey=%21AMsySH0rQRDRTgY&cid=D2B4571C552D0578&id=D2B4571C552D0578%2114603&parId=D2B4571C552D0578%2114602&o=OneUp)

And my worries about how the book would be received were soon laid to rest. All the reviews on Amazon are five star to date, with my favourite headline so far being ‘A brilliant, gripping, heart-wrenching sequel!’ Reviewers acknowledge that it’s a very different book to the first, but seem to ‘get’ what I’ve tried to do.

Oh, and then, three days before my virtual launch, what should happen? Only the sudden, unexpected flowering of one of my 'big ideas'. An email arrived from the King Richard III Visitor Centre in Leicester - where King Richard was buried for more than 500 years and where his grave was rediscovered in 2012. Apologizing for the late reply, it asked whether I was still interested in launching the book there. And would the second weekend of the school holiday be OK – to give a little more time for publicity? What do you think was my reply? 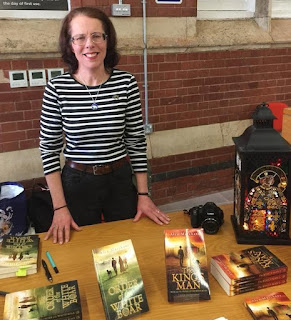 And the icing on the cake? They invited Pilgrim the Peregrine along too! 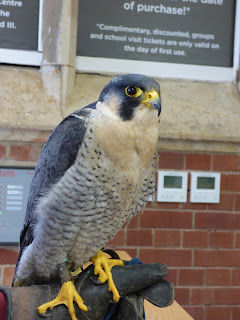 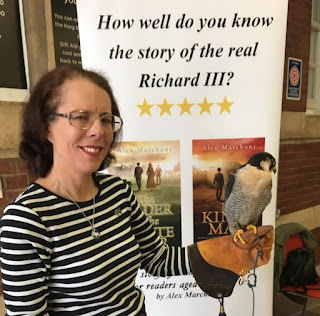 Griselda Heppel said…
Congratulations! Sounds as if your virtual launch went swimmingly, and being invited to hold a second launch at the Richard III visitor centre in Leicester is a real coup. Hope it all goes well. I trust they’ll provide the odd vat or two of Malmsey... :0)
15 June 2018 at 15:44

Alex Marchant said…
Many thanks Griselda. It's turning out rather a rollercoaster, lots of things outside my comfort zone, but all good fun :)
27 June 2018 at 11:28