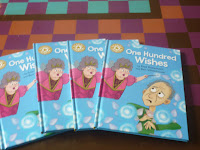 And so he's finally out there - my miserable and reclusive Stan who is actually extremely lonely and longing for human contact, along with his decidedly acerbic fairy godmother who's seemingly stuck with the job of giving him his "ONE HUNDRED WISHES." It's always lovely to see new books, and Franklin Watts production standards are very high, so however small the story, it's always satisfying to see the results. 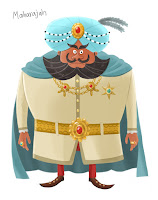 Next to come, in July, will be "MORE", an Indian variation on the story of the magic bowl which keeps re-filling for as long as its owner stays polite and grateful, which, of course, the guy who steals it won't, as he NEVER says thank you, and regards the bowl's never-ending bounty as his privileged right. Here he is on the left, fat and pompous, and all ready to grab your very last crumb. His small daughter's quite different, though, and may one day change everything, because hey! Girls are powerful, especially little ones.

I am at present on the horns of a dilemma, but before writing that, I needed to check its origin. No idea whether this is correct since I found it by Googling, but it seems that a 'lemma' is a difficult choice, such as 'shall I buy a strawberry or a chocolate ice cream?' so two lemmas together represent two difficult choices coming together, like ' should I be buying ice cream at all since I'm on a diet', making it a double lemma, or a 'dilemma'. And what could be more painful than bouncing on a beast with two sharp horns (and most horned animals have a pair, with the exception of the unicorn which you're only likely to encounter if you're are in a state of virginity.) My first 'lemma' is that I need some serious but not life-threatening ankle surgery, with a lengthy recovery period. Ouch! I've been putting off that one for ages, but suddenly it can't be ignored. The second 'lemma' is how do I get care for the first few weeks? Ouch! Anyone feel like sharing my quiet London house and garden in exchange for light shopping, cooking and making sure I don't break my neck while walking on crutches is more than welcome to apply.

Bookwise, I've recently gone back to J S Byatt, and re-reading "THE MATISSE STORIES". One, "Medusa's Ankles', was made into a short film shown on BBC TV not long ago, and I was fascinated to see how the film-makers had adapted the story, especially as I'm currently in the process of having one of my books made into a movie (my lips have to be sealed with super-glue on that one!) I was also interested to learn that A S Byatt has an art school background, as I do, too. A useful writing exercise might be turning your work in progress into a storyboard and 'seeing' the action frame by frame.

Umberto Tosi said…
Congratulations on the release of "One Hundred Wishes." It looks and sounds wonderful. Here's to smooth solutions to your lemmas and a speedy and well-tended recovery from your ankle surgery.
28 June 2018 at 22:29