An Inca Mystery: how did they manage without writing things down? wonders Griselda Heppel


Recently I’ve found myself wondering: Why did we start to write? I don’t mean, what made you or me want to write books/plays/poems/utter drivel – but the writing itself. What drove people to invent a system of setting words down for others to read?

It can’t be just to transmit knowledge. Plenty of ancient cultures did this perfectly well by word of mouth; aborigines in Australia built up a wealth of learning vital to survival which they passed down through generations in this way, from the medicinal properties of plants to hunting techniques to how to find water. Wall paintings in the Northern Territories show how they used storytelling: wallabies and snakes interweave with figures holding weapons or performing rites. A kind of writing, perhaps – and not. When the pictures tell the story, you don’t need words. 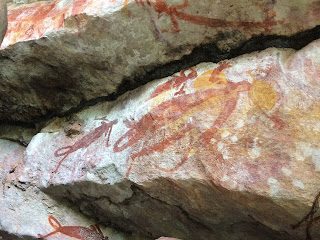 So what did make writing necessary? According to my anthropologist husband, the need to record information: inventories, instructions, household accounts. A settled society sets up agricultural systems and industries; crops are planted, harvested, stored and distributed, houses are built and furnished with textiles and other goods, trading with other communities is established - and all these activities are hard to keep on top of without some means of recording information permanently. The fact that the first instance of writing - emerging from the Sumerians in Mesopotamia, around 3500 BC - was to facilitate trading over long distances, supports this theory, and arguably any other society reaching this level of complexity should follow suit.

But it doesn't always work that way.

The anthropologist and I are just back from a trip to Peru. We explored agricultural terraces and spectacular temples built from finely dressed, massive blocks of stone. We walked the streets of Cusco where the lower walls of buildings long predate the Conquistadors. We climbed 600m up a steep path, hewn from rock, to join the last part of the Inca Trail, reached the Sun Gate and looked down on the exquisite ruins of Machu Picchu. And the more we found out about the Incas, the more baffled we became about one particular aspect of their culture: how did they achieve such heights of architecture, engineering and mathematics, astronomy and agriculture, without any kind of written language?

No trace of Inca script has ever been discovered. Even a memoir published in 1609, Comentarios Reales de los Incas by Garcilaso de la Vega, son of a Conquistador and an Inca princess, makes no mention of writing, though he describes many aspects of indigenous life.

So how, for example, does a society that develops sophisticated food-drying techniques – allowing potatoes and maize to be stored for up to 20 years – keep track of the process over that length of time? Surely labels would be needed for each individual crop product, its provenance, quantity, age and state of preservation (use-by date, if you like!).

Well, it seems that they did use labels. Or rather, a system of knots, tied in different coloured pieces of rope, called a Khipu in Quechuan.
What to the Spanish invaders would have seemed worthless decorations contained all kinds of knowledge to the Andeans who knew how to read them.

I can see how knots could represent periods of time or quantities, with the rope colour itself, perhaps, standing for the individual foodstuffs; but storage records at least remain fairly static. What when the information becomes more complex?

In Moray, north of Cusco, three extraordinary circles of terraces have been cut into the landscape. Archaeologists have established that this pre-Columbian site was a place, not for ordinary planting, but for crop experimentation. Built at slightly different levels, each circle and each terrace within the circle was its own microclimate: grains from colder or warmer areas of Inca territory were nurtured here and gradually acclimatised to local conditions. At any one time there must have been crops grown in the same circle, yet being moved in opposite directions, depending on whether the seeds needed to harden to a warmer or colder environment. How did the farmers keep track?

Experts will have written theses on this question but one answer jumped into my mind: flags. Not so far from the knotted rope idea, each circle might have been marked by a cluster of flags indicating crop, provenance, date planted, direction of movement.

In other words, the Incas may have invented semaphore.